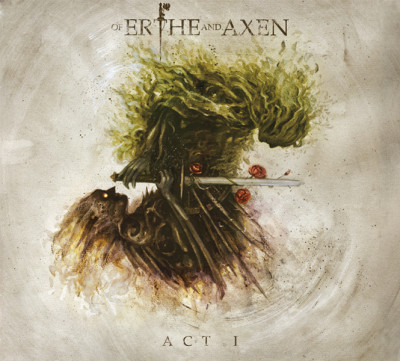 Following the success of their debut full-length, Xanthochroid decided to extend their ambition with Of Erthe and Axen. It is a double album, with Act II released later this year. The album serves as a prequel to the narrative themes in Xanthochroid’s earlier releases and also being grander in every scale than before: more extreme, more delicate, vast, and intimate. Of Erthe and Axen stretches an already ambitious project into near interstellar proportions.

Despite their innovation in the world of extreme metal, Of Erthe and Axen features sufficient portions of the album free of the traditional sound. The introduction, ‘Open the Gates O’ Forest Keeper’, is a three and a half minute long, classical piece; evidence of the grandiose vision Xanthochroid wish to craft with their double release.

As the first track closes in dramatic fashion, its successor, ‘To Lost and Ancient Gardens’, begins with a short duet which again highlights that the influences on this album stretch back to classical and folk music. ‘To Higher Climes Where Few Might Stand’ brings in the first metal elements, in a slow and brooding fashion. It isn’t long though before the culmination of the band’s influences converges into Xanthochroid’s own sound: heavy guitars, clean and guttural vocals in call and response and flurries of brass fanfare epitomise a traditional climax on Of Erthe and Axen.

‘To Souls Distant and Dreaming’, and ‘In Deep and Wooded Forests of my Youth’ further accentuate the subtleties and dynamics of the album. However, this slower pace is carried over into the next two songs, ‘The Sound of Hunger Rises’ and ‘The Sound of a Glinting Blade’. Whilst not disappointing, the album may feel like it plateaus slightly for some listeners.

On the other side of the coin, the two songs are an extended build up into the album closer, ‘The Sound Which Has No Name’. After twenty minutes, the lightning pace with which ‘No Name’ comes out the traps is welcome and exuberating. Xanthocroid certainly throws everything into the final song and leave one in anticipation for the second half. The blend of various forms of metal, folk and classical is refined to a fine mixture here.

With a second act to be released later this year, it is important to respect that Act I is effectively incomplete; the album still provides over forty minutes of listening time. Act I still needs to be able to stand on its own and for the large part, it does. Though there are significantly long passages where the music is slowed down, they tend not to detract from the album in full. As a result, lyrical themes and musical dynamics are more engrossing.