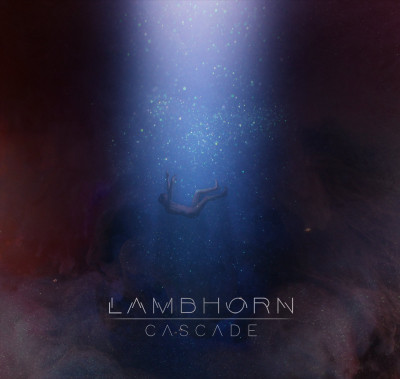 There is something incredibly endearing about bands like Lambhorn. Two years after their dream of playing their hometown’s world-leading math rock festival, ArcTanGent, was realised and after three years of perfecting and recording 6 tracks in a display of patience usually reserved for Xiaolin monks and Waitrose cashiers in Chelsea, their debut album Cascade finally comes to crowd-funded fruition. Listening to Cascade demands much patience in itself; its six tracks and 50-minute run time tell an epic and deeply profound story illustrated, at its most primal level, by a friend of the Bristolian four-piece posing naked for the album cover after throwing back a few of the crispest Somerset IPAs. The current of existentialism runs throughout Lambhorn’s debut LP, a theme expressed entirely through oceanic titles and the savagely moist melodic exposition heard within.

With naught but a frugal 15 minutes of material in their Spotify catalogue, those hitherto uninitiated listeners will find a Cascade of material within the opening 10 minutes on which to ride like a particularly gnarly bombora wave (full disclosure: those with an aversion to water-based puns should skip to the conclusion). Title track ‘Cascade’ follows a seemingly direct linearity from previous EP Earthlight; shimmering guitar echoes away beneath a gently sliding bass and purposefully swells in and out of moments of watery ambience with the use of deliciously wavy guitar bending. After a fleeting moment of confusion as to whether or not you’re listening to the same song (you are, keep up), ‘Cascade’ descends into what could be described as a dark, proggy, thrashy ode to Heart’s ‘Barracuda’ and will hopefully become just as iconic a song when it eventually features on Guitar Hero 12: Legends of Bristol.

If there’s any track on this album that justifies the otherwise tenuous categorisation of ‘surf rock’ it’s probably ‘Spindrift’, a slow progression of distant arpeggios that only the most stoned of surfers would consider ‘hanging 10’ to; and they’d have to be armband-assisted in the kiddie pool. That’s not to say the track doesn’t gather some momentum later on (albeit after losing all of it during another somewhat jarring musical pause), with the song ending on a Lambhorn trademark of wonderful guitar and bass layering along with a plugging of the musical gaps that filled this song earlier on.

The baton is passed flawlessly to ‘Without Waves’ which dazzles with climbing guitar lines and tastefully underplayed melodic icing before continually interjecting with distorted punches to the throat. The aggression eventually slides into a wonderfully decadent Russian Circles-esque exposition with bass fills so smooth you’ll want to put them in a hamster cage and feed them sunflower seeds. The last two and a half minutes constitutes some of the best material on Cascade and shows Lambhorn in their most decisive mind-set; a powerful display of individual flourish from members of a perfect synchronicity.

Simultaneously, ‘Sapphire Springs’ feels like both a seminal moment in the progression of Cascade and a level on Spyro that you couldn’t complete because the soundtrack kept putting you in a trance. Lambhorn have done well in their track ordering to avoid stuffing too much musical ground beef into the bell pepper of Cascade and ‘Sapphire Springs’ is a delightfully twinkly allusion to that. The track is full of truly beautiful moments attained by distant cymbal splashes played under a paradisiacal steel guitar, providing a spacy aesthetic that sits very well at this stage of the album.

Anyone who’s had the privilege to see Lambhorn live can attest to their stellar stage presence, which is achieved largely by drummer Oliver Cocup seemingly fusing with the drumkit and displaying obvious pain during the more heavy-hitting parts. The best exponent from Cascade for such expressions would be ‘The Great Below’, which builds some lovely harmonies until a musical tiger shark arrives out of nowhere, thrashes around for a few minutes and then disappears just as quickly. A little old school guitar solo plays the track out and paves the way for the final and best track of the album – ‘Deeper’; a fantastic dance between guitars and bass which culminates beautifully at the end of every four bar phrase. It’s the shortest song of the album (at a meagre 5 and a half minutes), but has the aura of a song you could listen to until the next LP comes out.

The open-ended question left quite deliberately at the end of ‘Deeper’ suggests there’s more to come from this aqueous saga. The long track lengths and drawn-out passages make Cascade a demanding listen, but one that rewards the listener remarkably well with moments of individual magic and collective beauty in a perfectly levelled mix. This is not an album for the occasional Subway diner meticulously calculating his loyalty points in the hope of getting a free buttered slice of Hearty Italian. Cascade will take ALL of your loyalty points as well as a fairly hefty chunk of your Nectar and Clubcard ones too; but you won’t think for one second that it wasn’t worth it.