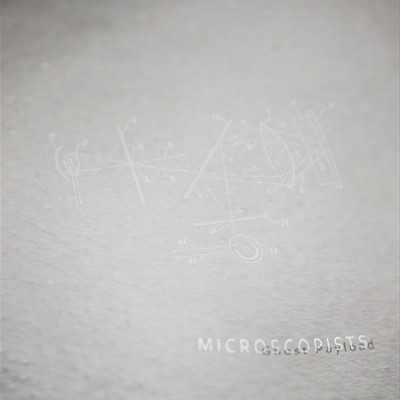 Microscopists are a London-based duo comprising of Robin Fencott and Bed Edwards. On August 31st, their debut album Ghost Payload will be released on Abstrakt Reflections. Robin Fencott is a sound artist that works with instrumentation and technology. He is also the creative force behind Metalogue (London-based cinematic industrial) and one half of Towards Collapse (London-based doom electronic with broken sounding beats and bass). Ben Edwards is a London-based musician and the ex-frontman of the progressive/experimental metal band Miocene (active from 1998-2005). His other projects include Benedict Edwards (acoustic/experimental) and Bait Kush (dreamy electronic with ambient guitars and minimalist beats).

When I first listened to Ghost Payload, I heard hints of Nine Inch Nails, Paul D’Amour (Tool, Replicants, Lesser Key, Lusk, Feersum Ennjin), and Lights Out Asia. The album begins with ‘preroll’, which is an instrumental introduction, made up of eerie sounding post-rock guitars that make for a good lead into track two, ‘Machine to Machine’, which is more of a full instrumental track where the electronic beats come in along with more eerie sounding post-rock guitars. This song actually reminds me of later Lights Out Asia work. Track three ‘Morbid Calculus’ is where I hear the Paul D’Amour influence. It begins with that Tool-esque bass playing and around the 2:30 mark is where Edwards’ first vocals come in. The first line is “the safety nets have disappeared, keep your head down, and shut your mouth”, which gives off a very post-apocalyptic vibe. The vocals also remind me of when D’Amour did the project Feersum Ennjin.

Next up is track four ‘Amber Prisons’, which is mostly instrumental but has Edwards’ vocals sporadically show up in the song with a muffled effect to them. Track five ‘Interstitial’ begins with the bass tone, which flows into ambient/post-rock guitar work and glitch/industrial instrumental beats, which again remind me of Lights Out Asia, or even Bitcrush. Track six which is the title track ‘Ghost Payload’ builds up slowly with sporadic guitar, electronics, and Edwards’ dark lyrics in the middle section, eventually leading into a hard-hitting industrial ending.

Track seven ‘The Shallows’ has a very unique twist towards the 3:30 mark, which sounds like it could be the ending of a post-rock song, but then those post-industrial beats come back in, layering nicely with the guitar to lead smoothly into track eight ‘Deep Mistrust’. This is probably the heaviest track on the album, beginning with slowly building electronics, which leads into a heavy-hitting, industrial metal guitar type crescendo. At around the 4:30 mark it slows down and glitch elements come in until around 5:00, where you hear Edwards’ brief vocals again overtop of a synthesizer that builds up into what you think is going to be another crescendo but it cuts out with static, which I think is very unique. The final piece ‘overlay’ is a noise piece that is similar to and outro, with recordings of people talking underneath of a synth pad and melancholy post-rock guitar. At about the 2:30 mark these instrumentals stop into what sounds, to me, like static field recordings of something breaking or being shut off for the next 36 seconds. It is a very unique and impressive way to end an album.

Fencott and Edwards have very similar but different influences, which always makes for the perfect duo. Ghost Payload is the perfect blend of industrial and electronic music, mixed with ambient/post-rock guitar, and Edwards’ sporadic lyrics that give it an even darker twist. Ghost Payload is one of my favorite albums this year, and what’s very interesting is that I happened to come about it by chance. Without Echoes and Dust RPG Crew Room and Magda Wrzeszcz, I would never have found out about this incredible duo and album that combines my favorite elements of music, post-industrial and post-rock.

Ghost Payload isn’t your typical post-industrial/post-rock album either. Microscopists have created a refreshing, unique, and innovative debut and it easily shows through these nine tracks that Fencott and Edwards are masters of their craft.