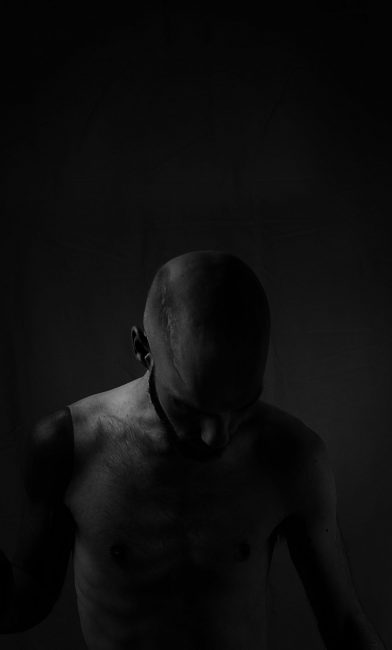 The second full length from Throane is the most fully realised vision of enigmatic photographer / illustrator / designer Dehn Sora.

One of the most stunning trips of the year, Plus une Main à Mordre (“No Hand Left to Bite”) seeks balance between the struggle and the letting go, passing from chaos to quiet in revelatory circular motions.

Like Sora’s visual art, his music possesses a hypnotic, almost hyperreal singularity: ultra-modern meditations crisply rendering the esoteric as familiar and the everyday as phantasmagoria. This is a record of cities as tombs, of failing industry, corroding capitalism, fractured lives, divided peoples, isolationism and lack.

The album is marked by greater confidence in its ferocity and frightening clarity of purpose in its harrowed ambience; finding kinship with greats such as Swans, Blut Aus Nord, Breach and Godflesh in hues of grey doom, post-black metal, post-hardcore and darkest Industrial.

Produced – as 2016’s lauded debut Derrière-Nous, La Lumière – by Samuel Vaney, the mix is haunted by primal screams, submerged intimations of speech and disembodied voices lost in a magma of filth, effluvia and strange beauty. Drums are performed with brutalist precision by Gregoire Quartier (Cortez).

The concluding title track opens up to feature guest vocals from Sora’s close friend Colin H. Van Eeckhout (Amenra, CHVE), Sylvain (Incivil Tragedia) and fellow graphic designer Valnoir who join in unison as if a sect, hidden in graffiti tunnels communing misremembered echoes of love, looking beyond the human for commonality as towers erupt in conflagrations of psychic disillusion.

Plus une Main à Mordre is released today through Debemur Morti Productions and is available on CD, LP and digital download.

Listen to the album in full here: