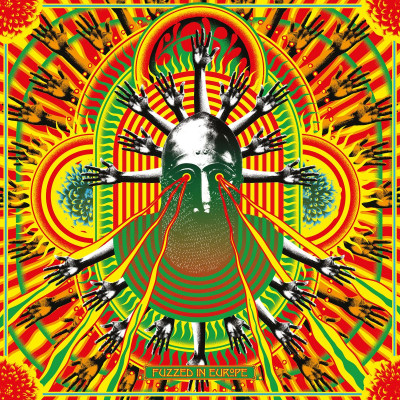 Fuzzed in Europe by Goat

On October 27th Rocket Recordings will be releasing a limited edition vinyl and digital recording of six live tracks recorded by Goat during their 2016 tour, promoting their third album Requiem. (This being Rocket Recordings the physical album comes in very tempting coloured vinyl options, so hurry!) The six tracks included have been chosen by the band as they are markedly different from the studio recordings and show the band at the full extent of their powers.

I was lucky enough to catch them live earlier this year, and for me, it’s where the band really make sense, their performance turning me from mildly appreciative into a proper fan of the band. Goat’s heady live mix of psych rock, world music, theatre and ceremony; the masks, the robes, and the dervish-like lead singers all combined to give me the chills in a similar fashion as to when I used to see Jane’s Addiction during their heyday. It’s more than rock a show, cult-ish but inclusive, a celebration of otherness and the mysteries of the universe.

Things begin in perhaps, expected fashion with ‘Talk to God’, wah wah guitars, chanted vocals and rock drumming, growing in power with muscular bass and an urgent Tinariwen-esque guitar riff into a full on freak out. Lovely stuff.

With all six tracks being of considerable length I was expecting every one to be a full on blow out of Sufi-spin psych but next track ‘Time For Fun’ wrong foots you in a delightful manner. Almost skeletal in it’s make-up, it is based on incredibly hypnotic afrobeat drumming and mere shades of synth and a lonely, desolate sounding guitar licks.  It highlights the incredible musical skill of the band, perhaps sometimes obscured by the imagery and energy. Nothing else here is as impressive, although every track is equally enjoyable.

‘Gathering of Ancient Tribes’ wins out as the most giddily, danceable song in a very strong field, even seeing off live favourite ‘Run To Your Mama’, which does though have stonkingly great fuzzy riffs. Yes, Goat really can rock with the best of them.

I’m not actually much of a fan of live albums, but if your chances of catching Goat in concert anytime soon are remote then you can certainly get a feel for them on Fuzzed in Europe. Just play loud and add friends, robes and intoxicants for the full effect.