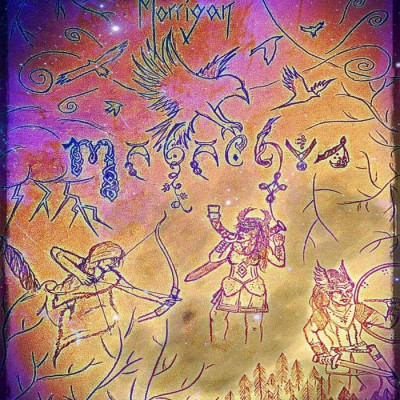 Unconventional in the truest sense. For me, this is the best statement I can use to define the sound of Mabachus. Having been aware of their music since almost the beginning of my venture into Toronto’s slowly growing progressive music scene, I’ve always found something so uncompromising and original about their unique brand of music.

For me, originality in music is almost something relegated to past musical landmarks. It seems as though everything has been done these days and that musicians are either leaning too heavily on influences, or rehashing past glories. What is refreshing about Mabachus over their now four EPs is that they refuse to conform. Giving off a defiant mix of prog, metal, and jazz fusion, the four-piece make a point of not doing things by the book. Entering their newly released fourth EP Morrígan, the band keeps their sound intact while showing a growth that fits the band perfectly.

Starting off the five quick tracks is the title track. Multi-layered vocals (a mix of chanting and various vocal athletics) that come off as instrumental is the point of this short track, which is quite a feat. It definitely shows off the vocal dexterity and prowess of Sandra C Yeomans, and her great ability to impress these ears yet again. ‘Thurisaz’ follows with heavy riffage right out of the gate and the fevered drum and bass that I’ve come to expect from Mabachus. Yeomans’ use of different vocal techniques on this track shows a passion and dedication to always improving her already impressive talent.

‘Ehwaz’ is laid-back and dark in a way for the majority of the song, with the last minute of the track getting playful and ramping up the energy. There’s a great focus on the drums and bass making their own noises but contributing to the overall sound at the same time. ‘Fehu’ starts off with menacing guitar and drums which quickly dissipates and goes into a low-key technical interplay with all three instruments. The tenor sax provided by Kenny Foster adds another great flavour to the band’s beautifully jumbled sound. This is probably my favourite track on the EP.  And last but definitely not least, ‘Othila’ showcases more of a metal drive than most of their core sound, especially with skinsman Dave Foster pummeling his drums with precision. Guitarist Jeff Aymer and bass player Travis Foster are in great sync here, playing off each other really well.

Where the bands previous material straddled a fine line between metal, prog and fusion, I find that the band has evolved more in their sound. While still being playful as hell with their arrangements and keeping their directive as original, they have seemed to embrace a bit more of the distorted side of their sound. This is evident the most to me with guitarist Jeff Aymer, who goes for more of a straight-forward approach than his previous recorded output. Less noodly and more to the point. I’m all for playful guitar banter with the instruments, but with this recording he’s able to stay branched out while anchoring the sound when it’s needed, which shows a good use of knowing one’s place in the creation of the music.

Yeomans continues to shine brightly and gives the impression that the best is yet to come from her vocal ability. Both Travis and Dave Foster also continue to prove how important their instruments are to making this sound complete, with precision and focus used at all levels.

While it’s hard to only receive a quick release off these four talented people once in a while, it also makes me realize how the wait was worth it. The band opts to focus total energy in a limited number of songs, and I’m okay with that as long as the sound always stays true. It’s another winner from these evolving musicians.