(((O))) Review: Slabdragger / Wren – Mothers of Beef and the Magic of Invention 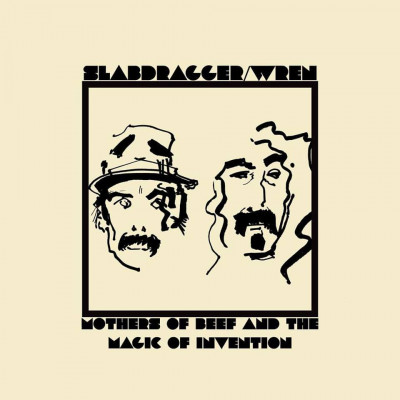 Split singles are a wonderful thing; bands playing obscure non-album tracks, bands playing weird deconstructed versions of album tracks, bands covering each other’s songs, bands covering other people’s songs, field recordings of your dad and my dad snoring on either side of a limited edition C10. You name it, it’s probably happened. On Mothers of Beef and the Magic of Invention, big London doom boys Slabdragger and Wren try their hand at covering Frank Zappa and Captain Beefheart, respectively. This split 12” is due out via Holy Roar on the 27th of October.

Slabdragger’s ‘Muffin Man’ stays relatively faithful to Zappa’s original, and yet clocks in at almost double the length. As you might expect, things are slowed down somewhat, but not enough to account for all those extra minutes. No, the main culprit is Slabdragger’s gleefully incessant repetition of that riff. It is obnoxious, it is unhinged, and it is incredible. Every second of this track is practically overflowing with a delirious sense of fun, and it feels like the treatment that riff has always deserved. Of course ‘Muffin Man’ was practically a stoner rock song anyway, but where their contemporaries might have made things dank and sleazy, Slabdragger defiantly scale the anthemic, fist-pumping heights they hinted at on Rise of the Dawncrusher but never quite reached, and they do it with a great big shit-eating grin on their faces.

Of the two originals, ‘Electricity’ is perhaps the more challenging to cover, and Wren tackle this dilemma by truly making the song their own. Both bands sit pretty comfortably under the doom umbrella, but Wren veer more towards post-metal than Slabdragger’s particular brand of stoner mischief. Their Beefheart rendition is barely recognisable, and whilst the dramatic change is undoubtedly impressive, this melancholic interpretation lacks the original’s frenzied urgency. It isn’t a bad track by any means, but it does fall somewhat flat immediately following Slabdragger’s utter barnstormer. With that said, the militaristic precision of these riffs is awe-inspiring, and meets its match with a suitably relentless vocal bark.

Unfortunately Holy Roar’s press release doesn’t address whether or not either band followed Captain Beefheart’s ten commandments for guitar whilst recording this split, but it seems safe to assume that they’ve been practicing in front of a bush, and keeping all their hats on.