(((O))) Review: Dialects – Because Your Path Is Unlike Any Other 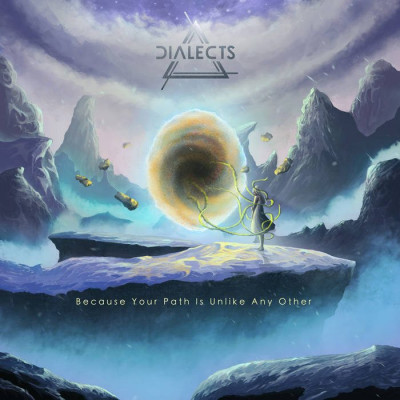 Because Your Path Is Unlike Any Other by Dialects

For about the first 30 seconds of Dialects’ debut album Because Your Path Is Unlike Any Other, you’d be forgiven for thinking that you’re in for a gentle post-rock ride. Then, there’s a gradual build of white nose and a short pause. Immediately afterwards, the record reveals itself to be something more fun, and much, much louder.

Because Your Path feels like a natural progression from the group’s 2015 EP L.T.K.L.T.L. (Let The Kids Light These Lanterns). There, the post-rock influences of bands like fellow Glaswegians Mogwai were obvious, soft chords and twinkly riffs sitting snugly between heavier, mathy sections. The spacey effects that lent L.T.K.L.T.L. an ethereal feel are still here, as are the intricate, evocative melodies. But Dialects have definitely taken things up a gear.

The first half of the album takes an unrelenting, math-heavy stance. Infectious hooks and shredding guitars abound. Little warning is given as songs take repeated, rapid-fire changes in direction, but somehow these twists and turns never feel too abrupt. Many of the songs on this album have something of the old school about them, Russian Circles meets hardcore band Hopesfall. There’s also room – on funk-heavy, ‘Illusory’ for instance – for some fun. In places here, it’s hard to dispel a pleasing mental image of ASIWYFA having a fist fight with the Mighty Boosh’s Howard Moon and his slap bass. This might feel confused in less-skilled hands, but Dialects’ technical skill and storytelling ability instead make for a thoroughly enjoyable journey.

At the midpoint, ‘When you die you’re truly alone’ provides some welcome downtime. A melancholy guitar guides listeners through a bittersweet soundscape that has echoes of Maybeshewill. And in the latter stages of the album, the band really hit their stride, the heavy elements of the opening tracks blending beautifully with more introspective, quieter moments. In particular, the album’s penultimate eponymous track is a stand out: simultaneously heartfelt, shimmeringly uplifting, funky and brooding. I can’t wait to see it live.

In all, Dialects have succeeded in building on the ideas from their first EP to produce an exciting, nuanced full-length. Because Your Path might not break major genre boundaries, but it is an entertaining and interesting listen. It’s an album that gives that fans of math rock plenty of treats to enjoy, whilst managing to avoid being so niche that it will put off newcomers to the genre, attracted by the favourable reviews the band have been receiving. Dialects’ star is undoubtedly on the rise. I look forward to seeing what comes next.