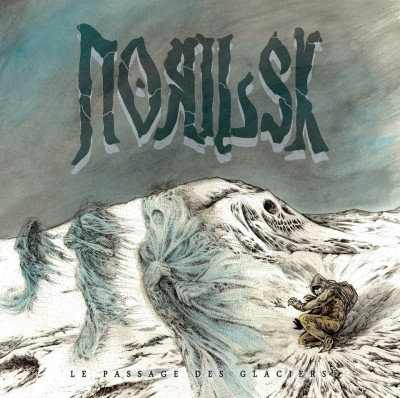 Ethnomusicologists have frequently read the significance of place onto various traditions. I’m still not sure about the ethics of that; I think it’s a bit of a reductive move at the very least. But, if we follow R. Murray Schafer, who hails from Canada like Norilsk and who has written several books on acoustic ecology which are must-reads for fans of outré music, we can understand certain works of music as engaging in a relationship with nature, a relationship that is both mimetic and complementary. Le Passage des Glaciers is one of those pieces.

The tracks are spell-binding. They tumble down the glacier like a moraine, but they also instantiate that flow – the opening riff tells you exactly what you are in for. When one thinks of glaciers, one thinks of hunks of ice. But this ice is alive, crackling with life, like the wiry guitar-driven opening to ‘Namolennye’. This is death metal played low, slow, and with an eye towards drone. And it’s all done in a profoundly natural way, with very few shiny baubles and tricks – which makes it all the more impressive that this album never sags. The musicians in Norilsk seem to have perfected the art of knowing when to make subtle changes in the music to avoid any moments of distraction.

Of course, the glaciers are disappearing. Reading the title of the album, one can see a few meanings in “passage”. The obvious interpretation is the passage of the glaciers through space. But there is also the passage of glaciers through time, and in this historical moment, the glaciers are facing great precarity. The two tracks which are labeled as parts of the passage, ‘Ghosts of Loss’ and ‘L’érosion’, bear titles that speak to this meaning. Glaciers will never truly be forgotten, though they might disappear; even if mankind manages to destroy itself, the beautiful scars of the Earth will bear witness to their existence. Their trace, in other words, will remain, ghostly and ethereal, two adjectives that apply equally well to this album.

This is music for the haunted place, the celebration of nature, in all its contemporary insecurity and all its past destructive beauty.