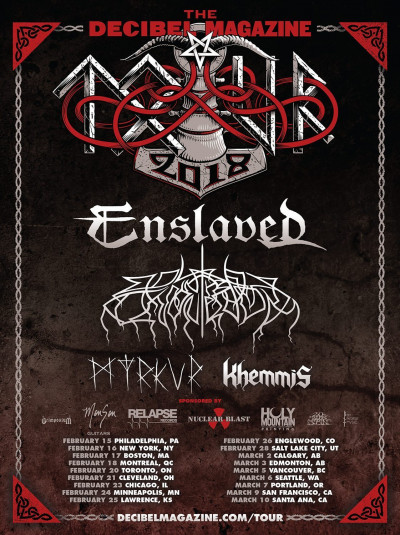 Enslaved at The Phoenix Concert Theatre

After dealing with a brutal winter in terms of fluctuating temperatures, it was only fitting that I ventured out to the fabled Phoenix Concert Theatre in Toronto to see The Decibel Magazine Tour and the frosty Enslaved as headliners.

The drizzly and unseasonably warm evening was a nice backdrop for the mood of the bands this evening, and after heading into the venue and seeing a decent size crowd already gathered for the first slot of the night, I could tell we were in store for a great group of fans that usually doesn’t flock to the clubs on a Tuesday night.

Colorado’s Khemmis were the first act to start the evening off in punctual fashion.  Playing only four songs focusing on their newest album Hunted and their debut Absolution, it was my first chance to have a proper listen to these four doom-metal merchants. While doom isn’t my usual cup of tea, I found that the band played with great emotion and made use of their limited opening slot. A highlight for me was the twin-guitar melodies that co-vocalists Ben Hutcherson and Phil Pendergast grooved out on stage, as this harkened back to an era when this was very much in style.  Does it work here?  Absolutely. This is a band that could grow on me for sure. 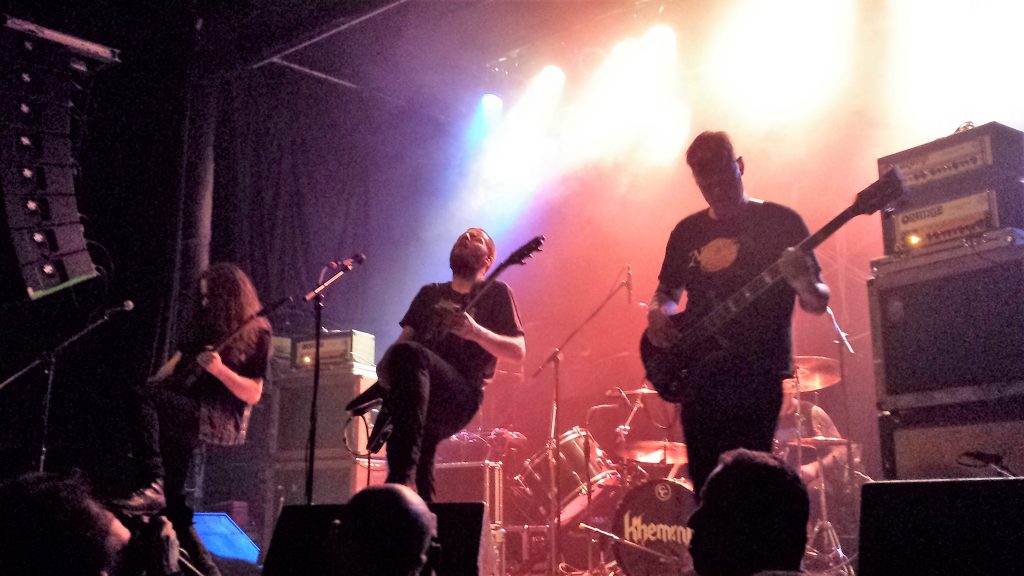 A little puzzling to me was the placement of Norway’s controversial Myrkur, when I would have thought they would have come right before the main event of the evening.  It just seemed interesting to me as I find them to be quite in the limelight these days, but I didn’t book the tour, now did I? The band, fronted by vocalist Amalie Bruun, has been a highly anticipated group to see as I’ve been following their output since day one. People can say what they will about Bruun’s credentials and whether she is or isn’t suited for the music she creates in underground terms, but she looked as legit as anyone can to me when evoking pure love and emotion to her song craft in a live setting. 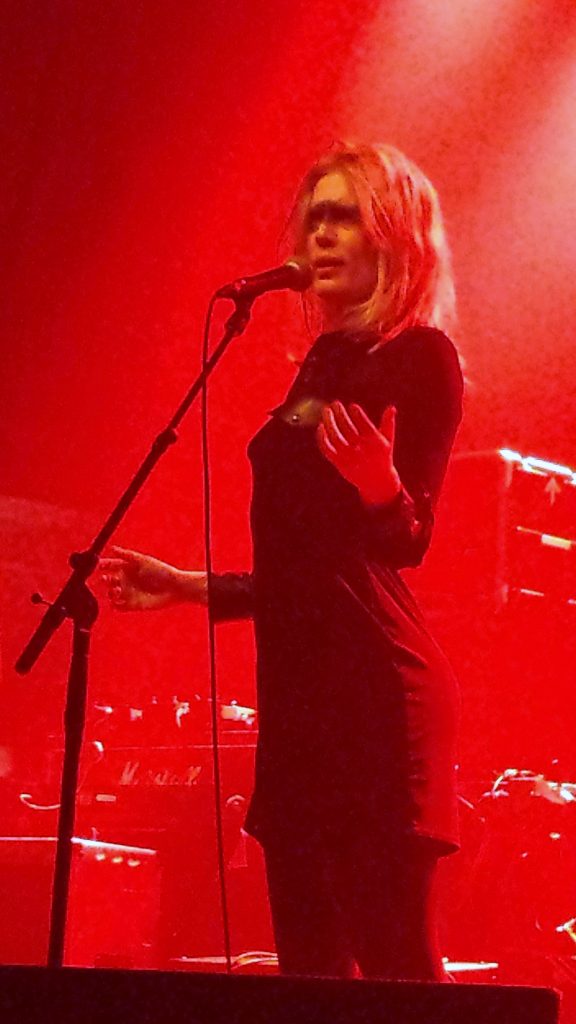 ‘The Serpent’ started off the set, with ‘Ulvinde’ following, showcasing the might and emotion of the latest album Mareridt. With a black streak across Bruun’s eyes (complimenting her black outfit) and the rest of the band wearing sleeveless hoodies and looking ominous in stature, the stage presence gave off the proper eerie feeling for their blend of folk meets black metal. ‘Onde Børn’ was the track that first drew me to the appeal of the musical outfit, so I was pumped to hear this in a live setting, and wasn’t at all disappointed by the result. ‘Ulvesangen’ from the debut EP worked well to show the beginnings of their sound, and the set was rounded out by ‘Måneblôt’ and ‘Elleskudt’ from the current album to send the fans off with a memorable performance. For my first experience seeing the group I’m salivating for more, and can only hope a headline tour might one day come back to this area.

Wolves In The Throne Room were next up, and I was curious to hear them as I’ve been noticing quite a buzz around their sound. I figure going in fresh in a live setting is a good way to gauge a first impression, so here we go. Out of a combined four songs played, the first three were courtesy of 2017’s Thrice Woven (‘Born From The Serpent’s Eye’, ‘The Old Ones Are With Us’, and ‘Angrboda’), and the set finished with ‘I Will Lay Down My Bones Among The Rocks And Roots’ from Two Hunters. While performing a mix of black and doom, they came forth as intense and dominant in performance. They played well and gave off great emotion, however it just didn’t click for me for some reason. Perhaps listening to them on headphones while closing my eyes would be the best approach. Regardless, they were a solid act that I will be trying to follow up on with more attention to be paid in the near future. 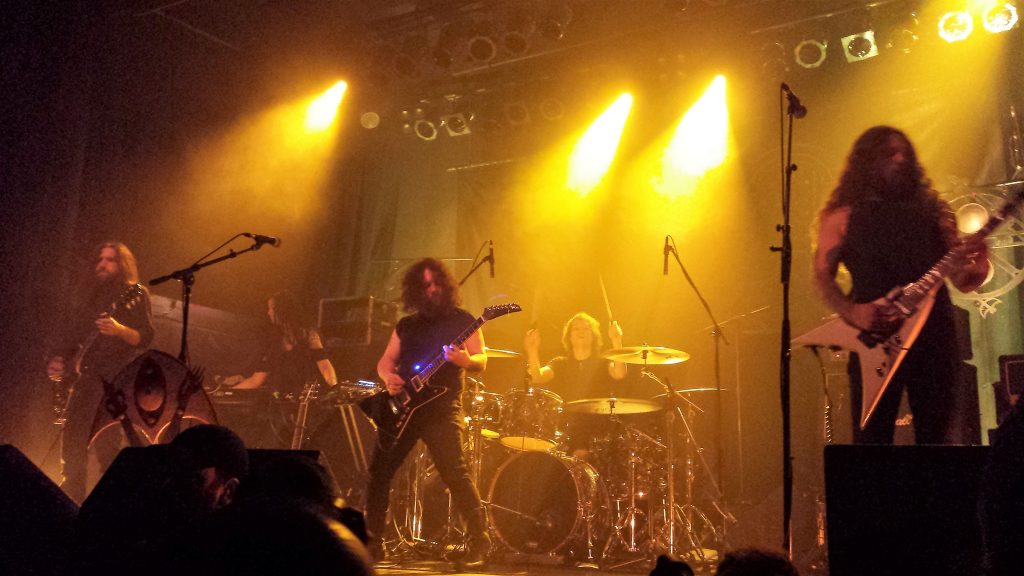 And after three solid sets, it was time for Enslaved to return to Toronto after a memorable set in support of Between The Buried And Me the last time around. If anyone of you has read my review of their current album E, you’ll know that it was a major highlight of 2017 for me; so hearing some of the new material and old classics in 2018 had me drooling in anticipation.

‘Storm Son’ started off the set, the same as it starts off the current album, and was a real treat to hear live. ‘Roots Of The Mountain’ from the excellent RIITIIR followed, and showed how seamless and excellent the band’s transformation has been in this decade so far. ‘Vetrarnótt’ came next to represent the early origins of the band, while ‘The River’s Mouth’ brought us back to the present. ‘One Thousand Years Of Rain’ represented the excellent In Times with one of my favourite tracks from said album. 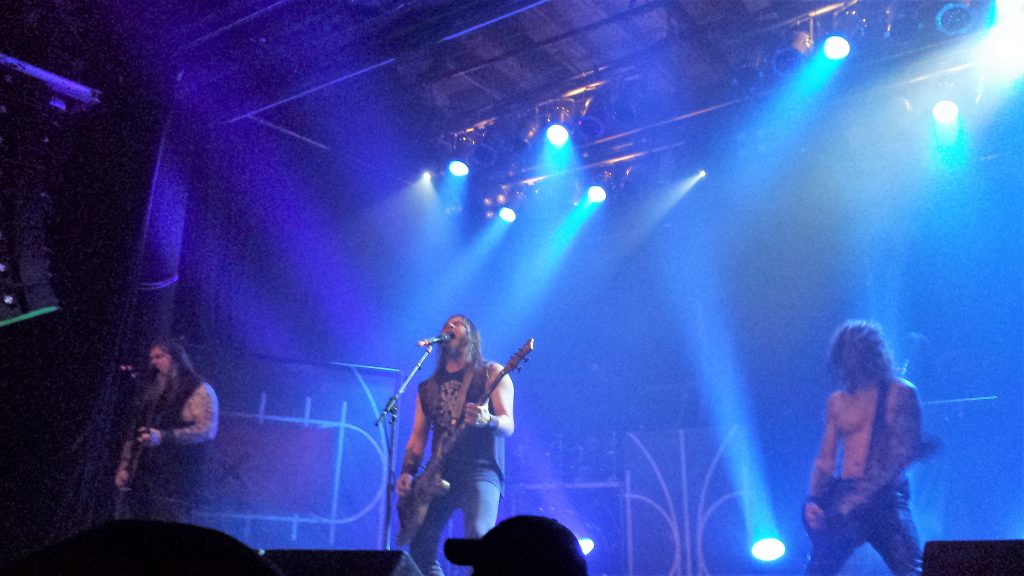 ‘Sacred Horse’, which is probably the standout track to me off the current album, was belted out after frontman Grutle Kjellson kept asking what the crowd wanted to hear. A daunting task for sure, but there were enough people that mentioned this song that you knew it would go over well with the crowd, and it certainly did. And after what seemed like such a short set due to how transfixed I was by the output, the boys played us out with ‘Isa’ and sent the crowd home happy.

This is the second time for me seeing Enslaved, and they consistently have an incredible presence and passion for their performance. Everyone was in top form, and it was great to see Håkon Vinje take over on keys and vocals and fit in perfectly with his new bandmates.

As previously mentioned, for a Tuesday show, the crowd was ferocious (at times starting a pit) and ate up every band and came out in droves. That’s a positive for not only live music, but heavy music to draw a great crowd on a not so stellar night to book a show. A great time was had by all!