(((O))) Review: Horizon Ablaze – The Weight Of A Thousand Suns 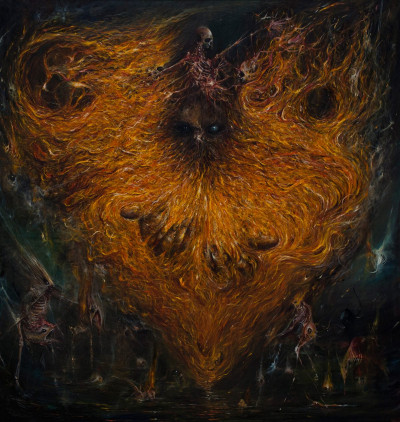 The Weight Of A Thousand Suns by Horizon Ablaze

I keep wondering with the start of every year if we will find a band that will help set the right path and give other bands the feeling of what setting the bar truly is. Sure, we get some that have fantastic releases, but sometimes the memory fades after a while.

I don’t feel like that’s the case with Horizon Ablaze and their newest (and third full-length album) The Weight Of A Thousand Suns. With a weighty and powerful sound that pulls no punches, yet giving off some introspective looks into a deeper sound, the band have given their fans a masterful product.

The album kicks off with ‘Sleep Is The Brother Of Death’. A barrage of forceful drums and guitar notes lead into a melodic black / death metal push with an emphasis on black metal-ish vocals. The song ventures between blast beats and a punishing mid-paced pummelling, and serves as a great introduction to the album as a whole. ‘Delusions Of Grandeur’ follows with razor-sharp distorted riffing that comes at you in complex patterns with more of an immediacy than the opening track. Impressively, there’s some soaring clean vocals that come out of nowhere, which compliment the blast beats and dominant force of the mood of the track. This track shows a great progressive emphasis without losing their ferocity. This may be my favourite song on the whole album.

Venturing towards the end of the first half of the tracks, ‘Ghost Of A Previous Nightmare’ shows off guitar hooks and intricacies with a strong emphasis on the brilliance of drummer Kevin Kvåle, while ‘She Who Walks Upon The Sea’ keeps the intricate and dark compositions on a roll, once again with impressive drum theatrics.

‘The End Of A Dream’ gives us delicate guitar picking that mixes well with cleanly sung vocal passages to bring down the rampant pace of the first half of the album, and to give us all a bit of a breather before ramping up again and hammering out a dominant onslaught. This song is a great example of how to show the mood and emotion behind the band’s songwriting, making you feel every word and beat that’s thrown at you.

Another highlight is ‘My Soul Divided’. Amid all the heaviness and great riffs, the band surprises me yet again by throwing a tiny bit of acoustic guitar into the mix at the start of the song. However, those very riffs I just mentioned are fucking crushing and brutal, and the drums work to enhance this punishing sound that much further.

I love the forceful push of the music via all instruments, which keeps the interest peaked, and shows the passion that all players throw into this project. And while I’m never usually a huge fan of black metal vocals, Stian Ruethemann has quite a large depth to his pipes, staying ferocious and forceful yet evoking a ton of emotion.

In terms of the bands progressive elements to their sound, each song doesn’t draw out too long and feel boring. Every song is put into an explosive package and once the point is proven, it’s off to the next musical adventure. Comparatively, Emperor in their later years is a good way to show you what the band is aiming for; brutal at times but inventive.

The album gets more exciting for me and permeates more with every listen, so I think it’s safe to say that the luster won’t wear off any time soon from this platter of metallic goodness.