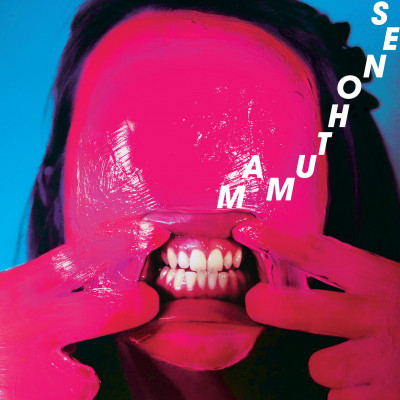 Fear On The Corner by Mamuthones

Italian psych-weirdos Mamuthones have been around for a while now but their first album for Rocket is a decisive statement of intent for a new phase of the band. The title Fear On The Corner suggests we might be in for a dark and queasy ride and the cover image features a weird sinewy monster mask with no features but bared human teeth, lips clawed back by its fingers. Its air of feral menace is only undercut by the lurid, hot pink colour of it. As if the xenomorph from alien had too many cheeky vodkas getting ready to go out clubbing, got a bit over excited and coloured her whole face in with a garish new lipstick.

This tension between carnivalesque celebration and something darker below it bubbles away through the album. At first it seems mysterious just what there might be to fear, and on what corner, with a tight percolating groove ‘Cars’ seems to kick off in a busy, bright square, the vocalist swaying like an amused drunk yelling at “cars! the people in the cars”. ‘Show Me’ sounds for all the world like The Fall before settling into a scratchy groove for the second half. This loose structure repeats across the record as the songs quickly resolve into open ended, up tempo, percussive grooves.

They keep it tight for the album but you can imagine any of them spiraling out to two or three times their length as the mood strikes in a live setting. Title track ‘Fear On The Corner’ has the feel of a procession swaying through the town, random observers pitching in on beer can cowbell and call and response chants. Mamuthones take their name from mysterious masked figures central to traditional Sardinian folk rituals. What exactly they represent is the subject of some debate but they appear to conjure both joy and terror by opening a link to a primal, prehistoric past. It seems the band are doing a decent job of channeling a little of that into their music.

A couple of years ago they put out a cover of the Stones’ ‘Sympathy For The Devil’ that rode an LCD Soundsystem beat. It’s ok, (it’s nothing like as great the Laibach version) but it serves as a perfectly illuminating sketch of elements they were looking to pull together in their sound. New drummer Andrea Davi is obviously owed a fair amount of credit for helping them achieve this, bringing a restless polyrhythmic urgency that makes it hard to stay still. While it’s possible to dig in and make the LCD comparison, truthfully it’s a little off the mark, more like they draw on similar sources in Krautrock, disco and the tense post-punk funk of the big band version of Talking Heads.

This is particularly vivid on ‘The Wrong Side’s fidgeting groove and equivocal chant of “I can dance, in the, in the sunshine, I can lose, I can lose my control”. ‘Alone’ starts with an ‘I Zimbra’ pulse but breaks open into a soaring, oversaturated melody line and racing disco beat before slowly dissolving in a lake of abstract wah wah guitar floating on a deep bass pulse. It marks the point the carnival procession leaves the town and winds out into the open losing some of its vibrancy and direction. So far it’s been unclear what we might fear, more a case of dancing our cares away, dancing in spite of them but ‘Simon Choule’ has a markedly darker feel to it. The busy dance rhythms give way to a stark and relentless beat, urgent bass and unsettling whispered vocals. It sounds haunted.

Lengthy closer ‘Here We Are’ sees the band lead us back towards the caves of the occult psych scene that birthed them, the groove is deeper and slower, an ominous drone rises and falls. The heat of the sun and the frivolity of earlier have gone, the bottles are empty and blank, monk-ish chants fail to obscure distant screams. Sardinia becomes Summerisle, it’s all gone a bit ‘Wicker Man’. It’s a chilling end to a generally upbeat record that sees the band combining the many elements of their music into something more focussed, more their own. There’s nothing to fear and much to celebrate.