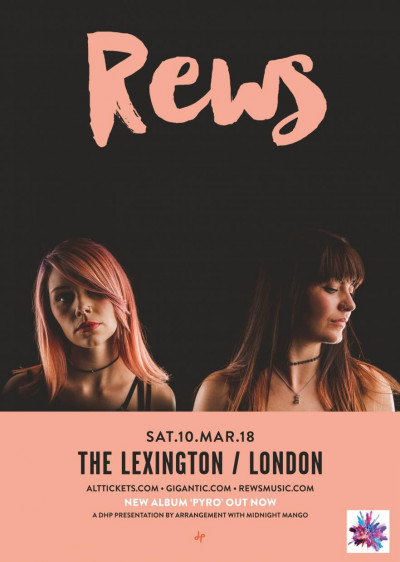 Rews at The Lexington

When I moved to London in October ’17, I hoped to be spoiled for choice in live music, art exhibitions, theatre and more. More culture than a month-old yogurt, I thought. The Theatre; I found. The art exhibitions; I found. The culture; undeniably ever present. Live music, for some reason, I found myself struggling at times to find. Always nice to be proven wrong, the Lexington has proved to me that live music is very much alive in London and of a fantastic standard.

The evening was opened by The Cruel Knives, a powerful four-piece from the Midlands (my old stomping ground) with just enough of a commercial twist to ease things in nicely, but enough edginess to take you by the scruff of the neck and grab your attention. Guitarist Sid Glover treated us to some excellent face-melting solos complemented well by Tom Harris’s seemingly inexhaustible vocal range. The guys put on a lively stage show and were a fantastic reminder why you should always come down early; you never know what treats you might miss.

Following The Cruel Knives were Sick Joy, hailing from Brighton. A little less of a nod to the commercial but with an increase in “edge” to make up for it, the trio of Mykl on Guitar & Vocals, Danny on Bass and Backing Vocals and Drew on the Drums made for a bit of a stark contrast, but not an unwelcome one. Their website describes them as a Heavy Pop band but to me they were a Grunge/Rock band in the finest traditions. Slightly sullen looking while playing, Sick Joy were a charming, approachable group that brought the audience along with them as their set went, and while I’ve never been a fan of the Fender Jaguar jangly sound, there’s no denying that Mykl played it well. The real hero of the troupe for me was Drew though, unassuming at the back, there some really tasty drum beats that I thought were great and caught my attention.

And then, with little ado, Rews took to the stage. Recently making their Radio 1 debut, Rews look to be heading for big things; and it’s easy to see why. Rarely do a duo come around that have such a depth of sound and strong stage presence. And with some killer songs to boot. With their trademark harmonies and crafty use of effects pedals, Rews immediately had the crowd on side and owned the evening in every sense. We were treated to all of the “hits” through the set, and though it may be a bit of a cliché to say it, the singles are, in my opinion, the singles for a reason. ‘Shake Shake’ was a true stand-out song as was ‘Miss You In The Dark’, and not just because they’re two of the ones you can listen to on Youtube and are more familiar with. Not to say that the other songs aren’t good because they are but, in some ways, there are similarities in the non-single tracks that make them harder to differentiate. I’m already looking forward to the second album to see what innovative ideas they come up with to break their own mould. Overall, Rews were just as personable and charming as ever and hit us with a high-octane set that was a perfect demonstration of why people are starting to take notice of them; and it was little surprise to see that once the main part of their set was over, people were clamouring for more.

Rews are stars in the making, and I think they really demonstrated it. If you get the chance to see them in a smaller, more intimate venue, do so while you still can. I have no doubt that they could be playing in much bigger venues before long. And I, for one, wish them the very best of luck and hope it does happen.