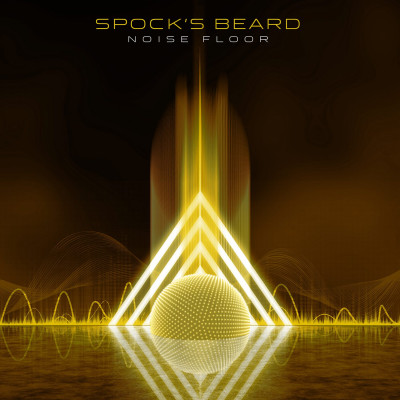 My interest in Spock’s Beard started upon hearing 1999’s Day For Night upon its release. I loved the positive and upbeat energy of the group, and was amazed by their chops and presentation. This love affair continued with V the next year, which outdid the previous album by a mile creatively speaking. And after their ambitious (and critically acclaimed) concept album Snow, it was time for main songwriter and vocalist/guitarist Neal Morse to leave the fold, with drummer Nick D’Virgilio taking over the vocal helm. With future releases, I saw my interest in the band wane. I can’t say for sure if it was due to the departure of Morse or perhaps I found their sound moved away from my musical interests at the time.

So when I found out that the band was putting out their 13th album this year in the aptly titled Noise Floor, I figured I’d see if I had been missing anything from the veteran progressive rock stalwarts. Going into the new album, I was made aware that D’Virgilio had left in 2011 and Enchant singer Ted Leonard had taken over the vocal aspect, while Jimmy Keegan had taken over full-time drumming duties after being the band’s touring drummer since 2003. Two years ago, Keegan left the group, and in a funny twist, D’Virgilio has returned to the fold to drum on the new album (and according to the band, he is not doing anything further with the group beyond this recording at press time).

I guess I decided to jump back on the train (no pun intended) at the right time, seeing as an original member has returned to the recording process, and after listening to the present day material, I am kicking myself that I ever drifted away from the group as a loyal listener. I can say without question that in 2018, the band is as vibrant and important as they’ve ever been, and staying true to their band ethics, they don’t waste any moments on their latest musical platter.

‘To Breathe Another Day’ starts out the first of eight tracks with a strong and alert up-tempo jam, complete with a guitar solo right out of the gate from Alan Morse. Upon first impression, singer Ted Leonard reminds me of a young Geddy Lee in his exuberant vocal approach, but not as in your face. There’s a great syncopated interplay between all instruments in the middle of the song while Morse and keyboardist Ryo Okumoto slay with back-and-forth solos. This is a great opener for the album that creates real excitement and anticipation for the rest of the tracks. ‘What Becomes Of Me’ follows, and it’s more laid back than the opener, with a good pace and some violin adding layers to the already impressive sound. It’s an easy-going and upbeat jam that demands the listener bobs their head in time to the music.

‘Somebody’s Home’ pulls the sound back a bit with an acoustic opening, and then leads into a lurching and methodical flow with back-and-forth interplay between acoustic and electric passages. I enjoy the stripped-down approach of the meat of this song. More subtle and less busy seems to be the emphasis here, and it shows the emotion of the songwriting without having to rely on flashiness, while at the same time showing how accomplished the band is as musicians after so many years of maturing their craft. ‘Have We All Gone Crazy Yet’ is methodical and laid-back to start much like the previous track, however the band quickly ramps the tempo back up and gets back to an upbeat pattern with the familiar Beard sound. The music ventures into a more heavy and distorted jaunt in the second half of the song before coming back down to the original groove.

Venturing into the second half of the tracks presented, ‘So This Is Life’ could be the best example of the band channeling their inner Beatles while meshing trippy psychedelic pop seamlessly. The song works well to show the expansiveness of their sound and gives us a bit of a breather after the weightiness of some of the earlier album material. Keyboard and guitars complement each other with the great backing of bassist Dave Meros and D’Virgilio to round out the great musicianship of ‘One So Wise’. I love the groove and syncopated energy of all the instruments, with Leonard and his soaring vocals completing the five-piece in superior fashion. If you want to hear the band throwing all their talent at the wall, this might be the standout song on the album for you.

‘Box Of Spiders’ starts off with a retro backdrop from Okumoto that leads into a nice interplay from the other instruments. In an instrumental sense, this song is a great addition to the previous track, showcasing a full-out jam which takes no prisoners. As much as I love how the band has grown as a unit, I do love and clamor for instances such as these where all the players can shine not only individually, but collectively. And to send off the listener happy, ‘Beginnings’ works well to wrap up the album with a strong emphasis on vocals from Leonard and the other members, and shows a strong drive and push that cements the sound not only with their continuous evolved musical future, but with a perfectly melded and carefully constructed prog groove, which the band has made a name on. A special note is to hear a nod to Kansas in the middle section of the song. I’ll let you, the listener, decide which song you think they’re emulating during that particular moment.

As a bonus, the band has added a second disc to the package of tracks that didn’t make the final cut, titled Cutting Room Floor EP. The four songs all sound great but I can see why they didn’t make the final cut (mainly due to the simplistic nature of them), however with how strong the album is, it must have been a chore to select which songs stay or go.

It’s impressive to see at this point in the band’s discography that they have taken to adding more depth than the first phase of their career so many years back. Including more soft sections and a focused emphasis on a laid-back sensibility gives off a great aura of growth and maturity. That’s not to say that the band can’t rip on various solos or get down with some crazy prog wizardry like back in their early days, but to hear the added layers and care taken into the songwriting gives me the sense that they won’t paint themselves into a corner like some prog legends tend to do (and yes, I do consider this band at a legendary level at this point in their career).

I’m happy to say that Spock’s Beard, having released so many albums over their more than two decades of recording, are as passionate and driven as I’ve ever heard them, and they give off a great blueprint of how growth and maturity can be a wonderful quality in a bands career. It can definitely be a fine line to try and master that quality, but the five-piece have shown us how it’s supposed to be done, and are a perfect model for this quality.