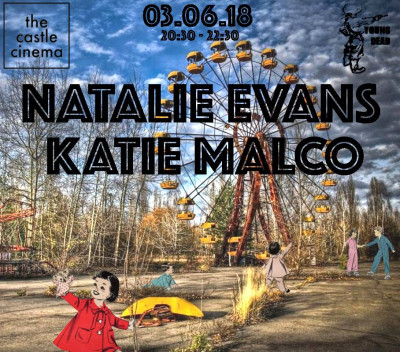 Natalie Evans at The Castle Cinema

The Castle Cinema isn’t the first place where you would expect to see two singer-songwriter performers play among a net of fairy lights, but it’s not your average place. It was built over one hundred years ago as a cinema before becoming a bingo hall, a warehouse, and a snooker hall before returning to its roots as a cinema after a successful Kickstarter campaign in 2016. With a wonderful art deco interior, and a great independent history, it was maybe the perfect place to host two artists at the start of their careers with their own rich histories ahead of them – Katie Malco and Natalie Evans. The seats were bloody comfy too.

With an intimate crowd and the backdrop of a projected starry sky, it was Katie Malco who was first to take the stage with an acoustic guitar and an arsenal of quality quips. Playing through a collection of her downtrodden, reflective back-catalogue she weaved tales of despair, regret, and bleakest of all Peckham. It was an enrapturing performance – her control of the space between notes leaving time for reflection and great weight to every minimalist note – reaching its height in a stirring rendition of ‘September’.

In an event that makes me believe all live music should take place in cinemas now forever, the audio was absolutely immaculate, with each not and string clear and concise. This was one of two similarities in sets that were as different tonally as the sun and the moon – the other being a refreshing humility. With some hilarious, if undeserved, self-depreciating humour Katie Malco brought across two distinct sides of her persona, which informatively juxtaposed the unhedged, personable side that she brings to her music. During a particularly long tuning session she admits: “Sometimes you have to play things by ear, especially when you forget the alphabet.” With her album apparently coming out this year, I’d say she’s definitely worth keeping more than one eye on.

After a brief intermission there was something similar if completely different. Natalie Evans’ recently released debut album Better At Night is a wonderful, wistful celebration of life in all its minute glory, and is one of this years best. Hopping light-footed between acoustic guitar, piano, and harp she glided through a large collection from her new album, and a few from earlier in her career for good measure. I would tell you what kind of harp she was using but I left my harp encyclopedia on the. . . erm. . . bus. . . which is now on fire. . . so we may never know. Moving swiftly on. . .

The harp has a long tradition of being depicted as an instrument of heaven. It is Natalie Evans’ lyrics that bring those heavenly connotations to earth, and make everyday things sound sublime in a fashion that draws comparisons with Joanna Newsom. Even the plight of being stuck in a tree is given a great innocent splendour, as if the experience is the height of life itself. Just like her lyrics, her song craft is light and deceptively simple – creating spellbinding melodies that belie the complex math-rock inspired work behind the scenes. Its an ethereal tone that, just like her lyrics, often end with you in a state of daydream. Similar to a Studio Ghibli film, every note and word comes to life with a unique personality that seems fantastical but safe – as if any trouble that comes your way will have a fairy-tale ending. She explains before her encore of ‘Gymnastics’: “Someone asked me if there was a deeper meaning behind this song. . . there isn’t. Its just about gymnastics.” Its this simplicity and lightness that makes every song so readily identifiable, and so radiant with pastoral grandeur.

The songs themselves were stripped down alternative variants of their album counterparts, with most of the subtle depth of the layering missing without the help of some Jo Quail-esque looping. The warm glow of each pluck of a harp string and the softness of silence between each verse is a more then capable replacement, with the alternative versions being different but certainly far from inferior. For a few days following Evans’ performance its difficult not to look at things in the streets and sky, things that you would often overlook, with complete wide-eyed delight. My old English teacher used to tell me that when writing you must never use the word “nice” to describe anything – Natalie Evans’ has convinced me that I should be using it to describe a lot more.

What a nice time I had. I’m sure I’ll have another.