(((O))) Review: Born To Murder The World – The Infinite Mirror Of Millennial Narcissism 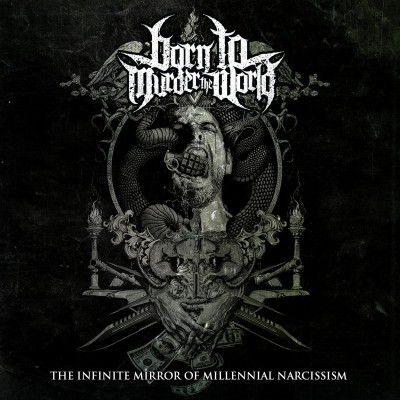 What happens when you take all the blastbeats from an Anaal Nathrakh album and make a record from it? You get Born To Murder The World, the new side project from Nathrakh multi-instrumental maestro Mick Kenney and Napalm Death bass beast Shane Embury. Debut record The Infinite Mirror Of Millennial Narcissism is an album right up my alley and will be released on Embury’s new label Extrinsic Recordings, which will surely be host to some future grind classics.

Mick Kenney is a busy man and one of infinite talent… I’ll do my very best not to ‘fanboy’ all over the place. With his time invested in Anaal Nathrakh alongside touring and production duties and Embury busy with Napalm it seems fitting that this speedy little grindcore gem be the culmination of their long gestated pairing.

Kenney’s production is as always top-notch so all instruments do the damage they were meant to, and oh boy were they meant to harm! His unmistakable drum style that many a Thrakh fan has headbanged to pumps the venomous blood into the tracks as riffs scythe and scathe alongside Drunk of Fukpig’s caustic vocal snarl.

Opening track and lead single ‘Brutality Alchemist’ is a statement of intent kicking things off with a violently simple but devastating salvo with some pounding grind moments. The volatile ‘As He Creates So He Destroys’ lashes with flailing riffs and unrelenting blasts showing absolutely no signs of cooling off. ‘Negativity Plague’ stands as the albums best moment opening with bruising grind and grooving riffs and beats before unleashing a frenetic assault of blackened head rumbling blasts and vocal obscenities.

In the short 13 minute runtime on offer here Kenney and Embury forge some of the most viscious and wicked grindcore of recent years, and to be honest you wouldn’t expect anything less from two metal titans. 8 full tracks form the viscera and 4 interludes act as some sort of respite from the incessant audial terror of this short but damn sweet release. If there were to be any criticism it would be to expand on these interlude tracks as they offer sickeningly pleasant noise to my ears in their brief and teasing runtime, but that’s just fucking selfish.

The Infinite Mirror Of Millennial Narcissism is an explosive beast in a deadly little package, rife with catchy as hell riffs and enough deafening blastbeats to keep any grind-fiend drooling. It’s the furious combination of Napalm and Nathrakh’s extremity fans have waited for. What is in store from Extrinsic Recordings and Born To Murder The World next remains to be seen, but from this stunning record alone the future is very promising.