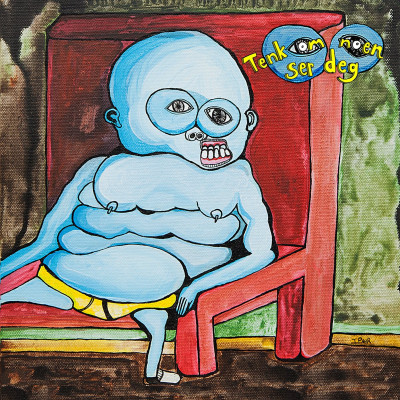 It goes like this – “Det Skandaløse Orkester from Bergen, Norway, are known for being very unpopular,” says the band’s press release. Then there’s a comment on their web page – “this is very good music”, Geir-Atle Johnny Atlesen, manager. Ok, so these guys seem to have a sense of humour, and sure they try to incorporate that humour into their music, and certainly into their lyrics. Of course, that is much easier to recognise if you are fluent in Norwegian. But then, the guys don’t want to be that unpopular anymore, since you can check all the English translations on their website.

As far as possible popularity goes though, that might be a bit harder thing to resolve. Unless, by any chance you are a fan of fun and showtime prog, that is, which means these guys are not only big fans of all things Frank Zappa, but also do their damn best to carry on his musical tradition. And they actually do quite a good job of it. Try for taste ‘Skulle jævlig vært på TV’ which turns into something akin Zappa doing ‘Play That Funky Music White Boy’.

But as might be expected, as is the case with their main inspiration, musically on this you get everything else, from King Crimson (’Skandale Mentale’) to Tom Waits in his cabaret mode (‘Ukomfortabel’) to Stravinsky to Disney cartoon themes and quite a few things in between. And the band, 24 or so musicians on this recording, are able to make all these twists and turns sound easy as a feather, never making it heavy. Heavy as in hard to listen to, since as you might guess, heavy rocking finds its place here and there too (‘Forvirret’).

If you do check out the lyrics, it seems there’s a recurring theme of all the advantages and pitfalls of self-consciousness, all done with the band’s tongue’s firmly in their cheeks. All this adds up to an avant-garde prog album that doesn’t make you run for a handful of headache tablets after you are finished listening, but something that you might decide is worth quite a few spins. With or without understanding the lyrics. In essence, their manager was right – Tenk om noen ser deg (“What if someone saw you”) IS good music.