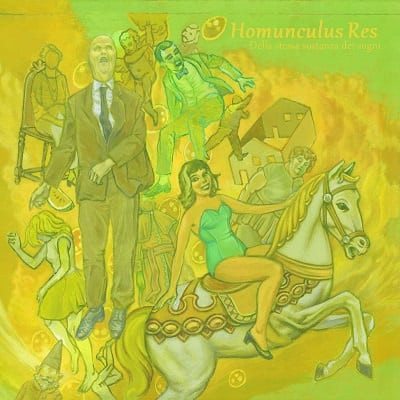 There are some amazing up-and-coming bands who are following the flaming fires of the Italian progressive rock scene from bands such as La Coscienza Di Zeno, Not a Good Sign, or Unreal City, which are for me one of my favourites to carry the torch. Homunculus Res deserves to be on that list too. Since forming in 2010 by guitarist Dario D’Alessandro, their first two releases from 2013 to 2015 have a depth humour, avant-garde, pop, RIO (Rock In Opposition), and the Canterbury scene thrown into the mix. Homunculus Res have always been considered one of my favorites.

It’s been a good while since I’ve listened to their music, nearly five years now. This year they’ve released their third album on the AltrOck/Ma.Ra.Cash label entitled, Della Stessa Sostanza dei Sogni which translates to, ‘Of the Same Substance of Dreams’, the album has this dream-like adventure that awaits for them to encounter more and more of the scenarios of the parallel doors to be opened.

The psychedelic acoustic church organ sounds in the style of the Farfisa in the late ‘60s on ‘Denti Cadenti’ goes into a melodic drum/vocal pattern as the intensive time signature goes into a hectic level as the piano and Moog go into a twist of early Banco Del Mutuo Soccorso. It then heads into a darker area before the elevators open up, with more time changes heading towards the lobby. The mellotron brings us back to the heavens to give one last look before tipping your toes into the waters of Caravan’s music with aspects of In the Land of Grey & Pink.

The Muffins, Dave Newhouse, who appears on this album, and on their second release, Come si Diventa Cio Che Si Era in 2015, lends both Dario and Homunculus Res a helping hand again. Newhouse himself is almost like family to the band, knowing that he’s got their back, no matter what. On ‘Faccio Una Pazzia’ he does this melody between his sax and Dario’s guitar as if duelling throughout their improvisations as Newhouse channels both Van Der Graaf Generator’s David Jackson and Captain Beefheart’s wild sax improvisation he does on ‘Hair Pie: Bake 1’ from Trout Mask Replica.

Listening to ‘Bianco Supremo’ it has this moody sound, as if you are watching the sun coming up. It’s followed by a twist between the rhythms of The Beatles Magical Mystery Tour-era and Motorpsycho’s ‘Close Your Eyes’ from their 14th album, Heavy Metal Fruit for the first minute and forty seconds. Then, it transforms into bits of an overture as the music’s own Rubik’s cube goes into various directions in the styles of Henry Cow’s Leg End.

Petter Hebertsson does a guest appearance on this album on ‘Rimedi ancestrali’. He goes through space and time on his keyboards as the first section of the composition goes into an ascending mystery before the doors open to reveal more surrealism than you’ve ever expected. It’s quite the journey.

Both ‘Se La Mente Mentisse’ and ‘La Casa dei Sogni’ have a vaudeville twist as if Cheer-Accident wrote these compositions during the sessions for Putting Off Death. Alessandra Oria Bollino and Sara Zerilli’s vocals are similar to the styles of Carmen Armillas’ arrangements. When you listen to those two tracks on the album, you can imagine the dancers from the roaring ‘20s to the early ‘30s dancing to the music. More complexities are in store with Lorenzo Leddi’s guitar work and Dario Lo Cicero’s flute loops near the end on track seven.

This is my third time listening to Homunculus Res’ new album. I was completely blown away by this album, you never know what to expect from them. They definitely continue to carry the torch for both Italian progressive rock and the Canterbury sound. So if you want to discover their music, Della Stessa Sostanza dei Sogni is a good start to get you up and running with Homunculus Res.