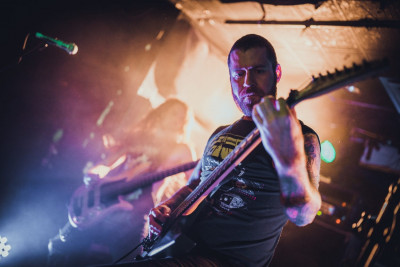 It seems like the bulk of the shows I’ve been going to recently have been on a dreary and melancholy day. I’m not sure why that always seems to be the case, but it’s a definite theme. So on this particular show day, that observation definitely proved legit once again as Toronto played host to a night of some great technical/progressive metal on a four-band bill.

The show, headlined by the veteran act Revocation, with support from newer upstarts Rivers Of Nihil, was held at the Hard Luck Bar. This club is becoming known for putting on some great metal shows in the last couple of years, so I wasn’t surprised that this was selected once again. The dingy and dark atmosphere gave a perfect backdrop for the acts of the night’s event. And for a Monday night show, the place was packed and the energy was seamless from start to finish, which is a tough-sell normally when promoting a show at the beginning of the work week.

After showing up once doors opened and greeting friends, with a beer in hand I approached the front of the stage to see opener Battlebear warm up the crowd to start us off into the evening. What I got from these guys was really a great surprise considering they are fairly new in the Toronto scene and are working on their EP to be released within the coming months. The tight trio performed what I would best describe as crash metal at a breakneck speed. Playing through their songs, they came off as very tight with a high emphasis on the sludge type of intricate metal that has become more popular in recent years. The high energy and big sound really worked well to show that the power trio has a bigger sound than the sum of their instruments. I was quite impressed, and can’t wait to hear them again. 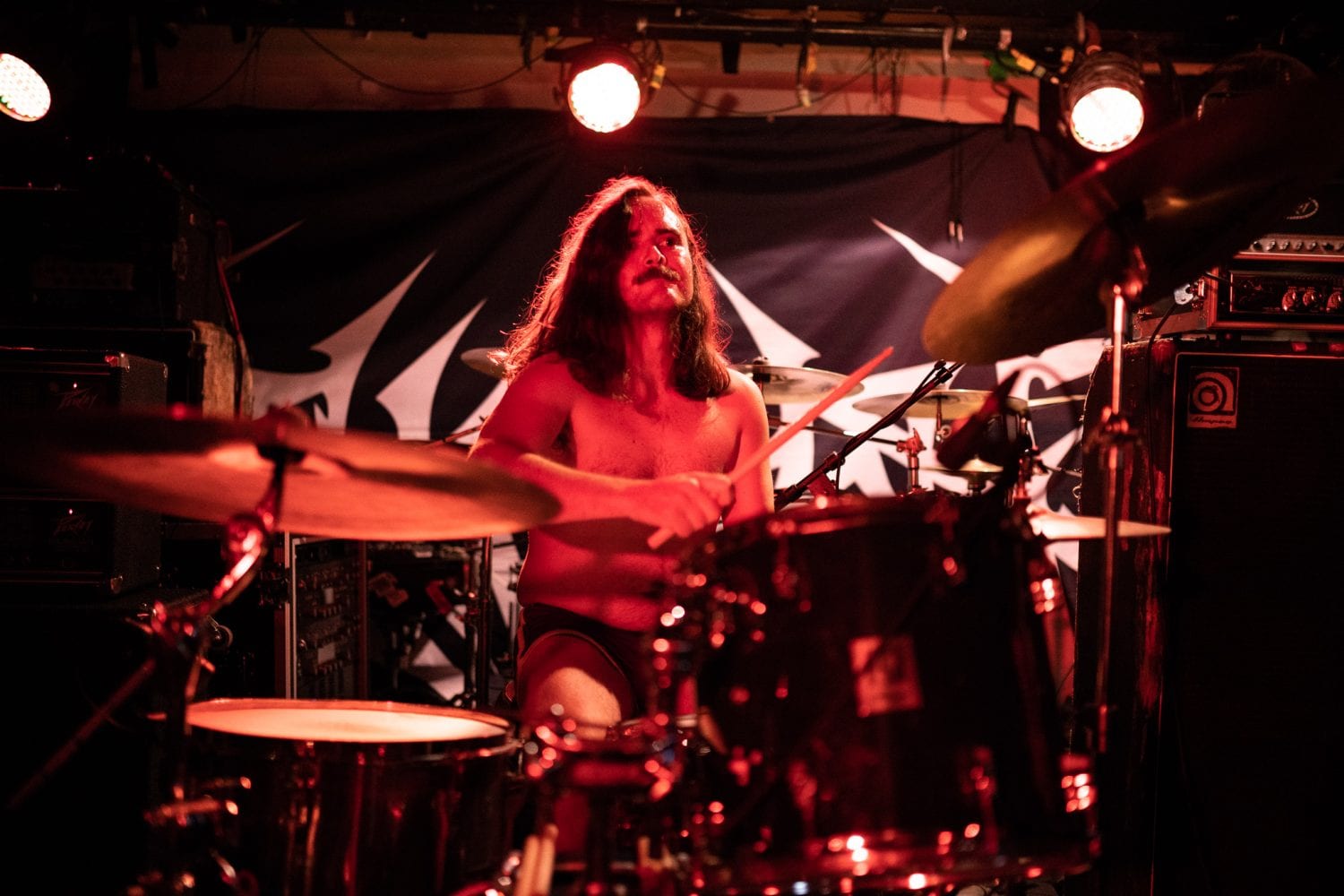 Yautja followed in the second spot of the night, with a sound that came across as slower paced and sludgier than the opener. They put forth a depressive ambiance, where bobbing your head at a mid-pace came across as a perfectly acceptable response to the group’s music. The band, while showing off this lumbering pace for their sound, was very technically proficient and gave us all the sense that the band plays well set in a specific groove. The band belted out a somewhat complicated and involved sound that sometimes came off as a bit complex and looking for direction in places, yet was totally vibrant and full of piss and vinegar in other places. It was a bit of a weird dynamic for me, but the crowd was appreciative of what they were putting forth sonically, and that’s all that really matters in the grand scheme of things. Funnily enough, someone asked how to pronounce the band’s name and the vocalist said “Yow-tah”, which the fan didn’t seem to be able to comprehend in his beer-soaked stupor.

Reaching the mid-way point of the night, I was making myself aware of the fact that both opening bands were power trios that really showed how evolved three members are in the metal realm, and how it can come across as a bountiful and warm sound when done right. You’ve gotta love all those complex sounds meshing through just three instruments. 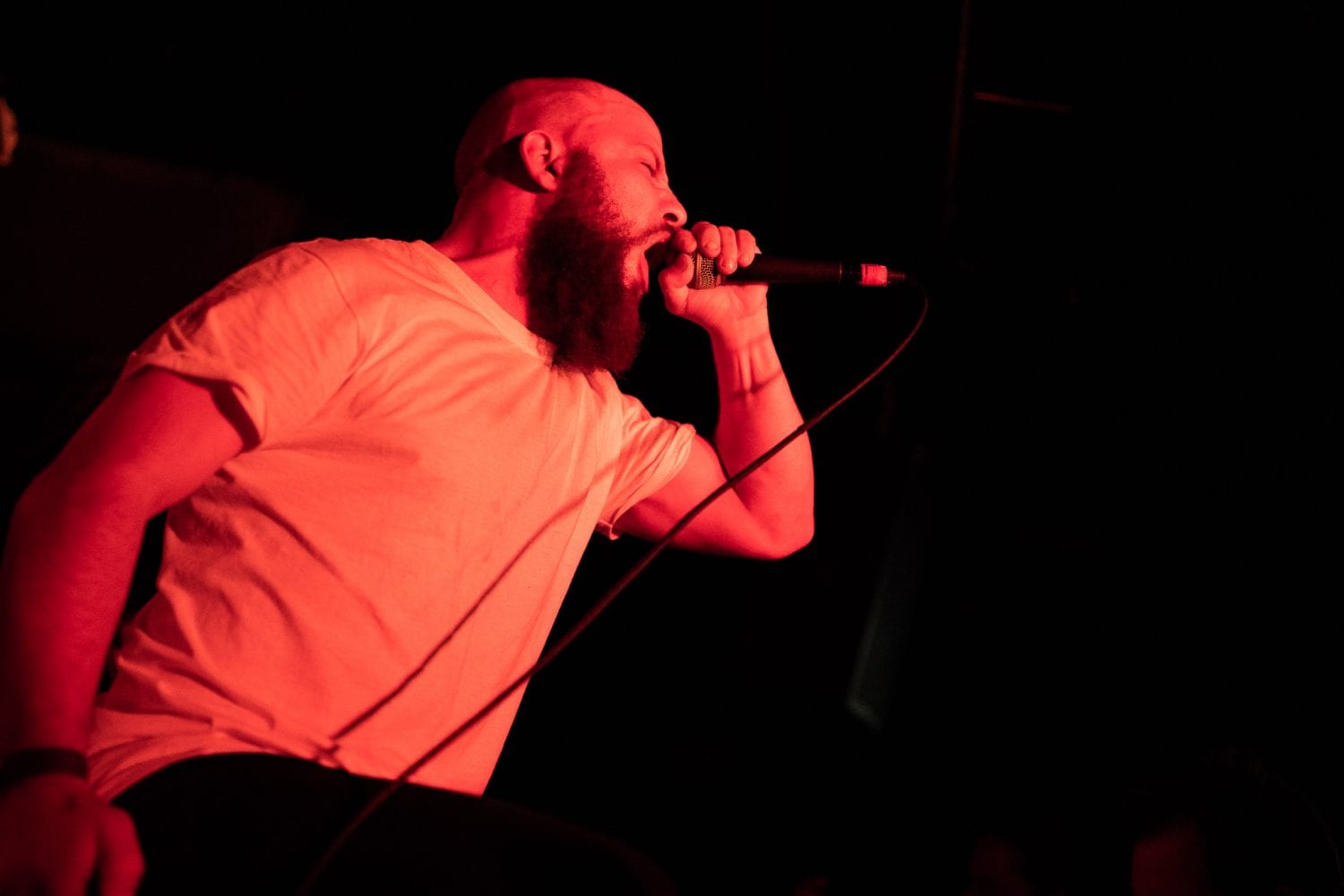 Playing in the support slot of the evening was Rivers Of Nihil. This is a band that has only crept up on me recently with their latest album, the amazing Where Owls Know My Name.  After soaking up that album multiple times, I delved into their back catalogue and was made an even bigger fan after seeing how talented and forward-thinking their approach to progressive death metal is.Starting off their set with ‘The Silent Life’ from the current album, the band set on a course to put the crowd into an even more frenzied state. ‘Monarchy’ and ‘Death Is Real’ followed, coming across with the energy and perfection found on record in this live setting.  ‘A Home’ continued the emphasis on the current album, with the band ending their set with ‘Soil And Seed’ from their The Conscious Seed of Light debut, giving the fans a great snapshot into their whole catalogue.  he crowd was fully giving back the energy the band was putting forth, with a big circle pit making the show go into rowdy territory. And with the band playing tight and commanding the spotlight with crowd engagement, I came away knowing that I wanted more down the road, and will welcome seeing this band again. 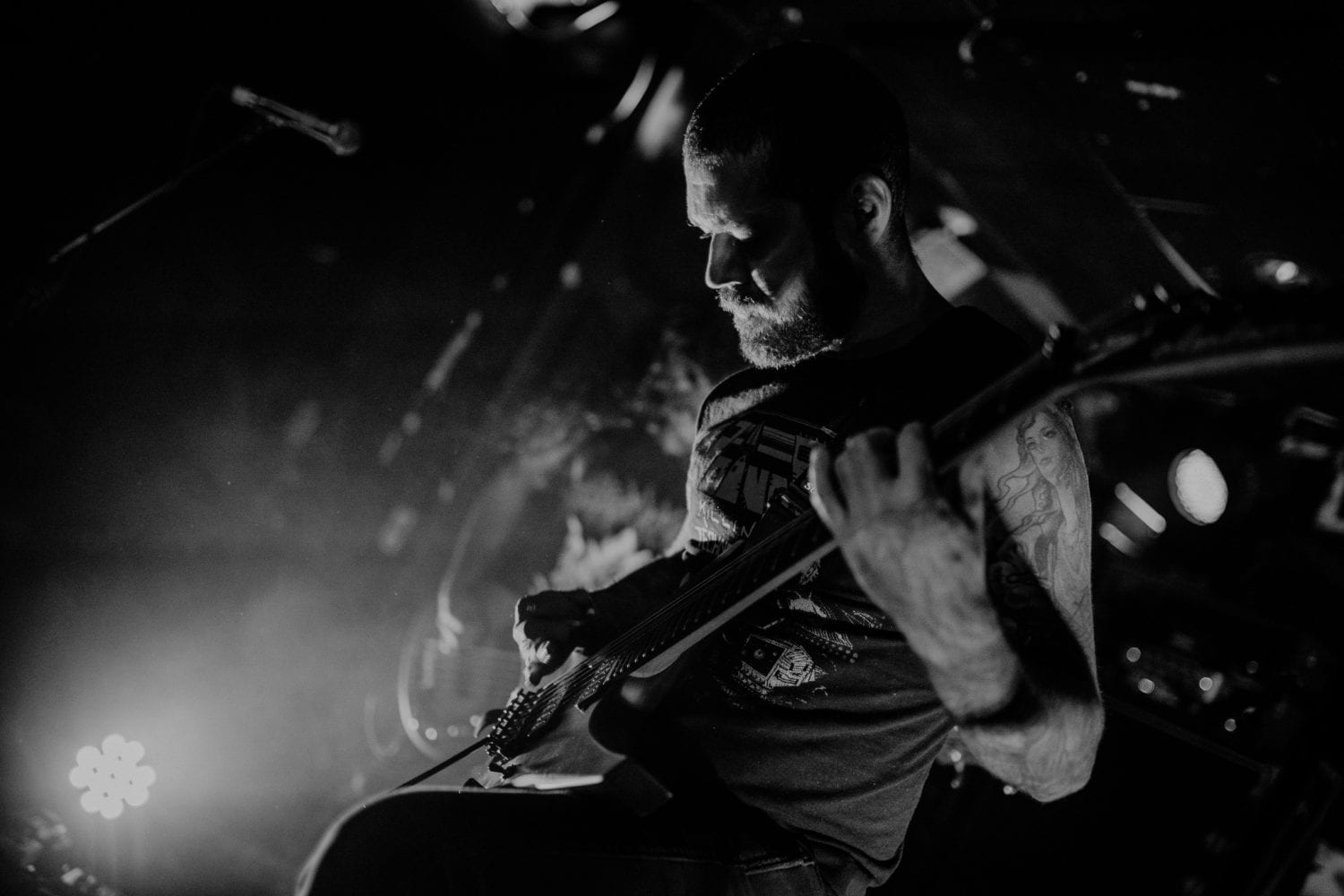 After an electric night so far, it was time for the headliner to approach the stage. Revocation have built their career up to the present day with a high emphasis on a technical prowess that is matched perfectly with an adrenaline-soaked delivery. And with the already passionate crowd giving their all for the bands on the bill so far, it was time to go ballistic for one more round. Coming out to the current album’s title track, ‘The Outer Ones’, the band went full-tilt and pushed the limits.  Following up on the present material with ‘Of Unworldly Origin’, the band pushed into ‘Madness Opus’, and with it’s mid-paced flow, it settled the crowd down a bit so as to not expel all their energy. ‘Blood Atonement’ ramped the crowd back up before going into my favourite tune of the evening – ‘Communion’ from their previous album Great Is Our Sin. I loved this album when it came out and I thought it didn’t get as much press as some of their other work, and was glad to see it represented on this night.

‘Chaos Of Forms’ and ‘Only The Spineless Survive’ started off the trifecta of final songs for the set, and the crowd was still eating up everything the band was dishing out, with ‘Witch Trials’ playing us out on this highly energetic and fun evening. I was impressed to see how frontman Dave Davidson kept his pace going all show, especially given how highly demanding his presence is in the band. That’s not to say that the rest of the band weren’t bringing everything they had either, but there’s just something very special to me about Davidson’s approach and drive when performing. 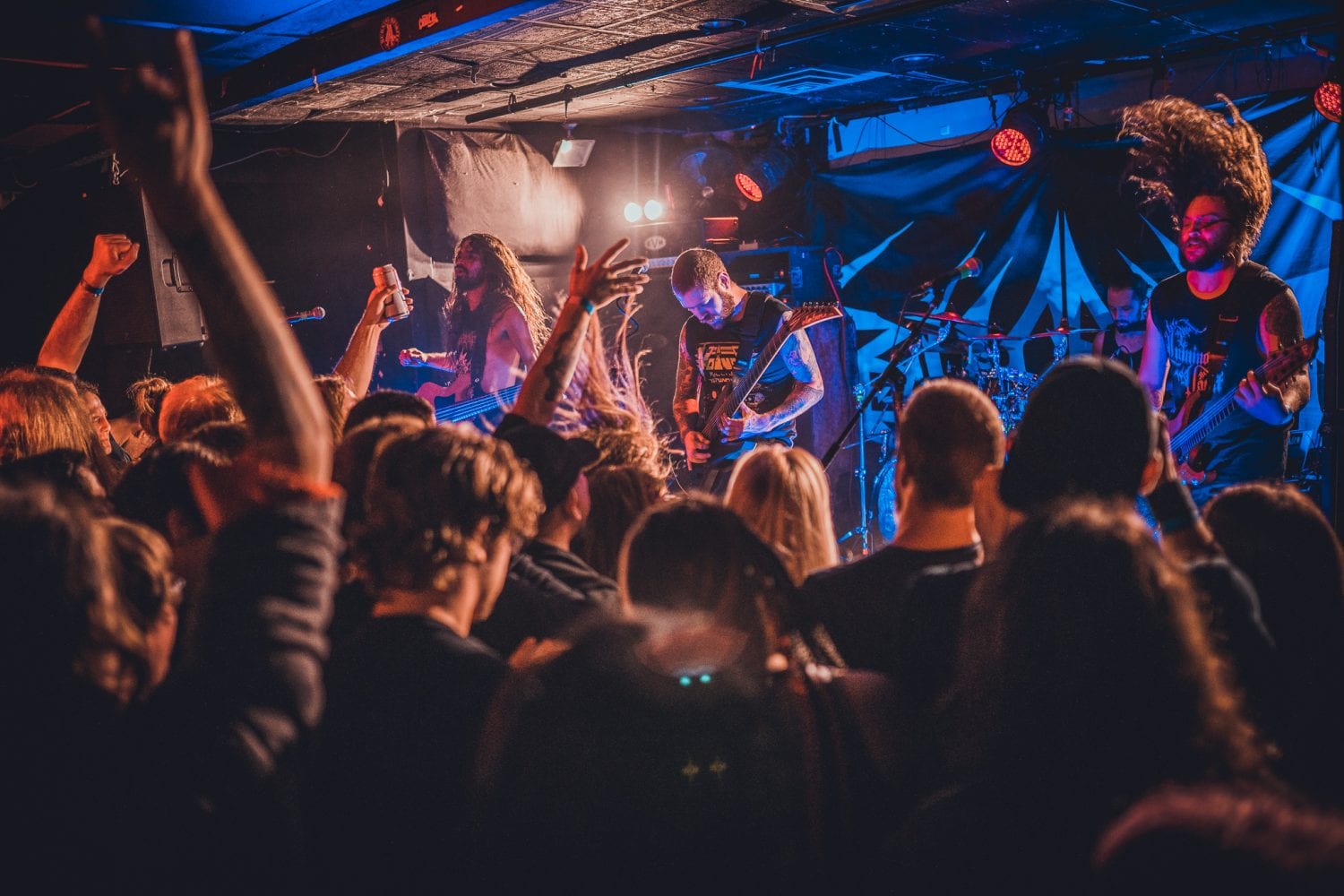 Final thoughts for me on the show were that for a Monday, the bands couldn’t have asked for a more rambunctious crowd and a more electric atmosphere. For all the negativity outsiders to Toronto can heap on our native music crowd compared to other cities, tonight certainly showed that the stereotype is flawed.