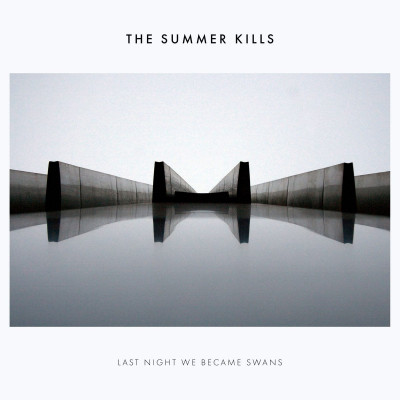 Last Night We Became Swans by The Summer Kills

Back on New Year’s Day 2011, Strummer/Cohen/Waits-informed balladeer Matthew Ryan and ambient post-rock soundscapers Hammock released a collaborative EP (total running time – a rather pleasing 20:11 minutes) and seemingly went about their own business after that, leaving this little moment of a shared intersection between the two musical worlds.  Fast forward to April 2018 and it would appear that, rather than just a brief coming-together, this joint-venture has been allowed to quietly grow and has finally borne fruit in the form of a new name, The Summer Kills, and an album in Last Night We Became Swans.

As with their previous EP, it’s a strange space being occupied.  If you selectively listen to the constituent parts, you can definitely hear Hammock being Hammock and Matthew Ryan being Matthew Ryan, but – like an aural equivalent those Magic Eye pictures which were all the rage in the early 1990s – if you relax your senses and find where the patterns cross, you’ll find a whole new record within.

It opens slowly and with purpose.  ‘Are You Awake?’ is as gentle as the title suggests; describing a moment of urgency that seems to be frightened of manifesting itself, a need to say something but also a need to preserve a fragile peace.  It’s an intimate song with Ryan’s whispered anguish which is given further emotional impact by having a slow, reverbed piano backing bolstered by Matt Slocum’s string arrangement which makes this close scene fill up all the space around it and beyond.  This all plays out at a glacial pace and gives way to a firework-like response in the opening chords to ‘Stop’ and an opening line of “We can’t undo all that we did”, a statement that is both tinged with regret and memorial celebration.

Last Night We Became Swans is an album which has a definite course and plots it with unerring precision.  It is slow and purposeful when it needs to be – ‘Like New Year’s Day’ makes a welcome and unaltered return, and ‘Summer Kills’ is almost 6 minutes (as are most tracks here) of slow-burning and beautiful heartache – and picks up the pace to euphoric effect when moods need to be either broken or emphasized.  ‘Collide’, ‘There is No Tomorrow’ and ‘Challenger vs. Stars’ appear like late-night additions to U2’s Hansa period, collisions between Eno-ist ambient construction and Berlin pop-rock excess which both stand out from and fit perfectly with the rest of the record’s expansive introspection.

If you look too deeply you’ll find that this all seems a bit of a contradiction running through the entire experience, but it’s this constant emotional and existential duality which makes everything work so well.  Ambience solely as ambience and force solely as force only work briefly before it all feels a bit samey and transitory.  The Summer Kills have something here which will grow, comfort and hurt for a long time to come.

Writing about this at the end of October when it came out in April looks like I’ve been lazy.  I mean, in general I am, but not in this instance.  I’ve waited a long time to find the proper place to put this and to find the best way to listen to it.  Like the time taken between EP and LP, it feels to me like it needed the time taken from release to now (I guess this is why the last track is entitled ‘November’) for it to make its motives and sense complete.  Things that felt closer, stronger and warmer in Summer now feel distant, fragile and colder.  But there is also more time and different stars in the sky to bring about contemplation instead of urgency, calm instead of passion and a whole different sort of beauty and joy to be found wherever you look.  This is all displayed perfectly within this record and it is proof positive that while there’s nothing wrong with brief flashes of whatever makes you feel anything, inertia will always win.