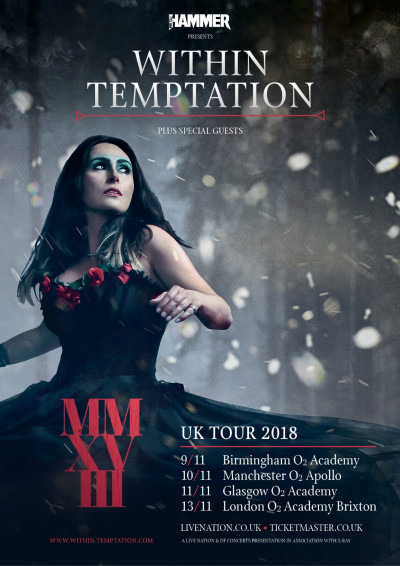 Within Temptation at O2 Academy Brixton

Coming after a short hiatus, following extensive touring off the back of their last album, Dutch symphonic metal act Within Temptation made a welcome return to the UK. Subverting the form somewhat, the band are touring in advance of their latest album Resist (originally due for release in December, but delayed until February 2019 due to production issues), with this particular show at London’s famous Brixton Academy being the biggest event of the UK leg of their European tour. Due to the length of the wait between this upcoming release and 2014’s Hydra, there has been a great deal of anticipation from fans in the build-up to Resist’s release, and this night proved to up the ante ever more in that respect.

Charged with whetting the appetite for the band themselves were Brazilian rockers Ego Kill Talent. In many respects, they are the ideal opening act. While there is nothing about them that is especially novel, they are enthusiastic and engaging from the moment they walk on stage. Frontman Jonathan Correa deserves credit in particular for striking the right balance between pumping up the energy in the room and not taking things too far, as if they were the headline act. The one big problem that they were never really able to overcome, however, was that they were simply the wrong band for this show and clearly fell completely flat with a large proportion of the crowd. Those who were not put off by the genre of music put on by Ego Kill Talent were clapping and moving along to the fast-paced guitar work accordingly, but this was not the case for most.

Indeed, it is safe to say that the set-up during the interval provided more excitement for many at the venue. The elaborate setting made the stage into something more resembling an alien spaceship than anything you would be likely to find in the south of London. When Within Temptation finally do take to the stage therefore, they are greeted with an almighty roar from the crowd, who then repeat the rise in volume when lead singer Sharon den Adel enters decked out all in white and brandishing a large flag, following a lengthy intro of the brand new song ‘Raise Your Banner’. It is clear, even before the first lyric is sung, that Within Temptation intend to put on a real spectacle. The effect, however, is somewhat dampened by the band’s brave, albeit not entirely effective, decision to open their set with three songs off of the as-of-yet unreleased Resist. As good as these songs undoubtedly sound, it gives the start of the show a slightly restrained feel. . .  at least from the audience’s perspective.

This does not last all that long, however, as we soon find ourselves treading more familiar ground with ‘In the Middle of the Night’ from 2011’s The Unforgiving. Den Adel said before this song that it was time for the audience to test their vocal chords, and having not known the words to the previous three songs, they are more than ready to rise to that challenge. This trend continues with the anthemic ‘Stand My Ground’ and the much more ballad-like ‘All I Need’ which are to follow. Thankfully, the crowd are never in danger of drowning out den Adel’s voice because tonight, to say that she was on form does not do her justice. Regardless of whether she’s singing the heavier tracks like ‘Faster’, or even when it is just her and keyboardist Martijn Spierenburg onstage for ‘Forgiven’, she is able to deliver every note exceptionally. Indeed, the whole band thrives off of going back and forth between heavier and softer tracks as they expertly build up atmosphere during the latter, and dash across the stage, making full use of the space available to them, during the former. Guitarists Ruud Jolie and Stefen Helleblad in particular do a fantastic job of keeping the energy up as they interact with each other, while den Adel and the crowd to bring a real sense of joy to proceedings.

The stage show that Within Temptation brought with them to Brixton, which has been fantastic throughout the evening, comes into its own even more towards the end of the set. Not only did the band make excellent use of the props onstage, but the giant screens across the backdrop added greatly to the visual spectacle; and this was particularly true with fan favourites ‘Paradise (What About Us)’ and ‘What Have You Done’ where the guest vocalists (Tarja Turunen and Mina Caputo respectively) were displayed in all their glory over the stage. It was the light show, however, which was the truly spectacular thing to behold, and nowhere was this more pronounced than in the final song of the regular set, ‘Mother Earth’. This brought all of the elements of Within Temptation’s set together, with maximum crowd involvement, a stunning light display and Den Adel at her operatic best.

There was one final treat for the crowd in the encore though. A costume change from Den Adel saw her return to the band in a flowing green dress, which again brings the visual and sonic experience together for their final song ‘Stairway to the Skies’. After a superb vocal rendition, she is hoisted into the air midway-through to sing the rest from up high. It is difficult to think of a more fitting end to what was overall a fantastic show. Although there was a slight dampening of enthusiasm with five new tracks in place of some that most would expect to be on the set-list, the band’s performance more than made up for it. Throughout the weeks before the show, Within Temptation had been raising some eyebrows across the metal scene with some high-profile billings on some of Europe’s festival listings. Any apprehension however that they may be punching above their weight in this regard can be firmly put to rest. Within Temptation belong on the big stage, and with some epic new tracks, well-rehearsed and waiting to be released, there is no doubt that more arena-style performances like this await us in future. 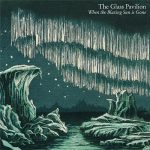 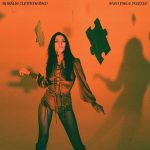