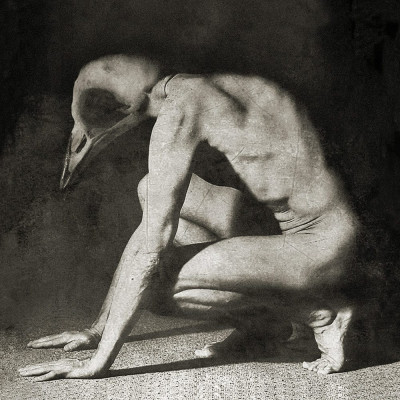 There’s something very unsettling about the world of Helium Horse Fly. The grotesque, twisted figure depicted on the album artwork sets the scene – this is a band that doesn’t belong, that doesn’t want the listener to ever feel safe. And, like that figure, the band is drenched in sorrow, the discordant guitar tones and mournful vocals coming across as moans of existential suffering.

Hollowed is the Belgium quartet’s second full length album. Formed in 2009, they released two EPs before releasing their debut self-titled record in 2013. Hollowed takes that ten years of experience and refines it, showing off the best of the band’s uniquely uneasy soundscapes. Their music is hard to define – veering from droning noise to ponderous progressive rhythms to more hardcore stylings. At times it’s just as hard to listen to; off-beat drumming, discordant guitars, repetitive loops that outstay their welcome, it feels like a hard album to recommend. It’s all held together by Marie Billy’s beautifully soulful vocals, a haunting performance drenched in melancholy. Hollowed feels like the best horror movies in album form – unsettling, uneasy and hard to get through, but nonetheless rewarding in the end.

The tracks themselves are an odd bunch. Opener ‘Happiness’ uses monotony as a weapon, its droning riffing never giving way throughout its six minute run time. ‘Algeny’ initially conjures up the feel of the back room of a Parisian bar; of early twentieth century blues before going in a more electronic direction. It remains beautiful and ethereal throughout and has to go down as an album highlight.

It’s followed by glitchy instrumental ‘Progeny’, which feels both completely different to the rest of the album yet still completely a part of the rest of Hollowed’s unsettling dream motif. If there’s a point where the album lags a bit it’s during the longer songs. ‘In a Deathless Spell’ is more relaxed, it’s a slow and ponderous track and that’s entirely the point, but it does feel a little bit too dragged out. ‘Monochrome’ on the other hand merely feels like more of the same – its dreamy and unsettling but by this point in the album that almost feels safe and the song fails to find its own voice. This is a shame as (excellent stripped back closer ‘Shelter’ aside) ‘Monochrome’ ends the album with a bit of a damp squib.

In part because of this it comes as a bit of a relief when the album does conclude. Normally this is a bad sign for any album, but in the case of Hollowed it feels more like a sense of pressure being lifted. Helium Horse Fly’s eerie intensity is draining, making this a hard listen, but one that is intensely rewarding. It’s a disturbing, unsettling album that won’t be for everyone, but those who make it will find the journey incredibly worthwhile.