(((O))) Review: Pilotcan – Bats Fly Out From Under The Bridge 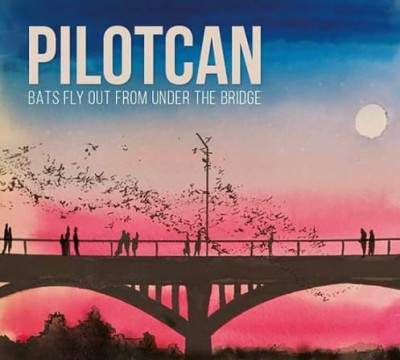 Bats Fly Out From Under The Bridge by Pilotcan

Edinburgh’s enduring Pilotcan are a blast from the past. It must be almost twenty years since I played a gig with them in Belfast. Head honcho Keiron Mellotte is the brother of Tanya, an ex-member of John Peel favourites Tunic, and her new band Go Commando were also on the bill. I always remembered their name as they were lovely friendly chaps who had a great way with melody. As soon as I saw their name again I knew I had to grab the opportunity to catch up on what they were doing even though I couldn’t actually tell you much more about them. I’m glad I did as their first album in 14 years, Bats Fly Out From Under The Bridge is superb.

Formed in the late 90s, the band fluked an opportunity to support Jon Spencer’s Boss Hog despite not having any songs or much ability with their instruments. Subsequently to that nightmare the band progressed somehow to releasing singles on Stuart Braithwaite’s fledgling Rock Action label. This step up in activities led them to recording a Peel Session and releasing a further three albums. However, there was friction between band members and eventually the band dissipated and Keiron went on to become a DJ amongst other things. This album was written almost entirely in Austin, Texas but recorded in Scotland at Chem 19 Studios, with producer Paul Savage. There’s even a follow-up album already recorded, due out this year and a compilation of early singles and Peel Sessions so it looks like Pilotcan are going to be with us for a while this time.

Bravely opening the album with an instrumental, the gorgeous ‘Page Take Me To The Lair’ features warm guitars (courtesy of Joe Quimby and Pete Dunlop) fluidly mixed with soothing strings while Tom Reid’s drums build an undertow of brooding intensity. The sprightly pianos that leap about conjure up images of highlands and silk wrapped maidens performing a beautiful dance. (I’ve just started watching the Outlander show on TV, can’t you tell?). It’s a marvellous opener and something that Mogwai would be very proud of. I’m a sucker for slide/pedal steel guitars so ‘From a Days Inn, Virginia’ instantly appeals. When the swooping lead guitar line appears in the chorus it sends the neck hairs into a frenzy. The rolling pianos that permeate through the instrumentation really embellish the sound and you begin to wonder why Pilotcan aren’t playing arenas.

Lead track ‘Daylight Savings Time’ swaggers with a monolithic beat and muscular taut guitars allowing Keiron to interject with a care-less vocal delivery that fits perfectly. Those magnificent raging guitars remind me very much of another Scottish band who could/should have been stars, AC Acoustics. They had a brilliant knack of combining superb guitar work with clever (less than obvious) melodies and Pilotcan know how to do this expertly too. Driven along by a hefty drums and Paul Jarvie’s surging bass ‘(The) Schneck’ is sure to ensure moshpit mayhem as it is such a joyous and uplifting song. I’m more than happy that it recalls the heady days of indie/grunge crossover that you couldn’t escape back in the 90s.

‘Slack and Candy’ is a downtempo ballad resplendent with chiming piano and Caroline Gardiner’s sombre cello that smoothly winds its way around Keiron’s tragic vocals. There aren’t enough tracks with guitar harmonics in them so kudos for doing that. The song erupts eventually into a melee of sweeping guitars and pounding drums that very much recall Afghan Whigs in all their glory. Next up is ‘3rd and Bannister’, a powerful punk pop charger with scorching guitars that mixes Keiron’s snappy vocals with some lovely tones from Celeste Carballo.

Instrumental interlude ‘Joey’s On Pills’ begins with more of that swoonsome pedal steel ushers and it’s utterly heart breaking. The primal drums are swapped out for intricate electro beats and experimental warped noises flash and mystify, while samples of a random American girl blethering ends the track with more questions than answers. There’s no doubt Pilotcan have mastered the art of combining guitars drums and strings and the elegiac ‘Glasshouse Girls’ showcases this to great effect, again echoing Afghan Whigs. The bizarrely named ‘Grackles (Bring Back Sriracha)’ wears it’s My Bloody Valentine influence like a spray tan. Those familiar warped to fuck guitars heave and flow allowing Keiron and Celeste to lovingly replicate Kevin and Belinda.
Beautiful cello, sweet guitars and gorgeous piano lead the instrumental ‘Heidi and Oscar’ to a heavenly place where they are met with warm brass to create a stunning crescendo. Pilotcan appear almost as two bands in one with their ability to create sublime instrumentals as well as writing perfect indie rock songs that swing like wrecking balls. The mainly acoustic album closer ‘…..Everlasting Happyness’ diverts attention away from the epic excess of the previous track to once again showcase the band’s ability with instruments and arrangements. The uplifting cellos that swell give the listener a little hope and the shimmering tones that ebb into the mix are wondrous and ghostly.

It’s a dramatic and beautiful end to an album that truly astounded me. Only for the fact that it came to my attention after the end of year list had been decided this would seriously have been nestling somewhere in my Top 10. That good. (I must point out that the album is currently only available via digital outlets with a physical release to follow). It’s a thrilling prospect that we don’t have to wait so bloody long for the next album from one of Scotland’s best kept secrets. 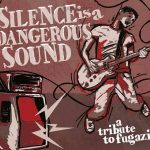