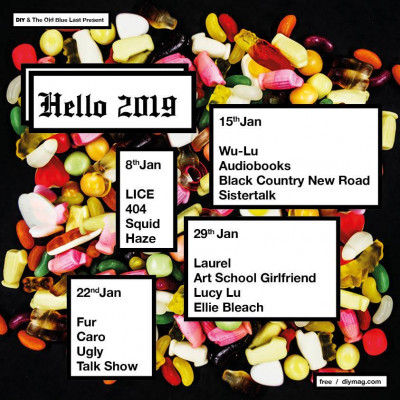 The room above the Old Blue Last is packed. Shoreditch’s hipster reputation is proving itself well-deserved: a series of bands of varying degrees of underground are playing tonight, and the Old Street pub’s live space is impressively full. This is the second of a series of shows curated by DIY magazine, and it’s intriguing to see their prediction of 2019’s musical cutting edge.

Sistertalk open proceedings, a be-suited seven-piece with so many guitarists that they barely fit onto the tiny stage. “Can we turn the lights down”, says their lead singer, which hushes the raucous crowd; they proceed to strut their way through two songs which sound like the Arctic Monkeys attempting a Bond theme, all while bathed in deep crimson. “Can we have some more light please,” the lead singer asks, hilariously, “that last request was a mistake”. The vampiric red lifts to a much lighter violet, which breaks some of the mystique, but Sistertalk come across well. Their many guitarists, keyboard and sax jam furiously, but it’s their lead singer who attracts the most attention, gazing dryly across the crowd and pouting between lyrics like a more restrained Derek Zoolander.

They’re yet another early-00s-sounding indie band, of course; at first, Black Country, New Road look not dissimilar as they come onstage, though the lead saxophonist’s electric red-and-white jacket, accented with Japanese text, is a clue to the contrary. They’re made to stand awkwardly for a little while, plainly ready to start but held up by a pesky screeching mic. What follows is a strange and unexpected trip; “I open the lid of my Macbook Pro”, the lead vocalist begins, intoning a spoken-word vignette of Facebook-stalking over a sinister instrumental. A slow start metamorphoses into the most nakedly off-kilter set of the night, the band’s sound cacophonous and freaky – that saxophonist screeches, parps and judders as if his instrument’s having a stroke – while framing lyrics that channel a twisted internet-age quirkiness. “I am invincible in these sunglasses!” bellows their singer, who snarls, rasps and shouts rather than sings; “How dare you bring Kanye into this!”. It doesn’t scream “take me seriously“, but is also enjoyably kooky and startling. Thus far, then, it’s an impressive night.

By this end of the bill, we reach the artists actually available on Spotify. Audiobooks are third to take the stage, and judging by the reaction of the audience, this is the band most people are here to see; the crowd actually cheers with excitement at the start of several songs, including ‘Hot Salt’ and ‘Friends in the Bubble Bath’. At just two members, Evangeline Ling on lead vocal duty while producer Wrench grooves away behind his keyboard, Audiobooks are a much sparser setup than tonight’s other bands, and fill the room not with guitar riffs but heady dance beats and synths. It’s brilliant, though; the pair’s material is every bit as wiggy as the previous band’s, Ling delivering surreal lyrics with barks, screeches and yowls, but also makes for irresistible electropop. On a particularly frenetic ‘Dealing With Hoarders’, Wrench sets a thumping beat going, gets up and sets into a gnashing guitar rhythm, while Ling takes the chance to occupy his vacant console, bash random keys on the keyboard and roar into two mics at once. They make no room for between-song chat, but she exudes personality, and clearly loves being onstage; she fills the room with infectious mania, before demurring, chirpily, “thank you very much”.

The crowd thins a little after that, though it remains impressive for a Tuesday night in London. More fool those who’ve left; South London multi-instrumentalist and producer Wu-Lu, aka Miles Romans-Hopcroft, looks the coolest person to take the stage yet as he fist-bumps his keyboardist, even before he revs up his killer set. Crammed beside him into the box is the most diverse band set-up of the night, with backing vocals as well as keyboard, drums and two more guitars. The result is a swirling concoction of cosmic rock, airy and spacious but full of energy, and inflected with jazz and hip-hop tinged vocals. Where tracks like ‘Habesha’ and ‘Sailor’ have a mellow, gliding quality to their recorded versions, tonight they ring with force, Romans-Hopcroft shaking his head back and forth as he riffs like a man possessed. It’s another short set, but he makes room for between-song chat; there are a few whoops when he tells the audience how happy he is to be performing tonight, and that much of the material here is entirely new. The final song, ‘Brave’, is the debuting track that makes the most impact, Romans-Hopcroft describing it as an ode to single mothers; “Braaaaave wo-man”, goes its chanted refrain. What it lacks in the startling madness of the previous hour’s acts, it makes up for with breezy, effortless cool, and it’s disappointing when it ends. Tonight’s curators, then, have good taste.