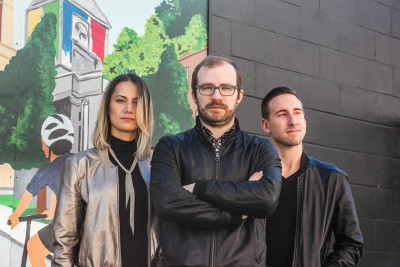 Leave Out All The Rest by Major Moment

Boston-based trio Major Moment is, in a way, a musical startup, so to say. They are relatively new to the music scene with an EP under their belt, another coming up in the Spring of 2019 and then this stand-alone video single.

Now, on one hand, video single projects are nothing uncommon these, days, actually, they seem to be the white-hot media, some studies claiming that they are overtaking everything else. Possibly, but that is not the key here.

Of, course, most of the music fans would be familiar with the Linkin Park original, but that in itself is not the big news. What is, is the fact that the trio, comprised of two Russian singers/instrumentalists (Andrey Borzykin and Sasha Razumova) and an American drummer have teamed up with “320 Changes Direction” foundation headed by late Chester Bennington’s wife and “Relix” magazine to raise the awareness about mental health and suicide problems. Actually, all the proceeds from the single will be to the benefit of the Foundation.

Whether you are a Linkin Park fan or not, Major Moment do the song justice. They stick to their melodic prog tendencies exhibited on their first EP, and you can hear the influences of the likes of say Muse and Linkin Park itself. The band takes a more relaxed, melancholic approach to the song, something the tribute of this kind deserves.

Still, the main points here are that Major Moment show signs of promise and that battle with mental illness and addiction deserves as much support as it can get.