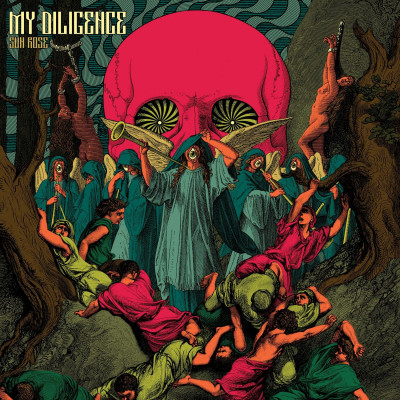 Sun Rose by My Diligence

It may seem to be a bit of a trend these days; proggy stoner sludge. Yes I know, for those outside the bubble of this fusion of styles, this may sound odd. However, since the early start of this century, this hybrid has become quite a popular avenue to delve into within the metal and heavy music culture.

While many bands flourish with this direction (and some flounder), it’s interesting to find how the newer bands make inroads and stand out. And while Belgium’s My Diligence have been pushing forward since the early part of this decade, it’s interesting to note that on their second full-length album entitled Sun Rose, the trio show a maturity and drive that begs attention.

There is something to note before I give you a synopsis of this album, which may surprise some. What I found interesting in my research was that upon the band losing their bassist on their previous release, they decided to go forward as a trio with two guitars and drums. I find this to be odd, and I’m usually very dismissive of an approach of no bass in a band, but this seems to work somehow. Yet I do feel in some respects that I can hear bass in the underlying groove of their music, but maybe I’m just hearing things and the bass, drums and guitars are melting together to give an expert illusion.

So, with that knowledge given, we proceed and start off with ‘Resentful’. A distorted guitar duo start and drums enter. The song lurches forward and the vocals (provided by guitarist John Sailor) take a laid-back and simplistic approach, almost mixed a little in the background in some respects, which gives the instruments their place to shine and give off the mood of the slow and methodical approach to the song. I have a feeling that this minimalistic direction will help to slowly build the rest of the album.

As I predicted, ‘Hunt The Hunter’ quickens the pace a tad and becomes even more weighty and bottom-heavy, with the vocals soaring just a tad higher than before. ‘Backstabber’ then follows with atmospheric vocals that keep the mid-paced drive on the straight and narrow. The atmospheric qualities lend well to the instrumentation and give it a nice flow. This song takes a few listens to truly appreciate, but once it clicks, it’s great to sit back and drink a beer to. This is definitely my favourite jam on this record. After ramping up their sound so far, ‘An Asteroidal Arrow’ dials it back a bit and goes for a slower pace, with a kind of marching push to the instruments.

It’s like night and day now as the band go into a fast-paced and vibrant upbeat jammer in ‘Flying Poney’, which reminds me of Mastodon’s more bright material in places. ‘Lecter’s Song’ offers up a nice blend of slightly erratic and laid-back, and the process of going back and forth shows how well the band can pull off both styles of playing. This may very well be the best song to preview for someone who hasn’t heard the band before.

The up and down nature of the track list continues on with ‘So Pretty So Cruel’ staying upbeat with a big bottom end, and ‘Serpentine’ taking the pace down just a shade. ‘Unreal’ finishes off the album with the mentioned pattern momentum on the upswing, with a fast and punchy number that leaves this collection of tunes of a high-note.

The band’s bio cites influences such as Helmet and Elder, which I can’t disagree with. In a lot of ways they seem to meld those two influences quite well. However the band mimics the former, with every song staying around the five minute range, so even with such weighty material, it’s totally digestible. Another thing to point out is that the vocals are interesting in the fact that in most sludge-based metal bands, it’s almost always with a harsh direction. There’s clean singing all the way on this album, which is a nice change of pace from the standard.

I do notice that although the actual music is very vibrant and well done, it can become a tad lumbering in places. This might just be my opinion, but if they just tightened up that area of their sound, I would welcome it. Having said that, I do appreciate that the band can seamlessly shift between long and atmospheric passages, and then can give you a high from the energy put forth in the spacey and bright moments. This quality can get lost on some bands who stick to one path, but this group shows how multi-dimensional they are with putting forth their songwriting.

A solid effort and I look forward to seeing how these three lads continue to build and structure their musical output.