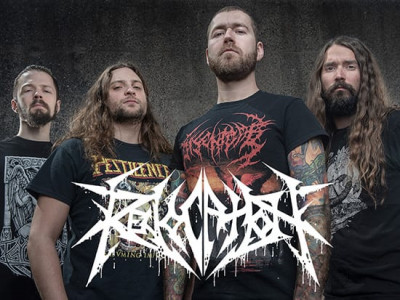 We never want to sound like a clone of any other band, rather we try to create a synthesis of all our influences so that we can produce songs that sound cohesive. At the end of the day we strive to have our own voice in the scene. We want to be unique first and foremost.

Revocation’s Dave Davidson is known the world over as one of the premier guitarists in metal, with a distinction that few have of being an accomplished guitarist in other styles. His constant evolvement as a musician has garnered the band continued praise through their catalogue of nine releases (including two EP’s) since the band’s inception. With their latest offering in the form of 2018’s The Outer Ones, the group continues to push forward to exciting new highs, and puts forth a punishing attitude in their metal hybrid style of prog, thrash, speed and death, all while offering up a technicality that is hard to match.

Davidson took some time to talk shop after wrapping up a successful tour before the end of 2018, and before hitting the road again in April for the stacked Chaos & Carnage package tour in the U.S.

(((o))): Big congrats on the numbers to come out of your first week of the new album being available. Cracking the Billboard Top 100 is a big deal!  Do accolades like these mean a lot to you, or is it just flattering and you keep plugging away?

Dave: It’s all very flattering but we prefer to keep forging ahead. You can’t dwell too much on the accolades, especially because they’re fleeting when it comes to billboard chart numbers. We’re focused on the album cycle as a whole rather than on only the first week sales. That all being said we greatly appreciate all the support we’ve gotten, cracking the Billboard Top 100 was a cool milestone for us.

(((o))): When songwriting begins for a new album, do you generally have an idea of the particular musical avenues you want to explore, like a blueprint?  Or do you just go with whatever is motivating you musically at the moment?

Dave: It’s more the latter. I spend a lot of time working on music when I’m home from tour so all of the things that I’m focusing on naturally start to seep into my playing and into the songwriting process.

(((o))): You attended Berklee and focused your studies on jazz. While you have lots of jazz influence all over the Revocation catalogue, do you feel like a possible solo project would be a good outlet to fully delve into your non-metal musical interests?

Dave: Yeah I studied with a lot of amazing jazz musicians at Berklee and I still continue to work on developing my vocabulary in that genre. I recently took a couple of lessons with Adam Rogers who’s an amazing jazz guitarist and those were very informative. I’ve actually got another band that has an album mostly written. We’re just in the stages now of shopping it around so hopefully it’ll get recorded in the next year or so. I’m really excited for that project; it’ll definitely show a different side to my playing and writing style.

(((o))): I have heard some people suggesting that The Outer Ones is the most death metal the band has sounded, and it has a overall darker feel compared to previous albums. Do you agree with this statement?

Dave: Yes, I think it’s our most death metal release on all fronts.

(((o))): It feels to me like the new album, while still technical as hell, has slowed down and breathed a bit more than previous releases. Do you agree?

Dave: Yeah there’s a lot of tempo variations on this album. When I was younger I was full of energy I guess and was writing thrash song after thrash song. Now that I’ve gotten some of that youthful exuberance out of my system, I’ve really enjoyed writing songs at mid-paced or slower tempos, at least for metal. To me writing at slower tempos does allow the songs to breathe in a different way and allows for more epic sounding sections to develop. There’s still a healthy amount of high-velocity sections on the new album however; the first single we released is a total ripper.

(((o))): Like myself, I’m a big fan of technical death metal and progressive metal, especially from the 90’s. While I routinely praise the likes of Pestilence and Watchtower to anyone that will listen, what would you consider one of the more underrated acts from the era?

Dave: I think Atheist and Gorguts are underrated for sure. They had a big influence on me when I was younger and we had the pleasure of touring with both of those bands which was really cool. There’s also bands like Nocturnus or Toxik that were very progressive for the time that not as many people are familiar with today.

(((o))): Keeping with the old-school theme, how often do your heroes come creeping in to your songwriting?

Dave: It’s hard to pinpoint exactly when the influences creep in. I think that’s the cool part about writing, once you’ve internalized that music it becomes part of your language so the influences come out in a natural way rather than something that sounds forced. We never want to sound like a clone of any other band, rather we try to create a synthesis of all our influences so that we can produce songs that sound cohesive. At the end of the day we strive to have our own voice in the scene. We want to be unique first and foremost.

(((o))): Since the band started, you’ve been in a pattern of putting out releases and touring, then songwriting and repeat. Do you feel like this is the best way for you to operate as a band?

Dave: Yeah, we’ve been lucky that there’s always been an abundance of material that we’re passionate about. It’s allowed us to fulfil contracts for two different record labels and tour all around the world. We’ll probably take a little more time writing the next one because I think it would actually do us good to slow down a little bit *laughs*.

(((o))): For the longest time, I’ve been in the mindset that if something sounds good, I’ll listen. Do you end up having people not understand the non-metal influence in your musical makeup? Or do you see more of a tolerance these days with how music and musical ideas have evolved?

Dave: Non-metalheads just can’t get past the vocals a lot of the time. They can’t seem to appreciate the music if there’s screaming happening over the top of it which I can understand on some levels. However, I do think that people are more open minded now, so I’m seeing more folks check us out. I’ve had musician friends from different genres really get into our stuff because there’s of course a technical element to the music, and I think that has the ability to draw people in.

(((o))): With how intricate the songwriting can be when writing an album, do you tend to over think certain passages and re-write? Or do you just reach a point where you think you don’t want to overanalyze?

Dave: I used to go with the flow a bit more when I was younger because everything was so new and fresh for me. Now with seven full-length albums under our belts I obsess a bit more because aesthetically, my tastes have changed and I also don’t want to repeat myself. The new album had the most amount of revisions that we’ve ever had. It was a lot of work but I think the final product speaks for itself so in my opinion it paid off.

(((o))): I noticed that you’ve been doing online guitar lessons. How rewarding is that, and could you see yourself doing this for a long time going forward?

Dave: It’s super rewarding, I love to teach for so many different reasons. I definitely enjoy helping students make breakthroughs with their playing. I’ve had a lot of students that came to me as beginners and now they’re able to play some really advanced stuff so that’s very cool to see. Teaching also helps me stay sharp and focused because you have to be able to think about certain concepts from multiple angles depending on the student you’re teaching.

(((o))): With a great back catalogue of songs to choose from, what can fans expect for a set list on the upcoming tour?

Dave: We’ll be playing a bunch of songs off the new record since we’re all collectively so hyped on them, and it’s also nice to just play fresh material on the road. We’ll also be playing a bunch of older classics, and some deep cuts as well, so there will be something for everyone in our set list.

(((o))): I’ve noticed through following your Instagram profile for the last couple of years that you’re a big beer fan.  Do you try different beers in the areas you tour? Or are you all about keeping to a regular rotation?

Dave: I love to try new beers as well as hit up my favourite breweries while I’m on tour. In certain cities I’ll visit the same breweries, mainly because I’ve developed friendships with different folks. Three Floyds, Surly and Off Color are always really good to us, and are great people as well, so we try to make it out to their spots when we’re in town. Not to mention they have amazing beer so that’s a plus *laughs*. I also enjoy the Hofbrauhaus in Munich because there’s so much history there. I pretty much dig all styles of beer, it just depends on my mood.