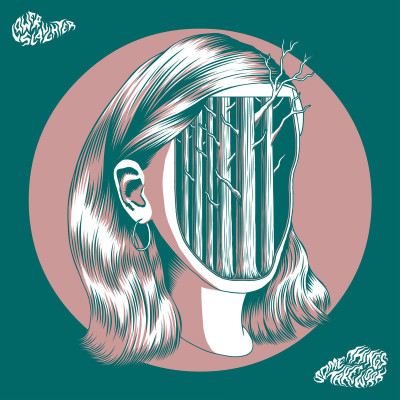 Lower Slaughter return with an impressive blast of their uniquely charged noise rock. Some Things Take Work‘s coolly stylish sleeve art (by Moonshake Design) is really tempting me to make a weak joke about faceless hardcore bollocks here but honestly nothing could be further from the truth. One of the more individual young bands with their hands in the same record bag, this album sees them grow more confidently into their own skin, kicking any thoughts of second album jitters to the kerb and stomping on their head. That they’ve managed this even though their vocalist Sinead Young decided to leave Brighton and move back home to Glasgow is all the more remarkable.

Making the band work as a long distance concern involved a change in song-writing methods. A more considered approach resulting in greater clarity and intensity. Furious opener ‘Gas’ sees a dose more Sabbath in the mix as Sinead rails against the controlling moves of a gaslighting partner, “Trying to please you makes me hate myself”. It’s a great start and establishes the general tone of the album, Sinead’s lyrical confrontations with relationship and mental health issues carried by tough but supple punk rock. Guitarist Jon Wood brings a wide palette of sounds and approaches. The pinballing guitar of ‘Into The Woods’ swaying verses drops into heavier sections before running into the menacing churn of ‘Revenant’. Its thick, sludgier sound contrasted again with the bright opening riff of ‘Hindsight’, a blast of on-your-toes-toppling-forward punk, that slows to a spacious swing before ending on a lovely circling guitar line that suggests regret or, well, hindsight. Stretching even further out ‘A Portrait Of The Father’ opens with a widescreen riff that’s almost Americana, and the tune rolls and rumbles.

“We argue endlessly but you won’t listen” they trailed the album with ‘The Measure Of A Man’ a wonderfully ill tempered argument of a song but there’s more on offer here than animosity and very little by way of self pity. On the magnificent ‘Some Things Take Work’ Sinead confronts her mental health struggles backed by a nice sharp riff, “I can’t take it, everything in my head hurts”. It’s a delightfully clear eyed look at the deadening mental gridlock of fighting yourself to try and get better. The breakdown takes us to a question both tiresome and familiar to anyone that’s ever struggled to cope “have you tried just not thinking about it?” As a dialogue plays out the other voice works both as a thoughtless family member or friend but also as an inner voice, because we all know that one’s worse. Her response is an exhilaratingly defiant scream of self possession and an acknowledgement that it’s a slow and unsteady process. All this borne upwards on the kind of thrilling, fist-pumping punk rock that makes you feel, however briefly, that you will rise and overcome.

Sinead’s vocals are really impressive across the album but final track ‘The Body’, another standout, has a vocal breakdown that allows her to sing out in a beautiful clear voice “Let me show you my love, let me express my devotion”. Because it’s not all just shouting and pain here in the world of heavy music, at least not in Lower Slaughter. Some Things Take Work is a cracking album, a step on from their first that finds them producing a taut and focused new set of songs. It’s angry, it’s fighty but it is most definitely righteous and hopeful.