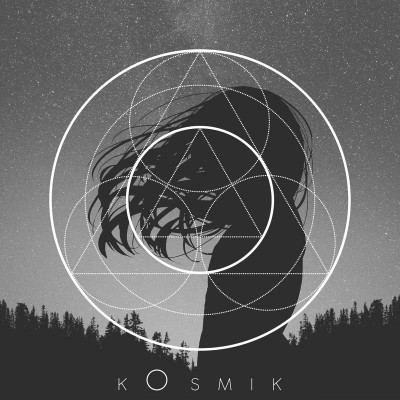 Of all the independent artists of the Bandcamp generation, Emin Guliyev is one of the most prolific of recent years. His vessel of creative output, Violet Cold, has put out some of the most important, breathtaking and uplifting releases under the post-metal banner, with many veering off into various sub-genre directions. Post-rock, trance, ambient, blackgaze and just straight-up noise only play a small part in Violet Cold’s broad view on music. It is worldly… or in some cases otherworldly, covering many bases and transporting the listener on a thoughtful and highly cathartic journey.

His latest opus Sommermorgen arrived back in May 2018 in a breath of fresh air. The trilogy, all released on one glorious day, consisted of Innocence, Joy and Nostalgia, each bringing their own flavour of expression to the mix. Now with this new six-track album, kOsmik, Emin sets his eyes on the stars for a transcendent 2019.

‘Contact’ sets the scene with its serene beat and vibrant pulse, which almost seems like an afterthought to Sommermorgen as it would fit neatly into any of those releases. ‘Black Sun’ hits hard from the go with heavy percussion, buzzing guitars and warped bass plucks. Marching beats and ethnic chants open way to a joyous unleashing of blackened blast beats and a swarm of high wailing guitars. Emin’s vocals make a welcome return, not heard since the impeccable Anomie, carrying a harsh tirade of throaty vitriol throughout the albums most ‘black metal’ song.

‘Mamihlapinatapai’ draws beauty from the black and pounces into form with punchy drums and blackgazing riffs. The post-black flag flies high as do soaring tremolos flowing through weighty barrages of blast sections all punctuated with gorgeous ambience and nuanced moments of bliss. The albums most interesting and thoroughly captivating song is the painful desolation of ‘Space Funeral’. Enrobed in melancholy, its pure isolation and boundless sorrow will bleed your soul and wet your eyes. Though it is a slow crawl through the stardust Emin’s use of lamenting growls and emotive riffs lifts this mournful melody into another stratosphere. Every anguishing note draws more emotion to finally spill out into an uplifting smile that beams ear to ear, making this one truly special, truly significant addition to Violet Cold’s extensive collection.

Title track ‘kOsmik’ launches the album towards its zenith, being as immense in structure and sheer unbounded wonder as its name suggests. Muscular drums boom through a cosmos of thick atmospherical riffage tuned to the high notes of post-black perfection. The transition into the mid-point is pure euphoria leading into a rapturous finality replete with echoes of spacey tones and a poppy female vocal section.

When I interviewed Emin last year he said that he had “enough ideas to make releases during the next 10 years” and hearing the creative depth of each of Sommermorgen‘s 27 tracks and the boundless magic of kOsmik, I truly believe him. His unyielding passion and commitment to music is awe-inspiring and his many feats of songwriting and production prowess deserve to garner an entire universe of praise. It would be interesting to catch up with Emin to see how his life and career have progressed since we last spoke.

Listening to a Violet Cold album is like being bathed in all colours of the spectrum at once. Its many layers build a story with a sincere heartbeat at its core, and that’s down to Emin’s affinity for structure and sound. Being so adept at many genres Emin has an infinity of potential before him, and with that, an infinity of emotions and thoughts to convey. The ethereal and the unknown are all points of inspiration and voids of endless possibilities awaiting fulfilment, so what wonderful dimensions of sound await us will remain, for now, in Emin’s vivid imagination. What is known is that 2019 has welcomed an album of the year contender in the majestic beauty of Violet Cold’s kOsmik.