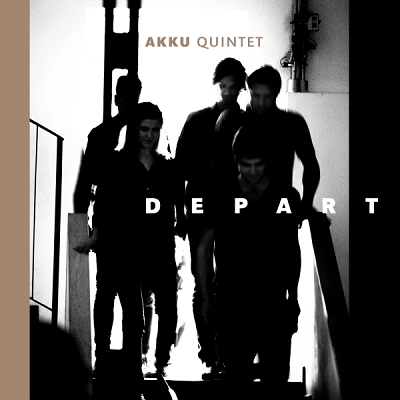 Swiss minimal jazz ensemble Akku Quintet was founded by Sonar drummer Manuel Pasquinelli nine years ago. They have so far released three studio albums from 2013 to 2017. Their music described by Sid Smith in his liner notes he wrote for their third studio album, Aeon, “An almost cinematic dimension that encompasses bittersweet moods and moments of unfolding drama.” And for me, being introduced into the opening of world of Akku Quintet’s music for the first time, I knew that this was another challenge since listening to Marilyn Mazur’s Shamania.

This year, Akku Quintet have released their fourth studio album and on a new label with Trey Gunn’s, 7D Media. Their fourth album is called Depart. According to Manuel, this album is the spiritual feeling that has this driving and expressive atmosphere.

It is mysterious, doubtful, moody, and unexpected. The quintet has done it’s performing with scintillating vibes that are on Depart. The album was recorded last year in April for four days. I can imagine it must have been one of the most intensive yet exciting rehearsals they did for their fourth album. Frank Zappa once said, “Music is the only religion that deliver the goods.” And with a few of the centerpieces that are on Depart, Manuel has delivered those goods.

The line-up considers alongside percussionist and drummer Manuel himself are; Andi Schellmann of Schnellertollermeir and Kaama on Bass Guitar, Markus Ischer on Guitar, Michael Gilsenan on Saxophone, and Maja Nydegger on Keyboards. Listening to Depart is like walking on a sharp razor blade that Akku Quintet have brought to the table.

‘Largo’ starts off with Maja doing some sort of nod to Traffic’s opening riff to ‘The Low Spark of High-Heeled Boys’ on a loop before the sounds of Ischer’s guitar goes sliding up and down while Gilsenan and Pasquinelli sets the tempo up and running. It then goes into this smoky atmosphere with a film-noir twist as if the detectives are still looking for new clues that the fugitive has left them.

Andi and Maja create this thumping attitude that can give you goosebumps as if someone’s creeping up behind you as Gilsenan’s sax goes into this circling structure. He takes the aftermath to a whole new level with some droning effects that crawl up behind you while he continues to set up this mournful scenario as the members change into this uplifting tone throughout the styles of Mike Oldfield.

‘Made in China’ features this sound of a toy piano spiraling up towards the staircase with some mysterious rhythm as Markus and Manuel follow Maja in pursuit to keep the tempo’s going as Michael’s sax does a bossa-nova groove featuring Andi’s dooming bass lines and going into this Joy Division like sound for a couple of seconds.

‘Cyan’ has this telephone-like ringing from Maja as it transforms into the tribute to Ottmar Liebert. With its flamenco-like riffs done by Michael and Markus to channel ‘Barcelona Nights’ from Ottmar’s 1990 debut release, Nouveau Flamenco. It’s quite an interesting motif, but it is always great for Akku Quintet to channel a different form of music which is their take of the flamenco genre.

‘Breeze’ showcases Maja herself by setting up the train ride that goes into the unknown worlds that have this alternate film score to Jean-Luc Godard’s 1965 science-fiction noir classic, Alphaville. Her piano work sets up these calm and ominous backgrounds that you can almost hear a pin drop as Michael sets up this closing finale that brings everything to a halt.

This was my second time listening to Akku Quintet’s Depart. And while I’m new to the band’s music, they really took me on a ride towards the edge of nowhere. This shows that Manuel is more than just a drummer for Sonar, but taking the aspects of Jazz and Minimal music throughout the heavier backgrounds. And with Depart, it is quite the challenge, but they always can come up with brainstorming ideas.