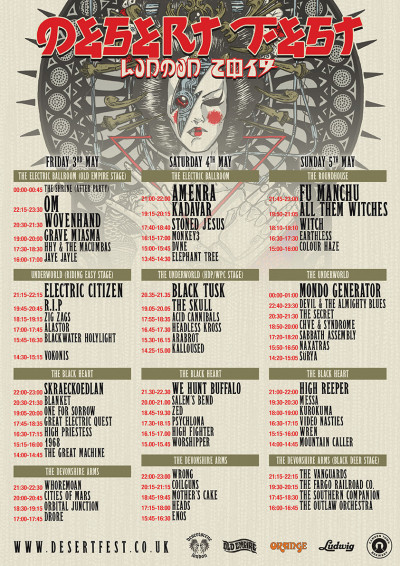 Sunday at the Roundhouse, and my first musical blast of the day categorically destroys any last-day afternoon festival tiredness, by the sheer joy of hearing Isaiah Mitchell’s guitar squealing at full throttle around the venue’s domed roof. If San Diego’s Earthless have any doubts or nerves playing a bigger venue, they deal with it in the best possible way by delivering what they are becoming experts at, and that is to give a Hendrixian masterclass of space rocket-fired jams. ‘Black Heaven’ and the song-orientated ‘Gifted by the Wind’ are both immediate belters before the second-half of their set is freed up for them to tear through a near 30-minute version of ‘Godspeed’ with incredible heft and power. This may be a Marmite love or hate for some, but for this reviewer, spread thicker, and longer, is all the fuzzing better!

The Desertfest organisers have an innate ability to awaken the fires of a long defunct band or pull one out of a long sleepy hibernation, as in the case of this year’s blast from the past slot, Witch. Positioning Dinosaur Jnr’s guitar maestro, J Mascis, to the backline playing drums is like, as an old saying once went, “playing Pele in goal”. And just to highlight this chuckle-some notion even further, J Mascis is indeed wearing, one assumes, a pair of white drumming gloves; but from afar they could easily be mistaken for, yes you guessed it, goalie gloves.

Anyway, on the more pressing matters of their performance, the band’s garagey Sabbath bluster battles through a very cloudy, murky sound which thankfully gets better as the set progresses, but never meets the same sound quality as Earthless who preceded them. This might be the reason the songs which stood out seem to be loaded towards the end of their set, but there is no denying the quality of closing number ‘Seer’, whose memorable riff soared around the Roundhouse set free once again to rightfully cast its alluring spell. (Andy Little)

From grizzled vets to a band who still seem fresh faced and new despite being about ten years into an ever more impressive career, Tennesse’s All Them Witches. The band are back to being a trio again, after filling out significantly live around the time they toured the Sleeping Through The War LP in 2017. Unlike Earthless earlier at the Roundhouse, this band have no trouble filling the stage. Using only one simple backdrop and some effective mood lighting ATW impose themselves and seem born to play to big crowds. They have a natural charisma and the aura of a band who know they’re good enough to mix it with anybody on stage. Singer and bassist Michael Charles is, as ever,  a relaxed and charming host.

Perhaps sadly we aren’t treated to their version of ‘War Pigs’, which the band have frequently taken to opening their shows with, but we do get plenty of firm favourites and a large helping of material from latest release, 2018’s ATW.

The tracks from ATW are remarkable for various reasons: ‘Fishbelly 86 Onions’, which sounds like an uncharacteristic splurge on the album, makes more sense live, it’s kinetic energy helping to energise the crowd; ‘Diamond’, which on record is one of the band’s most beautifully hypnotic moments, loses a bit of focus and intensity; but ‘Harvest Feast’ remains an absolutely stunning piece of meditative psych-blues.

What strikes me midway through the set is that they differ from many of the bigger acts over the weekend in that their influences seem to come from further back in history; I hear as much Miles Davis and Howlin’ Wolf in the psychedelic melange of their extended jams as I do Zeppelin or Sabbath. Drummer Robby Staebler, in particular, catches your ear with his swing and flashy percussion, although by the closing epic finale guitarist Allan Van Cleave has totally given himself over to his inner Jimmy Page, chopping out endless metallic blues riffs like he invented it. Follow that Fu Manchu!

And so to the band with the unenviable task of headlining this rocking bonanza, although one thing Fu Manchu have on their side is a set full of recognisable choruses, a rarity amongst the bands I have caught this weekend. Immediately the biggest pit I have ever seen at Desertfest opens up and mass headbanging breaks out as the Orange County stoner legends roll out some of their biggest numbers early on –  ‘Pigeon Toe Toe’, ‘Regal Begal’, ‘Hell on Wheels’, ‘Eatin’ Dust’ whilst singer Scott Hill dominates centre-stage like a gangly Shaggy-esque ringleader.

I catch my mind wandering after half an hour, and in truth I find the bands output a bit limited. We are not treated to any cuts off their latest (and possibly best) album, Clone of the Universe, which adds a bit of progression and invention to the bands trusted, signature sound. Fu Manchu still display their punk roots, but lack the infectious ire of the band they mostly closely resemble, Mudhoney, or the jazz chops of other, similar, lairy party-starters like the MC5. After a while, they just sound thuggish; the mild tempo changes and, admittedly, huge grinding riffs lose effectiveness over the course of the set.

So, the decision is made to try and catch just one more band before this whole thing comes to an end for another year, and so we head back to The Underworld in the hope of catching part of The Devil & The Almighty Blues set. We are in luck as the band are late to the stage; so we also have a chance for a breather, another trip to the bar and the chance to catch up with a couple of friends, also waiting for the Norwegian heavyweights. Now, this reviewer went into the weekend knowing zero about these guys; I was expecting my night to end at The Roundhouse and I hadn’t done any homework on them. One (very long) song in and I’m frothing at the mouth at how much I love this band.

When they finally emerge, all head to toe in black, and begin the long, slow intro to ‘Salt The Earth’ (I think, in retrospect) the hairs stand out on the back of my neck. The band possess the sort of heavy blues tone I hear in Metallica’s mid-period work on ‘Load’ –  there’s a soulfulness mixed with bleakness; a mature, seen-it-all tender toughness, underpinned by an outlaw spirit.  I get all this before singer Kenneth has even sauntered centre-stage and uttered a single note. And when he does, boy, the deal is sealed. Like the rest of the band, Kenneth is a bear of a man, and he possess a voice to match, reminding me at times of Joe Cocker without the sweaty, gesticulating demeanour.  When not singing, he goes and leans against a post at the side of the stage, arms-folded, clutching a beer, so as to give the rest of the band room to rock, especially bassist Kim, who marauds like a man looking for a fight.

Every song is a whiskey soaked saga, carried on sherry-barrel aged riffs and sublime twin guitar, top-note harmonies – the sort to make Thin Lizzy fans swoon. I cannot tell you what songs they played, but on the way out of the show I grabbed a couple of their CDs, as well as a t-shirt, and it seems like the set leant heavily on latest album Tre. Anyway, whatever they played it was all fantastic and finished my Desertfest on a wonderful, unexpected high. God, I love this festival! (Chris Ball)