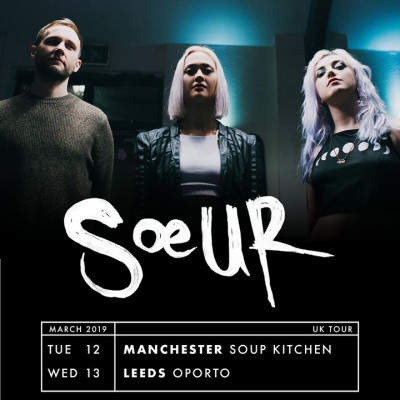 Local(ish) lads Trigger Thumb opened up the evening with ‘Does anyone know who we are?’ Well, a few did. No stranger to the weird and wonderful, as we are up here in Manchester. The band, a three-piece, Arron on guitar and vocals, Damien on Bass and Will on drums. Arron’s vocals range from the scratchy and edgy to full on melodic and tuneful, a bit like a early Matthew Bellamy in places (without the annoying breath before each line) and Serj Tankian in others. He plays a choppy, and often abrasive, mathy guitar. He has some licks that make even the more accomplished guitarists go “wtf?”. Bass chops along happily with the mathy licks. A little bit of slap creeps in here and there.  Drummer Will is similarly hyperactive, and needs to be to keep up! The band on stage, are energetic and fun. Much heavier live than on record and much better for it. Several people in the albeit thin crowd were enjoying the set – reacting to the band’s boundless energy. They are a great band and should really be much bigger than they are; lovely bunch of lads to boot. Go and see them.

In contrast, Sœur made their way to the stage without much fanfare. They open with a short instrumental, Tina (vocal and guitar) seems relaxed, Anya (vocals and guitar) is a little more on edge whereas James (drums) is chilled and focused. Having just interviewed them this is just how they are in real life. They are a band which are about as far from a “rock diva” cliche as it’s possible to be: relaxed, humble and funny, and really seem to enjoy what they are doing. After the short instrumental they go into ‘No Fire’ quickly followed by ‘Left Living’

Interestingly despite Anya and Tina’s difference in personality and stage presence, their vocals blend perfectly and their chemistry in wonderful. James, has some great little chops and plays with some deceptive power. He doesn’t seem to be one for much showing off, he lets his drumming speak for him. As it was the band’s first headline in Manchester, it seemed fitting that they played a never-heard-before song (which, I can’t recall the name of). We also heard the new single ‘No Show’.

The band seemed a good fit for Soup Kitchen; it’s a small and, to be fair, pretty grotty venue, not quite full but enough to be a good atmosphere but the sound there is stellar (hat tip to sound guy!) The band are a bit edgier and more expansive live. and I can start to see where where the grunge epithet comes from. Their penultimate song ‘Slow Days’ was stunning; they really are in their groove by this point; the song builds to a wonderful crescendo, before dying away again. Ending their set in a perfectly apt way. ‘Fight’ moves abruptly away from the tunefulness and harmony of the previous track, James showing his post-rock fills, and both Anya and Tina showing more of a venomous side.

As calmly as they came on stage, they left again with a similar lack of fanfare. Soeur are an unconventional band (dual guitars and vocals and drums with no bass) with an unconventional approach to songwriting; however, it just all sits perfectly together. They are a band who let their emotions show through their music. They’re down to earth with songs that can vary from riff-laden post-grunge to melodic pop; this all fits together to make for a great set. Evidently a band on a journey, and it will be interesting to see where it all goes.

Sœur are appearing at festivals throughout the summer, including Arctangent, and will be supporting Saint Agnes on tour in October.