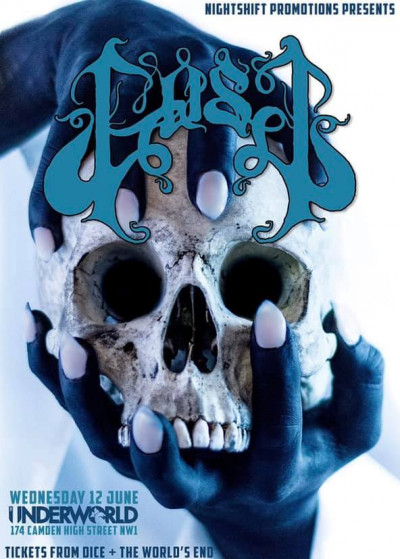 Metalheads can’t dance – but give us enough synthwave and we’ll do it anyway.

To those of you with a wider musical radar than I, you’ll already know that synthwave – darkly glitzy electronica, heavily inspired by computer game soundtracks from the 1980s – has been around since at least 2010. But it’s fairly new to me. I’m pleasantly intrigued and pleased by the fact that synthwave seems to be appealing to an extreme metal audience, judging by the bands with whom acts like GosT have shared stages, and there are certainly all the usual t-shirts and patches in attendance in the crowd tonight.

It’s probably because I come to this as a metaller rather than a clubber or a gamer that I’m intrigued about exactly how this will operate in the live environment. Metallers are used to standing and watching the band, maybe moshing a bit. Clubbers are used to dancing, chatting and occasionally giving props to the DJ for dropping a massive tune. So how will the two mix, in the Underworld, on a wet rainy Wednesday? Will people dance? Will they actually talk to people outside their own circle, or just stare at the main guy, arms folded? Well, there’s black metal on the speakers, so we’ll find out soon enough.

ORAX, a musician and producer from Italy, has played under this, his solo moniker, since 2011. Given that his music has been described as “retro wave”, it’s no surprise that his personal style (sunglasses, leather jacket and Bauhaus shirt) is Eighties’ Goth by way of Noughties’ All Saints – the effect is apparently “breathtaking” according to his mates in the front row. Fortunately his songs are as sharp as his dress-sense – up-beat, glitzy synthwave is the bottomline, but nicely peppered with moments of trip hop, pop, and atmospheric piano breaks before big-beat drops.

This kind of thing is getting pretty big at the moment, with names like Carpenter Brut and Perturbator appearing at major metal festivals. But a burning question presents itself. Is this just another wave of nostalgia for the Stranger Things generation? A brief hiccup of retro-cool that will quickly fade away like so many musical fads? I’ll return to this question shortly.

Well ORAX certainly goes down well, and tonight I’m proven wrong about metallers when many of the black t-shirted people shamelessly get their groove on. There’s something irresistible about this, certainly when blasted out of the Underworld’s cranked-up PA, and pretty soon I’m grooving along, too, zooming down data highways, cruising the streets of some sparkly dystopian city, the sky in the background the colour of a TV tuned to a dead channel. . . I think it’s technically an encore when silence descends and ORAX quickly lines up a new track on his laptop, a dirty broken beat with pulsating bass that recalls Nine Inch Nails remixes at their most effective.

Will a DJ on-stage ever be the same as watching a band? Not for me, no. But ORAX loves doing this, that much is clear, head-banging, punching the air and gesticulating dramatically. It’s difficult not to enjoy this when – above all – it’s so fun, up-lifting and energetic, and always adding just enough darkness to the disco.

Straight outta Texas, GosT are more at home with darkness, having earned themselves a reputation as synthwave meets black metal – they’re even returning to London later in the year supporting Mayhem no less! There’s certainly some mileage to this visually, with GosT’s corpse-paint-like mask, the black leather, cowls, skulls and inverted crosses. While the BM/SW crossover doesn’t really seem to happen on any of the albums I’ve listened to, it’s pretty accurate for parts of their live sound. GosT mainman, James Lollar, emerges from the smoky depths decked out in leather and trademark Halloween skull mask, accompanied by a live bassplayer, and we’re straight into a hostile kind of gabba-beat black metal where the synth sounds like tremolo guitar and the vocals are all old-school Dani Filth. The BM/SW crossover was always going to be controversial, especially in black metal circles where everything that isn’t 90s’ Darkthrone is controversial. But in truth there’s only really two parts where GosT’s sound truly approaches black metal, with the second arising later in the set where a post-punk chorus, sung in a melodic baritone, keeps getting gradually faster and nastier. Again, there’s something Cradle of Filth-esque about GosT at their most metal – like that remix of ‘Twisted Nails of Faith’, but heavier on the synth and actually sounding good.

GosT are often described as slasherwave, given the many references to and samples from 80s horror films that they incorporate. But this influence actually goes deeper: I can’t hear the short, staccato synth notes that often define the GosT sound on record without thinking of knives stabbing. So it’s a shame that this gets a bit lost in the mix to me, despite re-positioning myself around the venue. Not that this matters, with James leaping around the stage, mic in hand, or head-banging over his electronics station, and the bass-player slap-hammering his guitar like a funky machine-gun. While there may not much going on visually – no drummer, videos or projections – the duo’s energy soon whips up the crowd, with an awkward-if-friendly mixture of moshing and dancing breaking out at the front.

They’re certainly dark and heavy, but GosT are not just DJs playing metal. As far as this set goes, they mainly come across as a kind of tenser, minor-key version of influential French electronic duo, Justice – themselves no stranger to mixing metal – blending a variety of styles and genres into something new. By the end of the set, I can see how this genre-blending is enabled by both James’s versatile vocals – post-punk baritone, BM screech and tenor pop – and the addition of the bass-player whose gritty, dirty grooves can make disco sound like death and make dissonance funky.

Towards the end GosT rely on shameless synth-trance drops with massive bass drops and, despite their effective genre-blending, it’s difficult to rectify the Pete Tong moments and the Eurythmics fan-boy touches with the caustic mayhem of their introduction. But that doesn’t stop this crowd of closet dancefloor divas demanding no less than two encores from an already action-packed and ridiculously enjoyable set.

So, to return to my question: is this all just sonic nostalgia that will soon be replaced with – I don’t know – grunge-wave, nu-metal-wave, anemic-NME-indie-wave? No, I don’t think so. ORAX, GosT and the like are dragging the best parts of the 1980s forward into the 21st century, with sharper blades and even cooler shades. It’s something of a revelation to hear intelligent music that captures the dark atmosphere and violence of metal, but actually inspires us grumpy old metalheads to dance. As for how they’ll be received supporting Mayhem, we’ll just have to wait and see. . .