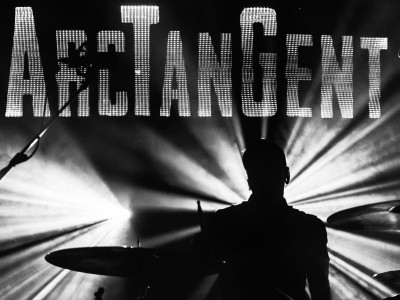 Saturday at ArcTanGent is thankfully a drier day than that which preceded it. Alas, that doesn’t translate to easy going, as the ground under foot is still squelchy in the extreme. Those prepared to trudge through the mire as early as midday are treated to an exemplary performance from Midas Fall. Oft described as ethereal, their sound is gothic and delicate, but still packs a punch. With live bass and drums underpinning Rowan Burn’s chiming guitars and Elizabeth Heaton’s emotive lead vocals, Midas Fall are, as a live entity, almost a model of balance. Rhythm, melody and harmony form a neat trinity; song craft and post-rock dynamics counterbalance each other to perfection.

Matt Calvert’s short solo set sees him accompanied by eight musicians! Strings, keys and a variety of percussion instruments including vibraphone are used to recreate Calvert’s compositions, with the Timelines album comprising the majority of the set. The crowd is quiet and appreciative, but such cerebral tones fail to set pulses racing, and it’s notable that the best received track comes towards the end of the set when Calvert leans heavily on the nimble drumming from Three Trapped Tigers cohort Adam Betts. Overall Calvert’s set is worthy of its place on the bill, and given this is only the third time the tracks have been performed live there’s a feeling we’re watching something special. 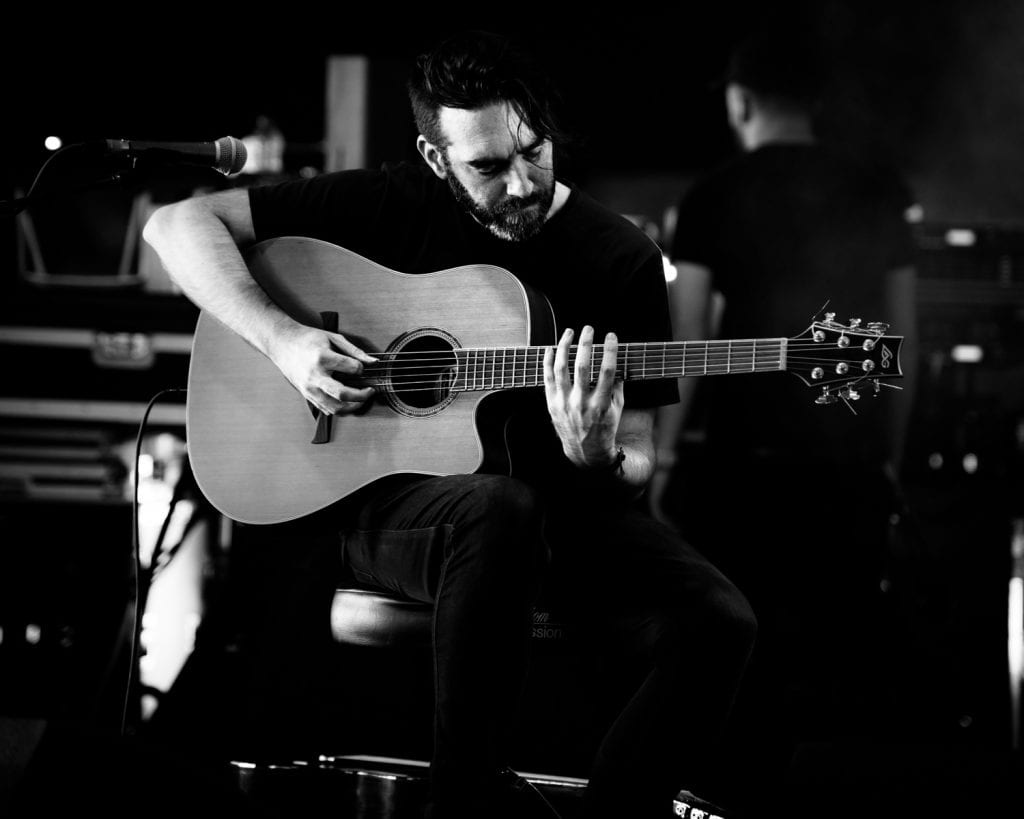 Over on the Yohkai stage, Curse These Metal Hands do their best to emulate their groundbreaking debut performance on the same site one year prior. Made up of members of sludge metallers Conjurer and the more post-rock Pijn, the group don’t quite amount to the sum of their parts. Perhaps it’s a case of too many cooks, or simply too many vocalists: it all makes sense, but fails to translate into something emotionally connecting. They cheekily sign out saying “thanks, we’ve been Baroness”, and there is a lot of the American band’s influence on their sound. Perhaps it’s all too early in the day, or too derivative, but Curse These Metal Hands fail to ignite as they promised.

The Physics House Band up the ante considerably, performing the majority of their new EP during their high-octane, thrilling set. At times it seems like the instruments are fighting each other for space – with polyrhythmic parts coming in and out of phase, there is frequently a lot going on. Make no mistake; this is dense, complex music and no mere crowded mess. Miles Spilsbury’s oft-discordant saxophone squalls are front and centre of the band’s sound, and particularly characterise the stop-start ‘Death Sequence’. Effortlessly adept musicians all, it’s only drummer Dave Morgan that doesn’t moonlight on synths during the breath-taking show. 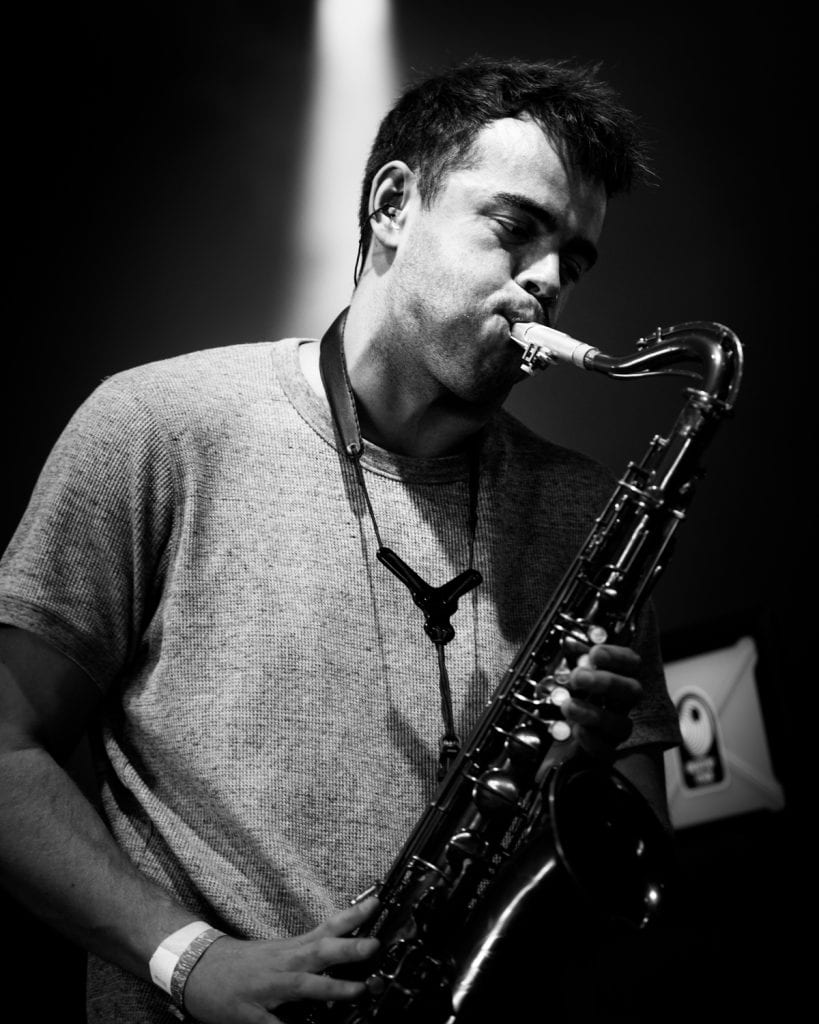 Physics House Band are the perfect warm up band for the next act on the Arc stage, Three Trapped Tigers. The London three piece are brilliant, as usual, but beset with technical issues: there are lengthy pauses during the set as keyboard techs attempt to restore sound to Tom Rogerson’s keyboards, one track has to be abandoned, and throughout, the kick feels overpowered by the snare drum, giving the mix an 80s throwback feel. When things go well, such as on the bright, shiny tones of ‘Rainbow Road’ or insane arpeggios of closer ‘Reset’, all is forgiven. 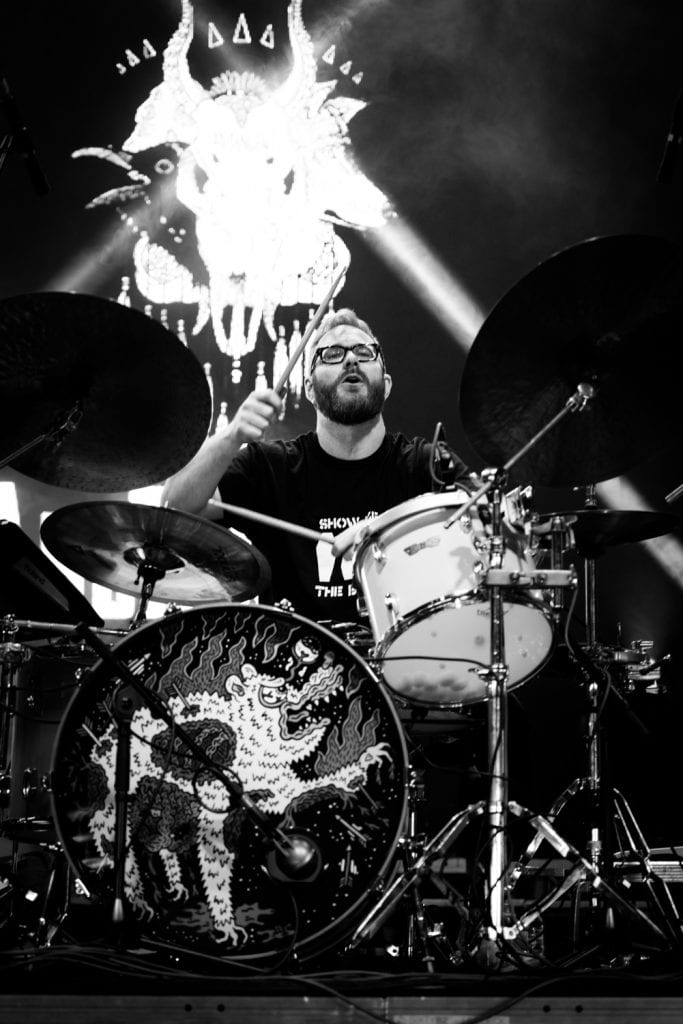 The Bixler stage proves far too small for Elephant Gym, whose profile is rocketing. Put it down to the slinky, chromatic bass playing, the unusual sibling chemistry, or simply mark them as fusion’s answer to the Yeah Yeah Yeahs; it doesn’t matter – the Korean trio’s audience grows throughout their set, and they make a hell of a lot of noise for such a compact outfit. Elephant Gym are definitely ones to watch.

Sunday’s main stage unannounced guests are none other than And So I Watch You From Afar, celebrating the 10th anniversary of their stunning, eponymous debut album. Their set is no mere tip of the hat to this milestone – instead, they opt to play the album nigh on in full. From ‘Set Guitars to Kill’ to ‘Eat the City, Eat It Whole’, the band remind all present of what initially elevated them to post-rock’s premier league. This gimmick-free, atmospheric guitar music of the highest order is lapped up by the audience, whose surprise at the band’s billing seems genuine. ArcTanGent deserve credit for pulling off such a coup and making the late afternoon slot special in every sense. 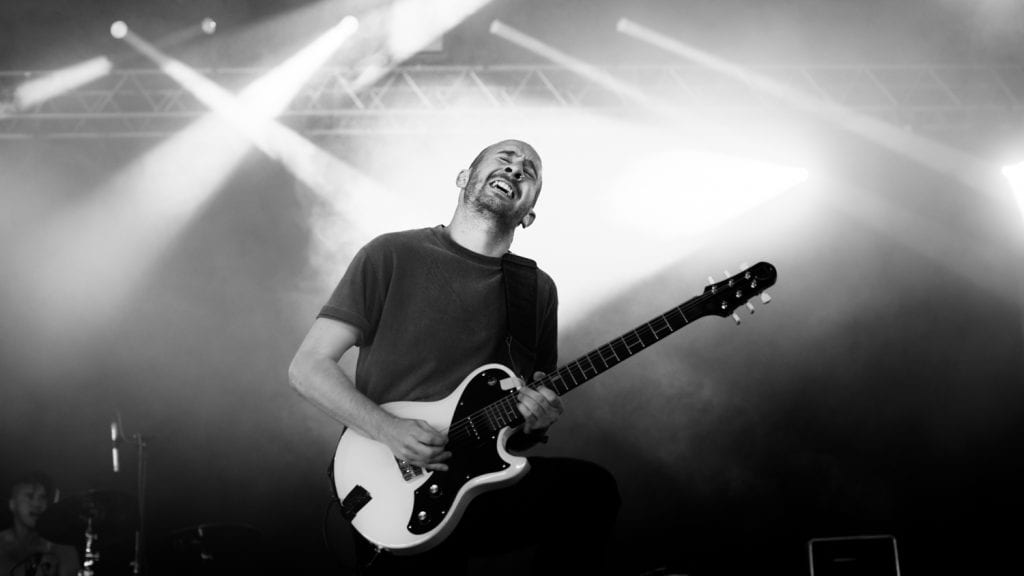 Rory Friers – And So I Watch You From Afar. Photo: Simon Kallas

Part of the appeal of Gnod is not knowing exactly what they are set to deliver on any given evening. This evening they present a towering inferno of one-chord heaviness, circular riffs echoing off the walls of the Yohkai stage as the band create an intense, anti-spectacular wall of exhilarating noise. It’s big, it’s not clever, and it’s unmistakably Gnod. The band don’t appear to win over too many converts on the night, as the crowd are thin on the ground, but their disciples are suitably impressed by their bludgeoning approach. 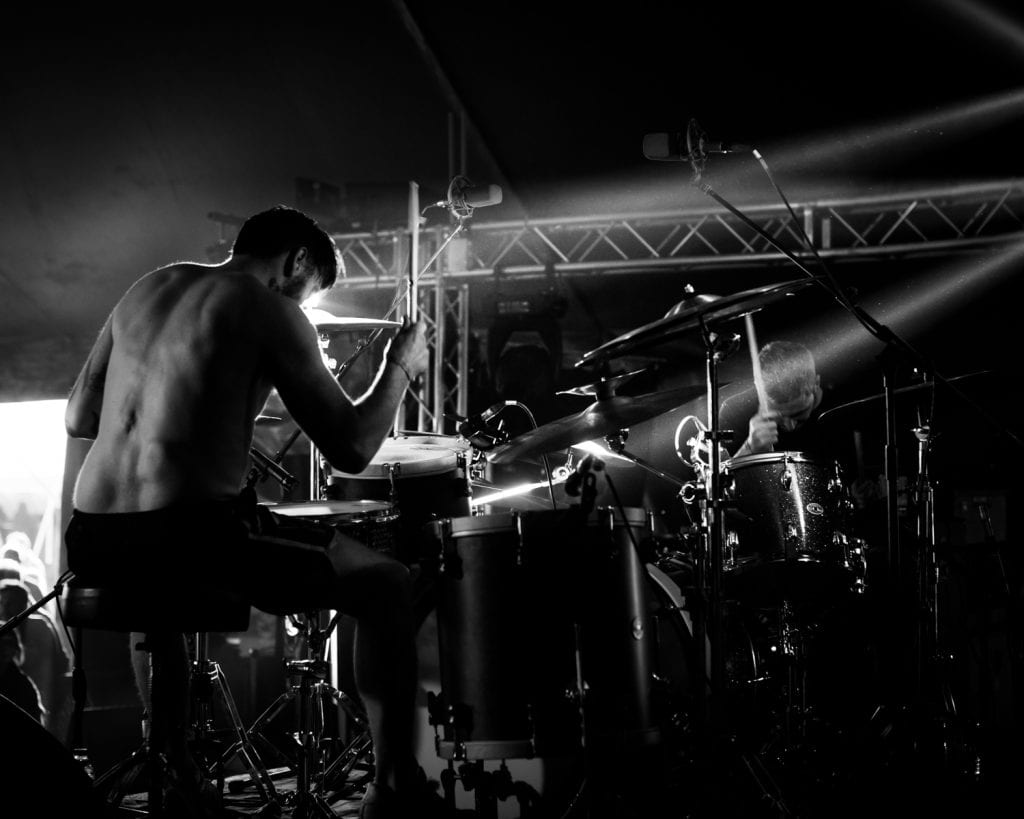 Cult of Luna achieve maximum impact by subtler means. Opening with new track ‘The Silent Man’ is a statement of intent, demonstrative of how the group’s sombre, meandering post-metal dirges explode with energy when required. Fellow new track ‘Nightwalkers’ showcases the band’s dual drumming attack. There is an air of Gothic solemnity surrounding Cult of Luna’s set this evening, even if at times the slow tempos start to grate. On another occasion, they could have headlined. 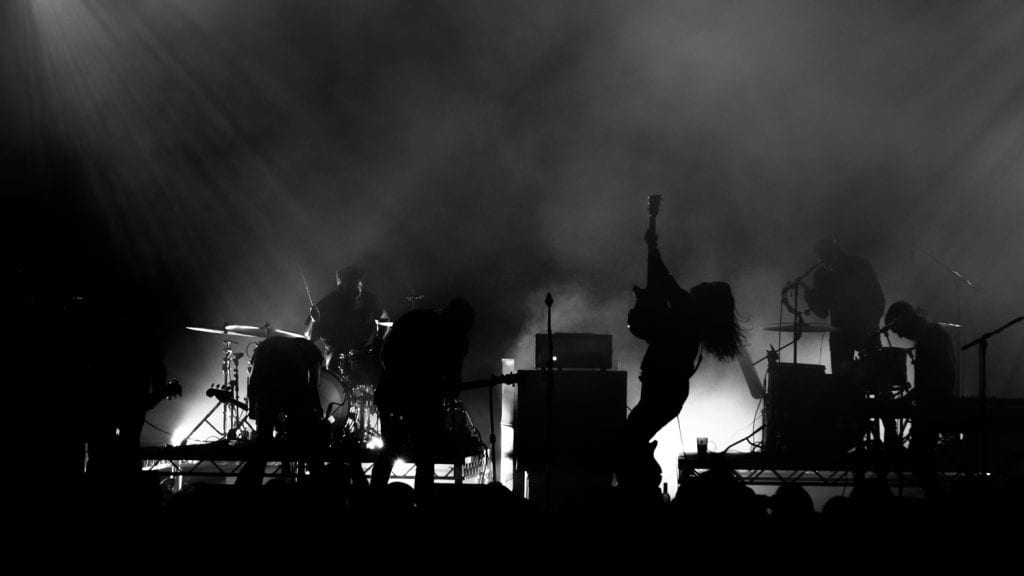 Massachusetts’ Caspian are an obvious choice to conclude affairs on the second stage. Like Cult of Luna, they have new music to premiere, and the latest album offering is well received. Caspian delight the audience with two tracks from Dust and Disquiet, the spritely ‘Ríoseco’ and ‘Arcs of Command’, which builds in a typical post-rock arc to fantastic effect. Yet it’s the relatively unknown EP track, ‘Castle High, Marble Bright’, that closes proceedings and takes most plaudits. The track’s chiming guitars and solid kick drum have in fact been the band’s calling card since 2016, but for those who last caught Caspian on the Dust and Disquiet tour, it’s a revelation. If post rock fans bought more records, this track could have been Christmas number one. On a day of many highlights, Caspian shine that little bit brighter than their contemporaries. It all bodes very well for their forthcoming LP, out later this year. 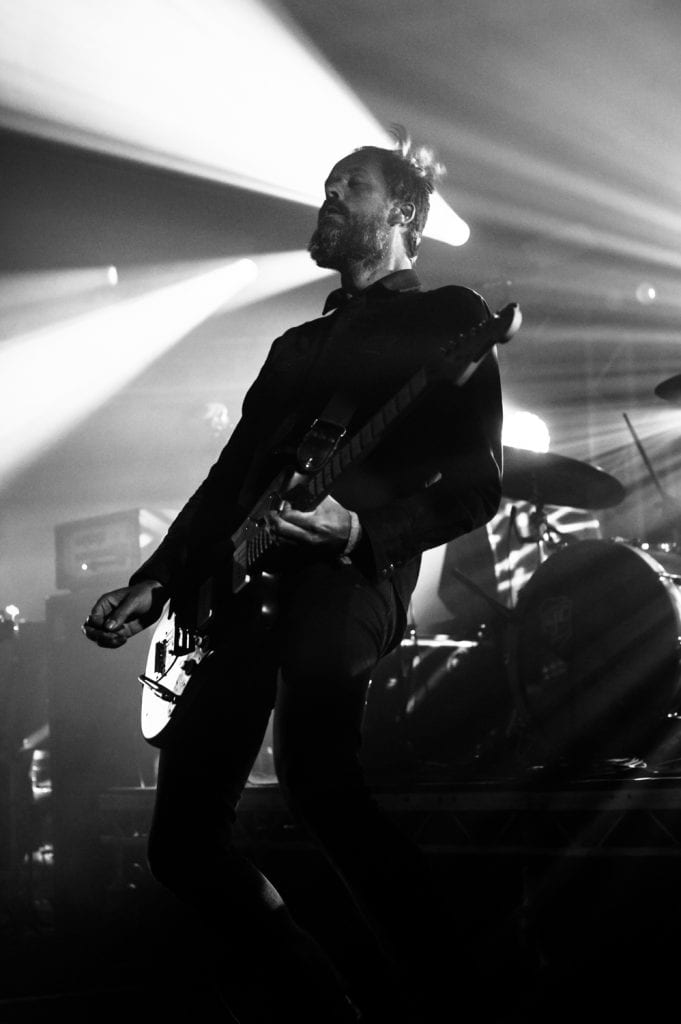 It’s left to post-metal’s biggest draw, Meshuggah, to round out the day. To accuse the Swedes of being populist would be a bizarre charge: bands as extreme as Meshuggah don’t really have hits. Yet they play as close as they can to a “best of” set, touching on all points of their long career. Arriving on stage to the sounds of 80s power ballads, and with a Geiger-esque stage set, theirs is a headline show full of verve, originality and, of course, bone crushing heaviness. That the lighting engineer manages to match Thomas Haake’s polyrhythms with flashing effects is impressive in itself. 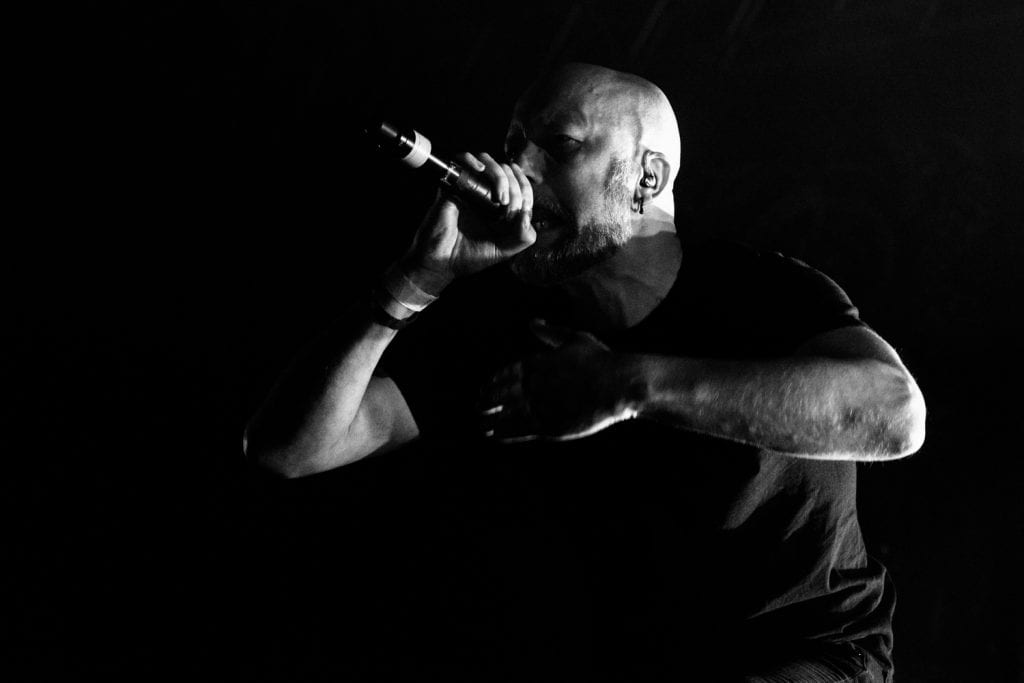 Musically, Meshuggah traverse territory that no-one else quite matches. Fans of straightforward heavy metal latch onto direct, downtuned efforts, such as ‘Bleed’, which hits home hard. Those more inclined towards expansive vistas look to the closer ‘Demiurge’, which couples a strange ambience to its assault of riffs. Throughout, Jens Kidman’s growls are arguably the most impassioned all day. It’s far from phoning in a performance, but in spite of the technicality, the band do not put a foot wrong all set. In short, Meshuggah provide a fitting climax to a day of music of such high calibre there’s barely time to catch a breath. In spite of the mud, Saturday at ArcTanGent 2019 is a triumph from start to finish. 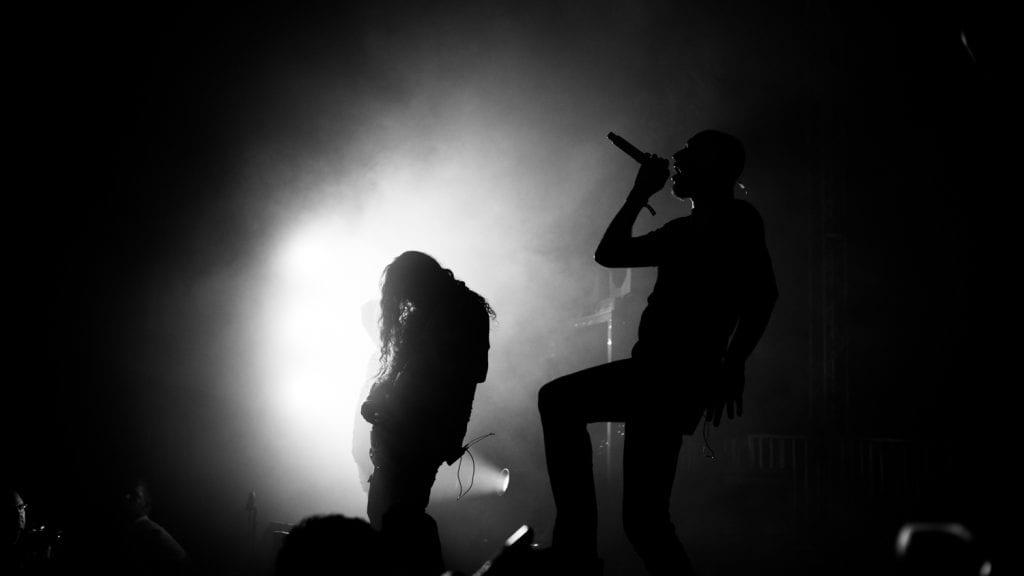