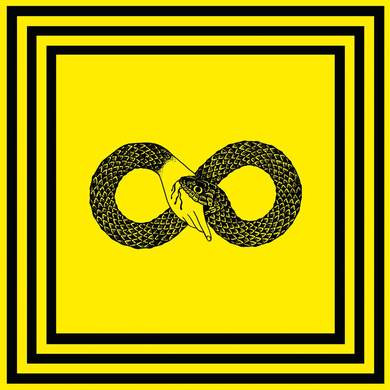 Sometimes an album comes along from seemingly out of nowhere, and becomes a mainstay on your music player. Quite often they are spur of the moment, flash in the pan types, yet with Infinity Forms Of Yellow Remember, you get the inkling that they may actually be the real deal. Maybe it’s blasé to state that not since Definitely Maybe or whatever debut zeitgeist album takes your mind, arrived so fully formed that a band…, becomes a word of mouth descriptor, but for the length of this record, and beyond, you can’t help feeling that there is something special at work.

Whilst Infinity Forms Of Yellow Remember sound nothing like those erstwhile Definitely Maybe makers, there is a definite swagger about the band, and on the opening volley of ‘Sub-Sonic Dreamer‘, you could even be forgiven for thinking here comes yet another lad band, such is the nasal attitude slinging its left hook at you as you recoil from their pounding riffs. Think Kasabian if they had the balls to drop mescaline and you might be there. That’s it for lad rock references though.

Before long you realise that there is much more to this band than catches the ear. Around the halfway point of ‘Surely The Know‘, they suddenly throw a curve-ball into Beach Boys harmonic territory, belying their roots in wet and windy Cardiff. It’s an intense moment of gleeful pleasure, and sounds absolutely marvellous as its blasting out from the speakers. Oh yes, this is an album to be played loud. Very loud.

Those opening garage rock blasts are nothing compared to what follows though, and as the calm waves of ‘Great Vibrating Season‘ slowly build into a mantra of driving bass, cacophonous drums, and chanted vocals, any observations that these may be a flash in the pan act are casually thrown off. It’s rare that you get music so fully formed as this on a debut release, and whilst there is always room for tweaking, you get the feeling that its the rough edges that provide the charm. Much like early Spacemen 3, you just let the music take you, always expecting the odd bump in the road. That’s life innit, and this is music for life, even as the song stretches itself out into a 16 minute epic, you never once want to stop the ride. If the middle section of this track doesn’t give you shivers then you have no call for believing yourself a psych fan. This is psych of the highest order. As ever, trust the Cardinal, he always knows what he’s talking about, and as ever Cardinal Fuzz continue to release ever excellent affairs.

‘Walk With The King’ is no pass me by either, as its ominous bass ushers in some rather marvellous phased harmonies, before eventually exploding in full on Hawkwind circa ‘Brain Damage‘ space rock. This track simply powers along! It’s the full on throttle of life grabbing you by the shirt tails and thrusting you head on into oblivion. Vital, man. Totally fucking vital. As shards of liquid guitar melt over the top of the roaring riff, the wheels feel like they simply must fall off, yet sheer velocity keeps it going, until suddenly…the riff drops off and you are left with just the vocals. That’s just for starters. As the song finds its second (third?) gear it throws itself full tilt into a free-form spaced wig out, searing a pattern of fire into your skull, and mind. At least what’s left of your mind. The poor neighbours wont know what’s hit them as once again a wave of explosive molten guitar rages through the speakers.

It’s the way in which Infinity Forms know when to step off the pedal, and let the quiet in that sets them apart from many of their heavy psych peers. It’s an understanding that without the calm, you can‘t have the storm, and through that they channel some of their trippier moments. The drone like echo that signals the start of ‘From The One Comes The Many’ begins as a miniscule sound in the background before embracing the total as in the background ambient noises draw you in. Acting more as an interlude after ‘Walk With A King’, it also serves to cleanse the mind before the blues inflected harp of ‘Sun God – Grave Goods’ brings an almost reverential close to the album. Like the dawning of light, it may play on the time-worn blues gospel of J Spaceman, but also evokes a weird Americana, a dusty highway, a yearning for escape. Not that there is much American in these guys, but most definitely an appreciation for the blues form. It’s a timely reminder that psych crosses all boundaries, and with it comes an absolute melting pot of styles, inspiration, and creativity. In time other bands will take from Infinity Forms, and so the circle will continue.

There’s nothing much left to say after that apart from with their self titled debut, Infinity Forms Of Yellow Remember have created one of the best albums of this year, and that is no mean feat considering the competition. Even better is the sheer excitement that you get from discovering a band who haven’t just wormed their way into your world, but also excited your passions in music that you simply cant wait to see where they go next. Infinity Forms are quite simply one of the most exciting bands to emerge from this country for a while, and included in that is all their ramshackle charm. Let’s hope they keep the innocence, keep the creativity, and keep aiming ever higher. Psych is most certainly not dead, at least in Cardiff, Wales.