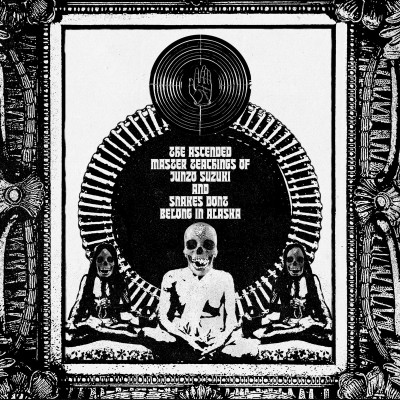 The Ascended Master Teachings Of... by Suzuki Junzo and Snakes Don’t Belong In Alaska

To even try to review an album such as Suzuki Junzo and Snakes Don’t Belong In Alaska‘s The Ascended Master Teaching Of... in any “usual” manner would be ridiculously silly, and one has to appreciate that music like this doesn’t conform too any of the generic tropes of song-writing. We’re not talking songs here man, we’re talking sound. Sound as in monolithic walls of sound ripping at your fucking mind until you don’t know whether you are facing north, south east or fucking west. Sound, man.

Collaborating to searing effect, Newcastle upstarts Snakes have joined forces with the enigmatic Junzo for some “out there” explorations in the outer zone. Already spiking high on any psych fans radar, Snakes are the band to watch, the new kids on the block who may just take over the old kids, the ragtaggle bunch of heavy psychers who clearly only give a fuck about the music. That’s why we love them. That’s why they are on Cardinal Fuzz. Add in the guitar meanderings of Junzo and we are heading straight for the planet called inner space. The one right inside your mind.


And that’s how it works. The heavy slabs of noise are accentuated by the lucid, liquid guitar playing of Junzo which seeps through every pore as if it’s some viral infection, waiting to transform you into an appreciative psychonaut. Check your head as it starts to nod, first in respect, then in awe. Behind it all those heavy, heavy monster sounds both demolish any semblance of reality, and also provide the only firm grounding that you need. After all, you don’t want to stay on planet Earth do you..well, do you? You do? What on earth are you doing here…oh, you like the music? Welcome, this is how it begins…

Maybe to add some seriousness to the light-hearted trippy nature of this review, it’s safe to say that we are in the presence of something quite special here. The album taps into the kind of exploratory wig-outs more in tune with free-form jazz, no doubt enlightened by the name-checking of Sun Ra on one of the song titles. Rather than noodling though, this aims straight for the heady heights of space. Seek out the mid-section of ‘Outer Heavens Gate pt.2’ for some serious high action, as the riffs and guitar mould into one and become a searching beacon of space. It’s revivalist, intense, beautiful, and quite frankly, one of the more uplifting moments you’re gonna find on a psych album this year. That we are only halfway through the album says a lot about the confidence in what both artists are creating.

So heavy noise, wild guitar, trippy listening, and the feeling that your head has been through some sort of reconstruction. To put it plainly, this is music for head, by heads who probably should know best. It’s the best heavy psych album of the year. The best instrumental psych album of the year. Probably by the band of the year if we are being honest. You like psych? You need this in your life. This is the fucking top drawer goods with added drugs on top. Snakes may not belong in Alaska but they certainly belong in any self-respecting psych fans record collection.