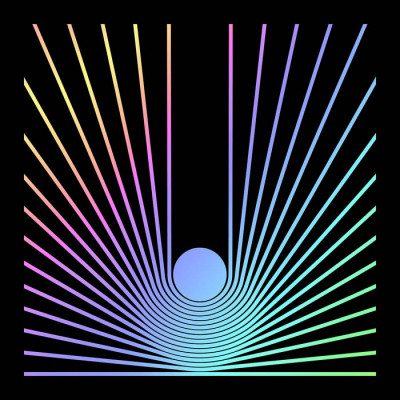 S/T by The Utopia Strong

Turns out Steve Davis is not just good at snooker. The six-time world champion makes up a third of The Utopia Strong – having got into modular synthesizers a couple of years before this album was made – and it is clear he is not just here for window dressing. He is joined by Kavus Torabi, a long-time collaborator of Davis’s on radio and a member of Gong, Knifeworks and Cardiacs, and Michael J York – of Coil and Guapo – and the result is a woozy, cosmic testament to the benefits of spontaneity. Or at least evidence of what can happen when three like-minded people with wildly different life experiences get together and make music for fun.

The tracks on this album started life as jams, with no plan whatsoever to make a record. As Davis puts it, “We hung out so we could have a laugh together. But we made some music, improvising and jamming, just for the fun of it and it was recorded by Mike [York], who had the presence of mind to record the sessions. We listened back and thought ‘bloody hell! This is exactly… we would like to listen to stuff like this, why don’t we make it into something more?”

It is lucky for us that they did. Because from the opening track, ‘Emerald Tablet’ with its clear-pool-and-crystals vibe, this is an album brimming with warmth and good feelings. ‘Konta Chorus’, which follows, is a highlight, in an if-Ozrics-did-krautrock kind of way, while the trio of ‘Swimmer’, ‘Unquiet Boundary’ and ‘Transition To The Afterlife’ would serve as an excellent soundtrack to a spacewalk.

The showstopper, however, is the 10-minute ‘Brainsurgeons 3’, which builds from a simple techno beat and minimal bass, travels up a euphoric crescendo involving tambourines, bagpipes (more on them later), and what sounds like a soprano sax (!) into something which Fuck Buttons may produce in a more lethargic frame of mind. It is amazing! Davis and Torabi knew they had hit upon something good when they began playing it at their club nights – and large portions of the dancefloor began pointing their phones in vain at the speakers, desperate to figure out where this mysterious tune had sprung from.

It is clear that once The Utopia Strong had hit upon the notion during their jam sessions that what they had made was actually quite good, they resisted the urge to mess about with it. Indeed, what we are hearing in some instances is what was made at that point in time, with all the ad-hoc mixing that comes from plugging a multi-channel synth into a single recording channel.

Davis explains: “When we formulated the tracks we were very limited – in a good way, actually – by how much we could change things. It sounds very raw because it can’t be sophisticated due to everything being locked into another sound. The sound level can’t be changed because everything else [going into one band member’s channel] would be dropped as well.”

That is especially evident in one of the more tense offerings on the record, ‘Do You Believe In Two Gods?’ the penultimate track which features an imposing drum beat and an unnerving sequence that gets twisted, filtered and its waves mangled at a slightly uncomfortable volume, then accompanied by bagpipes (pipes and synthesizers sound great together, despite what you may think). It all serves to put the listener on edge. The band describe it as “frantic” and “wonky”. We tend to agree.

No problem, though, for the final track ‘Moonchild’ (thankfully not a cover of the Iron Maiden classic from Seventh Son of a Seventh Son) sends us away with blissful, lush, dreamy vocals from Katharine Blake accompanying a sleepy drone.

It is a fitting end to an album that the band members were surprised to even make (“There was no plan apart from me and the other two guys getting on like a house on fire,” Davis said) let alone unleash to the world. We’re glad they did.