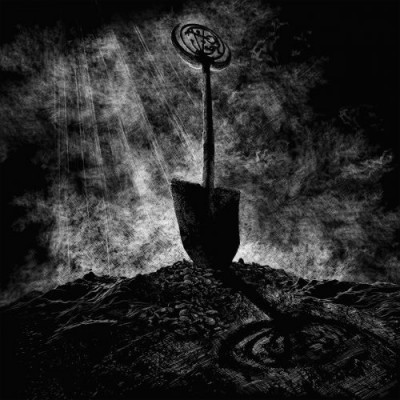 The world of horror is no stranger to either the gaudy splatters of synth music or to metal’s predilection for all things stabby, and there’s no point in pretending that the three haven’t had their dalliances in the past – remember, Rob Zombie was, and still is, a thing that exists. On the black metal side of things, though, there’s always been an elements of isolationism and a general disdain for playing well with others, with the cybernetic blitzkriegs of Aborym and Mysticum certainly more the exception than the rule. For GosT, the idea of bringing the Satanic majesty and iconoclastic spirit of 3rd-wave black metal in line with slasher chic and synthwave is nothing new, but it was really on last year’s Possessor that the marriage really bore fruit. It was cold, furious and unmistakeable cool, and Valediction is all of that and more.

The move becomes apparent within perhaps 5 seconds of pressing play, ‘Relentless Passing’ coming in hard with synthesised blastbeats and barbed-wire screams. It’s a blistering amalgam of black metal fury and coldwave detachment but as it dims and Baalberith delivers a honeyed vocal turn, alternately pleading and threatening like Dave Gahan’s serial killer alter-ego, it starts a see-sawing between mayhem and sleazy good times that swings to and fro throughout the album’s ten tracks. While much of Valediction finds itself divided between mid-80s Gothicism and unhinged fury, GosT has a deft knack for finding the elements of both that can fit comfortably beside each other and bonding them with a great hook or a deliriously Moroder-esque beat.

That’s not to indicate that the transitions between themselves are particularly smooth. The savage elements of ‘Timeless Turmoil’ are delivered in a searing frenzy, a barely-restrained deluge of derisive howls, blasts and discordant synth that all seem in constant opposition, yet when the cleanness does kick in, it feels a little too restrained, a touch too remote from the fury of just a few seconds earlier but given the perverse streak that has always run through GosT’s output, it’s more than possible that the jagged nature was intentional all along.

Valediction might be the now-duo’s most ‘metal’ output to date, but it’s the gothic sleaze that sits at the album’s centre that best defines its character. ‘Bloody Roses’ is a stalker’s love letter to Erasure, ‘The Call of the Faithfull’ is a simply massive Italo-Disco excursion through dingy alleyways and rainy, neon-lit streets and ‘She Lives In Red Light’ brings back a touch of their formative synthwave melodicism and attaches a new-found aura of subtle menace to create what might be the record’s standout moment. Bookended by the album’s most caustic tracks, these three tracks make for brief respite but also serve as a tasty treat for those with a more classically-minded palette.

Valediction does sometimes feel like a sequel of sorts to Possessor but if it is, it’s one in the same vein as Nightmare on Elm Street 2: Freddy’s Revenge, bearing some of the same elements but with a braver, more confrontational spirit and a sense of being a much more personal creation. It still feels like GosT in flux but much more in line with their true vision and if their final destination is anything like what we’ve seen here, it’s going to be an interesting ride.