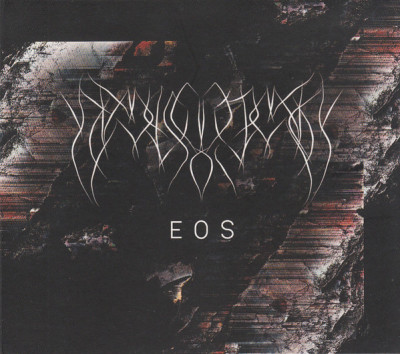 Existing as an extension of the possibly-on-hiatus USBM act Twilight Falls, Starless Domain started recording last year with the sole goal of creating black metal that could capture, if not rival, the all-consuming emptiness of outer space. Cue plenty of synths, barren howls and enough dark ambient flourishes to keep a troubled artist deep in introspective seclusion for an eternity. Strangely, their debut feels like a very natural release, not only dealing with what could be a kitsch concept in an atmospheric and largely unorthodox fashion but also handling the dilemma of constructing a single, hour-long black metal song and not having it send the listener into a blastbeat-induced coma.

From the sci-fi chill of EOS’ opening moments, backed with screams echoing off into the void and synthesised swishes and bleeps, its rapid descent into coldly oppressive fury and its dying throes, strange signals locked in internal call-and-response, it’s an album that doesn’t flow as much as it ripples. There’s a push-and-pull at work with the atmospheric and savage sides of Starless Domain’s sounds that occasionally overlaps but more often feels combative, each encroaching on the other’s space and taking over the album’s momentum before the other inevitably strikes back. In the context of space itself, it feels apt – nature abhors a vacuum, after all, and what can appear to be still on the whole is nonetheless punctuated by violence, as well as created from it.

Ash Fox’s use of both analogue and digital synths help to create not only the sense of vastness that their music is obviously aiming for but in its sometimes obviously electronic nature, it recalls memories of forgotten sci-fi gems and their accompanying themes, images of being abandoned and drifting endlessly through a cosmos that neither wants you there nor really cares for your existence. Conversely, Fox and Andrew W. do occasionally utilise more earthly instrumentation, be it in the swirling masses of blackened chaos that always teeter on accessibility but never really gives themselves over to it, or in their use of bouzouki within the few brief acoustic interludes that surface within their long voyage.

Along with their usage of three vocalists on what feels like a largely wordless endeavour, each of them more or less just a component in a series of existential howls into the abyss, Starless Endeavour have seemingly managed to achieve their goals on their first attempt. EOS is an imposing album, something that captures the horror and solitude of cosmic nothingness through atmosphere, space and skilful manipulation of all the tools at their disposal, and even if its runtime might be a barrier to some, it’s worth the effort if you long for a black metal album that you can completely immerse yourself in.