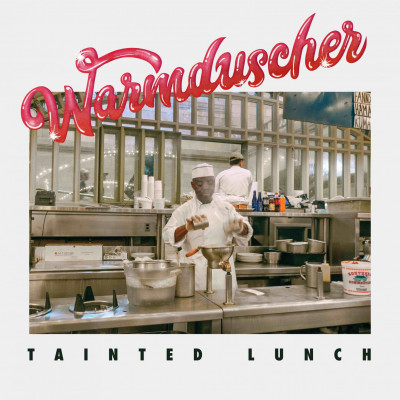 Warmduscher are back, which is great news because it never felt guaranteed. There’s something makeshift and volatile about them. It gives them their cracked, dark charm I guess. Amazingly, it seems they walked away from that whole Whale City car crash thing with little more than emotional scars and a couple more tall tales.

This new album delights in the glorious title Tainted Lunch and it feels like an illicit midday trip to the bar. Throwing back shots, cranking the jukebox and cackling over the retelling of unlikely misadventures. Soiled and joyous. It opens with a glitching ad break intro voiced by Iggy goddamned Pop no less “non-stop ’til it drops, a table for everyone… “Here we go ‘Tainted Lunch’ is tense and over caffeinated, rolling on an urgent Fall bass line. Clams Baker is still a hyperactive motormouth, jabbering through a parade of slights and frustrations peppered with surreal asides.

The single ‘Midnight Dipper’ you might already know from its great ‘black metal band get lost in the woods’ video. It’s a chewy and irresistible disco groove with wild man vocals and some hip hop moves. ‘Disco Peanuts’ doubles down on the chanted bars and handclaps over some old skool drum machine and thin, lurid, keyboard  before going kind of lo-fi speed-damaged Moroder in the second half.

In the parlance of our times, Warmduscher are genre fluid, leaping about all over the musical map, punching the jukebox for the tunes that scratch that itch any which way. From the wired mania of ‘The Chimp’ into the wonky, diseased bossa nova of ‘Precious Things’. They do this casually with something almost like honesty, or at the very least with a convincing energy. They don’t care for your knowing approval, rather you shook your ass than stroked your chin. If there’s a moment that best catches the prevailing mood, it’s the wonderful Funkadelic gang vocal that winds up the bug eyed 80’s synth funk of ‘Dream Lotion’ with the eternal waster’s plea “do you really have to sign on in the morning, yeah?”

Kool Keith rolls by with the earworm chant “call me on my burner, call me on my burner“, and they really shoulda tugged on Iggy’s sleeve a little longer and got him to guest on ‘Blood Load’. A fantastic, prowling, monomaniac Stooges stomp it’d be an absolute knock out punch to get Clams and Iggy trading verses on that monster. Having got it out their system they close out on the heartfelt confessional ‘Tiny Letters’, Clams testifying over some delicate circling organ.

Tainted Lunch is a freewheeling picaresque with a heart of gold. After the road trip urgency of Whale City it might seem a little directionless, unable to see past the next couple of drinks, but it’s full of life all the same. Lost in its own run down neighbourhood the dystopian unease of 2019 is woven deep in it’s rich, moth-eaten, tapestry. In desperate and uncertain times Warmduscher are the punky disco party band we need, Cap’n Beefheart and The Sunshine Band. What they offer is less glib escapism than short term liberation through absurdism and the healing power of music. How can you say no that?