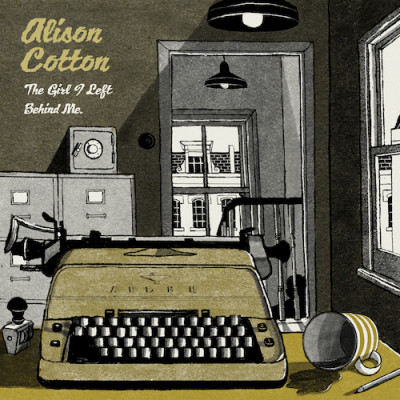 The Girl I Left Behind Me by Alison Cotton

As well as making music as one half of the excellent The Left Outsides, Alison Cotton has been cutting a rather fine path as a solo artist with some bewilderingly bewitching turns on the viola. Last years All Is Quiet At The Ancient Theatre was an exercise in haunting grace, providing a stark accompaniment to the day job, and it is with great pleasure that we find her returning so soon with The Girl I Left Behind Me.

A shorter album/EP at only two songs, it nevertheless grabs your attention for its twenty six minutes, and then lingers on long after it has finished. The first of the two pieces was originally commissioned by Gideon Coe of 6 Music to soundtrack a Muriel Spark ghost story. Following that is a new piece, once again inspired by Spark, providing a resonance across the two pieces which will relate well with long time listeners of Alison Cotton and the way in which literature, art and culture is intrinsically linked into her music.

Landscape, buildings and in particular, the space found between them forms an integral part of the thematic concerns of Cotton’s viola playing too, and as these two pieces drift over you, they create images of melancholic dissolution, as the old ways crumble away, often leaving behind nothing. That sense of loss pervades the haunting strings of the title track especially, although listen closely and you can hear the sound of hope as nature adapts and reclaims. For every lost building is a reclamation just waiting to be found again.

Seeping in through the pores of the pieces is Cotton’s vocals which take a subdued, yet almost choral approach, and serve as a harmonic background to the distinct viola playing. That sense of everything slowly being filled in, the spaces blooming with colour, that fight against loss into a growth of belonging, yet always underpinned by a feeling of melancholy. It is music which elevates your soul and sustains you. Even though you may not realise it at first, that fix soon grows into a remarkable balm which soothes your aches and pains, be they physical or mental.

There is little else that exists within music which sound anything like Alison’s playing, and for that she remains a rather singular talent. This release presents yet another piece in a wonderful jigsaw of music which when looked at as a whole, is a remarkable accomplishment. You sense that this is only the tip of the iceberg though, and that longing for more music plays off the warm embrace of that which we already have. It’s all rather spine-tingling, yet evades any sense of drifting into moribund territory. Unreserved in her need to create in her own way, it has provided the building blocks for a wonderful body of work of which The Girl I Left Behind Me serves as yet another important stepping stone to a greater goal. Wonderful music.