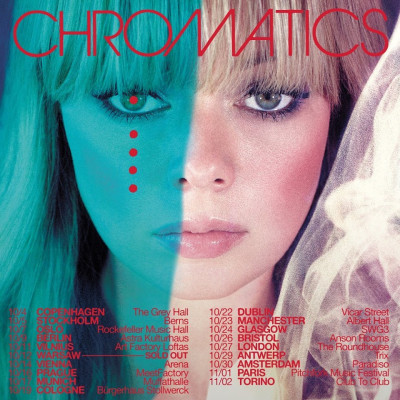 It’s a little disheartening to walk into a room and realise that you’re the least cool person there but given the occasion, it’s hardly surprising. The hangar-like Galvanizers  space in SWG3 is filled with a Vogue expo’s worth of style goths, Drive cosplayers and assorted lovely people of a stylish persuasion, all assembled for the debut Scottish appearance of synthwave pioneers Chromatics. On the plus side, at least the bands themselves can be counted on to make even the best of them looked underdressed.

Case in point, Double Mixte. Something of a surprise addition after In Mirrors’ removal from the bill, the Parisian duo’s spoken-word-meets-phat-beats shtick is so dripping with disaffected chic that the only way they could top it would be for them to have a lit cigarette perched on their fingers for the entirety of the set. While it is certainly stylish, there is no shortage of substance as the beats in question are urgent enough to get the blood pumping and feet moving, and though Clara Apolit’s bittersweet musings remain largely unintelligible to non-Francophiles, they’re delivered with enough confidence that she easily steals the show from bandmate and tunes alike.

Speaking of confidence, there’s no denying that Desire’s Megan Louise has it in spades. Walking out in a PVC Mac, martini glass in hand, she’s a Dynasty femme fatale come to life and within minutes she’s stalking the stage to the vampish ‘Mirroir Mriroir’ with enough verve to make Chromatics’ own Johnny Jewel, pulling a double-shift on synth duties, look like a shrinking violent. Louise struts, swoons and croons through the imploringly kitsch ‘Don’t Call’ and a flawless take on New Order’s ‘Bizarre Love Triangle’, backed by a slick projection reel that skewers the yuppie aesthetics of Desire as well as the shellac gloss of Jewel’s Italians Do It Better label. It’s just left to the dreamy call-and-response of ‘Under Your Spell’, an ear-worming gem that’s deservedly the one song to have crossed over to mainstream consciousness, to bring the curtain down; and it does so with enough oomph to bring tears to your eyes.

It might be coincidence that just as Desire sign off on one Drive soundtrack inclusion, so Chromatics open on another, but given Jewel’s detail-oriented M.O., perhaps not. Either way, ‘Tick Of The Clock’ is an entrance that suits the Portland troupe to a tee: louche and effortlessly smooth but with Jewel and Adam Miller delivering just enough menace to get the hairs on the neck standing on end. As the rest of the band join them onstage for ‘Lady’, the night rapidly flares up to a plateau that it never really comes down from for the next hour – a dreamy double-tap of ‘Kill For Love’ and ‘Night Drive’ more than making up for the long, painful wait to catch them live.

If there’s a word that sums up their set, it’s ‘consistency’. Between the set-list, the gorgeous visuals and the curation of the whole evening’s entertainment, there’s a sense of watching something that had been honed to perfection before anyone had even gotten a glimpse of it. The sound is immaculately crisp, Miller’s guitar slotting neatly between post-punk breeze and jagged-pop swagger, and a trio of covers towards the set’s end wink at nostalgia while staying true to the band’s idiosyncrasies.  The presence of Ruth Radelet is genuinely otherworldly. and she gifts their performance with an atmosphere that is lush in all the right ways; but it does make the one moment of spontaneity, namely Jewel’s time-out to thank his touring crew, stand out (and drag out) long enough to pull the room out of the bubble that they had spent so long creating.

Gripes like that (and the notable absence of anything from the just-released Closer To Grey) aside, there’s no doubt that Chromatics’ long-vaunted Scottish debut ticked all the right boxes: it was gorgeous, slickly executed and surrounded with an aura of mystery that is unmistakably cool (there’s that word again). Whether next time will deliver the same level of accomplishment is all down to Jewel’s vision; but at least now, the possibility of a ‘next time’ exists, and that’s got to be one of the night’s truest highlights. 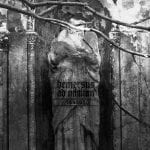