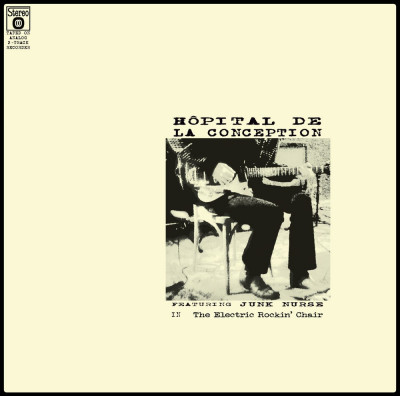 The beauty of underground music is that you never know quite what is gonna turn up from the murky depths. Coupled in with a label who knows their stuff (Cardinal Fuzz), then its always intriguing to hear something that has been dragged kicking and screaming from the depths of nowhere to see the light once more. Sometimes the music is best left alone, other times though, like with Hopital De La Conception, there is almost a mythical quality to it. That the band retain an air of mystery around who they actually are, makes this all the more intriguing.

A set of two lengthy instrumentals built around electric guitar, the meandering tunings and lo-fi fuzz perform the rather neat trick of sounding like something that should really be left alone. There is a grimy quality to it all which reeks of that layer of the underground that is below the underground. You dig? The places where only hardy souls venture in the depths of night after the hedonistic kick of The Heads has worn off and you need to find a come down. The nurse will help you, that is, the Junk Nurse who provides the requisite guitar thrills that you need, albeit wrapped up in a dirty syringe of chords and feedback. You thought Sonic Youth could sound filthy? You heard nothing yet.

The base grime that seeps through these two tracks picks at the itch that develops as you become increasingly entranced by the vision of the electric chair staring bleakly back at you. The music becomes a kind of Southern Gothic operatic cry of pain as it bursts forth from it’s bastard birth. Enveloping you in waves of distraught energy, it becomes a caressing un-soul ready to devour your insides, leaving just a spirit, lost but not alone, as other worthy travellers seek to experience the same music. It becomes an addiction, a cult, much like the rumoured videotape from Ringu, only instead of Sadako crawling out of a well and into your very fears, it is the ravaged sound of Hopital De La Conception. You probably need some sort of medical relief once its all over.

For those willing to seek further into what psychedelic music can mean then this is a perfect reminder that outside the underground is another layer of music which simply doesn’t fit anywhere. To the uninitiated it may sound simply unlistenable but to the seasoned traveller, it become a mantra for something more. That search to expand horizons and understand what it is that drives people to make such experimental music, albeit this time simply from a bastardised blues guitar.

Perhaps it’s the knowledge that whoever made this knew that they were never gonna make any money out of it, or that there are just some crazy fuckers out there who want to make you feel that you really have only scratched the surface of music out there, and that if you keep scratching that itch, then the real, pulsating soul of it all will start to ooze into your life. Either way, by the end of it all you are probably gonna be left staring into space.