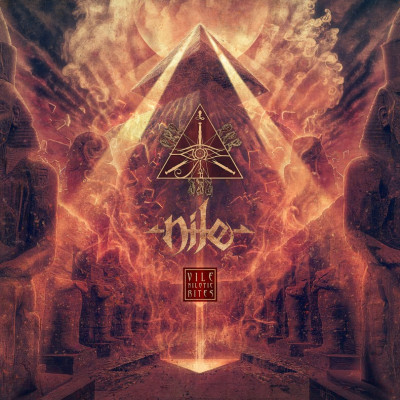 Death metal legends and Egyptian lore fetishists Nile have been a cataclysmic force in the scene for over 20 years. Their unmistakable brand of tech-death has seen them rage through eight crushing albums of plague-bringing metal, and now with album number nine, Vile Nilotic Rites, Nile prove that sticking to a winning formula works. Tech-death can go either way for me, it’s either brilliant or highly annoying, but Nile have always been at the top of their game and the industry, and a band who have always grabbed me by the throat. Their immersive themes are a whirlwind of vivid imagery and the savagery of their music always kicks up a sandstorm of face-peeling brutality.

With classics such as Black Seeds Of Vengeance and the outstanding In Their Darkened Shrines, Nile have plenty in their arsenal to show why they are gods of their own making. 2012’s At The Gates Of Sethu was a heavily criticised release due to its poor production qualities, yet was still by no means a poor album. What Should Not Be Unearthed allowed Nile to return to form with a refreshing and catchy follow-up that demolished much of the ill-will aimed towards At The Gates Of Sethu. 2017 saw the departure of guitarist and vocal-demon Dallas Toler-Wade, which left a gaping hole, but was quickly filled by Enthean vocalist/guitarist Brian Kingsland, whose meaty vocal-chords do a commendable job of replacing Toler-Wade’s frontman position, easing into the mix as if Toler-Wade never left.

Opening with lead single ‘Long Shadows Of Dread’, Nile quickly unleash what they do best, sending a frenzy of lightning staccatos and chaotic riffage hurtling from the catacombs. It’s a bold statement and a Nile through-and-through introduction that leads into the destructive ditty ‘Oxford Handbook Of Savage Genocidal Warfare’, which tears by like damned locusts buzzing up a storm of frantic stabbing chugs and skin-wrecking pummelling.

The album’s masterpiece comes in the form of ‘That Which Is Forbidden’, an old school, riff-charged beast with shades of Akercocke, packed with plenty of change-ups and killer blast-beats ripping along to dulcet choirs – always a winner. The monstrous ‘Revel In Their Suffering’ should sit at the top of Nile’s pantheon of classics, flaunting its gorgeous arpeggios, devastating blast sections and beastly riff hooks.

‘Where Is The Wrathful Sky’ continues to light this tremendous second half on fire, beginning with a distant ominous rumble of thunder and the patter of war drums that usher in a raging death-metal banger. The epic ‘The Imperishable Stars Are Sickened’ slows down the pace with its honed songwriting and complexity as does final track ‘We Are Cursed’, with both tracks seeing out the album in a restrained, interesting and nuanced way.

Vile Nilotic Rites is a juggernaut of an achievement built upon the sturdy stones of albums past, and filled with rare gems that will surely play alongside staples of Nile’s live catalogue for years to come. This is a band upping their game and then some. Solos and riffs are as wicked as ever and played with unrelenting vigour, from deep bone-shakers to high-flyers, flaying with hooks as tight as they’ve ever played. George Kollias commands the drums like a king upon the throne serving out some of their most crushing beats and devastating blasts. The three-pronged attack of Sanders, Parris and new vocalist Kingsland deals a punishing blow and makes for a spectacle live. This is Nile back with a vengeance with all cylinders firing. Vile Nilotic Rites is everything a fan would want in a modern Nile album and so much more. A flawless death metal album from the old legends that will possibly go down as one of the genre’s best!