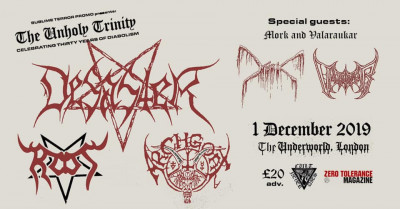 Desaster at The Underworld, Camden

Valaraukar might only have two members but they don’t mess around in delivering fast and furious death-thrash with Burzum chords and wild vocals – and there’s a good crowd here too considering that it’s a very early start at 6 pm, busy headbanging along. It’s often a poisoned chalice with double headliner – or in this case triple headliner – shows in that the crowd get to see an incredible line-up for one top-tier ticket-price, whereas the bands risk an uneven crowd, and potentially losing the build-up-to-the-last-band feel. Well Valaraukar get us off to a fine start, raging through bestial yet intricate riffs and delivered with a huge sound.

Mork ratchet up the energy even further and, bloody hell, everyone loves them. In what could really have been a fourth headliner (at which point it gets a bit silly) Mork maintain a pretty orthodox display of facepaint (bald guy as cracked egg, Clockwork Orange droog, the Panda, the Lone Ranger) alongside some no bullshit Norwegian black, starting at mid-tempo and becoming faster with material from their latest album Det Svarte Juv. I especially like the range of vocal styles going on, part nasty growl, part Enslaved-style rasp and mid-line shift to slightly-cleaner tenor (although not as high or clean as on some parts of the album), and the almost Dimmu–esque sense of scale at parts, impressive given there’s no keys. There’s plenty of nods to other classics, of course, suggesting Mayhem, Satyricon, Darkthrone etc, but Mork stand out from the black metal crowd fundamentally by the strength of their material – and they come Fenriz approved, if that helps.

Sometimes you just have to get bestial, albeit in a fully legally watertight manner, and at that stage it’s time for some more Archgoat. As Finland’s finest purveyors of grotty blackened war death since 1989, Archgoat don’t do surprises, bashing out a perfunctory soundcheck in their array of spiked gauntlets before returning to relentlessly pulverize the Underworld once again. While there are many of those peak-Archgoat moments when everyone comes in hard with the blastbeats – that snare sound! – and the crowd really starts getting wild, the set is unfortunately marred a bit by sound problems. Mainman Angelslayer keeps getting annoying whine from his bass, eventually ditching it to let the guitar fill out the sound on its own – a development that scarcely seems to impact upon the crowd who are getting rowdy as hell by now. Someone gets kicked out – for smoking presumably as I can’t see any crowdsurfing – as Archgoat play ‘Ug Ug Ug’ from their fourth album The Luciferian Crown (2018) and the glorious ‘Grand Luciferian Theophany’ from The Apocalyptic Triumphator, a personal favourite even if it rips off Beherit a little. ‘Hammer of Satan’ is a spectacularly Ronseal song title, which, with the whole band really locking in now, is an especially evil hammer continually landing on the anvil of your head. Archgoat’s between-song interstitials are almost as enjoyable and revolting as the band themselves – sex noise interlude, satanic keys interlude, pig slaughter interlude, etc. By the time we hear ‘The Apocalyptic Triumphator’ I’ve forgotten about the lack of bass, and most people are covered in beer, sweat and smiles.

Having never seen them before, my friend and I turned to each other at least twice during Root to ask, what the fuck did we just see? As stalwarts of the Czech extreme metal scene, Root vocalist Big Boss has had many decades with the band to hone his diverse vocal styles, release around 14 albums, found the Czech branch of the Church of Satan, finish his comprehensive facial tattoo, and generally style his image as an extreme metal version of a latter-day Charles Manson. So it’s no surprise that he uses a walking stick (goat-pommeled, naturally) and relies upon a chair and lectern. But the Boss is clearly not in any way ageing gracefully, staggering around gleefully, gibbering and laughing like Charlie’s prison days, growling convincingly and still knowing the right moment to nail the high notes (and when to let the others take over).

I don’t know the material well, but I do know they played ‘Cemetery’ (which sounds as early Venom would if they could, you know, play their instruments well and stuff) and closed with ‘666’, clearly a fan favourite. The pit goes into overdrive at this point, with a woman nowhere near the front getting knocked hard to the floor; while she’s picked up by more conscientious revellers, she might have had to leave the venue, and it’s worth remembering that there is such a thing as too crazy. Still, with so many interesting and varied ideas you really do need to go and see Root next time you can.

And finally onto tonight’s actual headliners, Desaster who are currently celebrating 20 years of Teutonic blackened-thrash. Wielding a further assortment of leather and gauntlets, with one member looking considerably more BDSM even than Archgoat, Desaster deliver about an hour of tight and aggressive songs, packed with intricate riffs, compelling solos, memorable melody, and absolutely unrelenting energy. They play a song that has something to do with the Roman Empire, a “very, very new song”, ‘Primordial Obsession’, and ‘Black Celebration’, fittingly dedicated to their anniversary, and even a ballad – although this may be a bit of a joke, given that it’s just a little slower and more melodic than usual; less ripping perhaps but hardly Bryan Adams. I do get the impression that Desaster have fallen victim to dual-headliner syndrome tonight, as the audience has been a little uneven throughout the gig: granted it’s a Sunday night but some seem to have left following Root – which is a shame given how much fun Desaster are and how effectively they whip up their audience with their warmly appreciative banter and rousing choruses. By the time they finish though, I think Desaster have clearly been added to the radars of a multitude of sweaty thrash-maniacs.

Regardless of the odd ordering and slightly uneven feel of the line-up tonight, it was clearly a monster, and further proof that anything stamped by Sublime Terror Promotions, Cult Never Dies and/or Zero Tolerance magazine indicates a grimly exciting badge of quality.