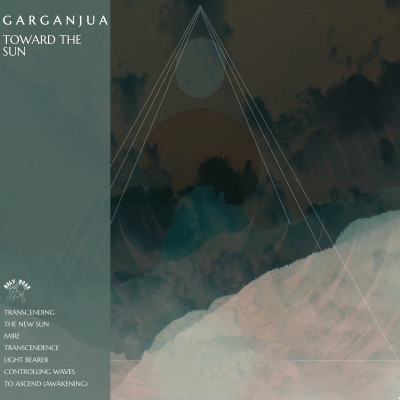 Toward the Sun by Garganjua

Here’s something I didn’t see coming, especially from this band: mindful doom. Yep, crushing, heavy, riff-laden boulders of doom that have the underlying message that it is worth focusing on the here and now. Unfamiliar, to say the least. And quite surprising from the very beginning of this third full-length album from Garganjua. It starts with a monologue from a man telling us the benefits of staying in the moment – a precis of a John Kabat-Zinn text, if you like – and questioning humankind’s “relationship with life”.

It is a surprise on two accounts: one, doom doesn’t tend to stray into the realms of self-help or positive reflection – it is usually more preoccupied with more dystopian elements like the state of the world, the songwriter’s mind and the malaise of the human condition, rather than offering any sort of solution or way out.

And two, Garganjua’s last couple of albums – A Voyage in Solitude and Through the Void – lived up to their titles: they were sullen, if extremely good, journeys through some dark passages. The four-piece didn’t seem the types to sing about the lightness of being – especially when the dude with the throaty death roars kicked into gear.

But this is a welcome addition to their catalogue, as well as a sign that there is still space for innovation in the dank, grey, dimly lit halls of doom. And it should be mentioned that the band have been hard at work since Through the Void, as we are treated to seven high quality songs, as opposed to four which made up each of their previous efforts.

After the monologue, we are treated to some melodic near-clean guitar, with some equally ethereal vocals, which introduce ‘The New Sun’. Then the producer, Chris Fielding (who made Garganjua’s last two records sound enormous and does another great job here), turns up the volume. And the riffs come. But here’s the thing: just as the subject matter doesn’t cover the usual well-trodden doom tropes, the music also offers more bang for your buck than the plethora of Candlemass-a-likes and Sabbath clones that detractors of the genre complain of. There are passages of uplifting chord progressions, quiet, almost post-something, segments and some genuinely affecting and subtle guitar solos.

One such solo occurs in ‘Mire’ and introduces a furiously fast phase of pure uncut atmospheric blackness. After a monstrous instrumental (apart from a little more from the spoken-word guy from the opener) song called ‘Transcendence’, comes the two highlights of the album: ‘Light Bearer’ and Controlling Waves’. The former is – how shall I put it? – as heavy as a fat man on Jupiter, while the latter is chock fill of riffs yet dominated by a delicate vocal refrain. And both offer hope, both lyrically and melodically. It may sound hard to believe, but trust me. I mean, check these lines from ‘Controlling Waves’: “We have gone too far to see the sun. But it won’t be long before our minds are open. Distant falling stars follow on your path. To the walk alone. Life is precious, hold on.” Who wouldn’t feel better after that – especially when those words are accompanied by thick, satisfying riffs?

‘To Ascend (Awakening)’ closes with a metaphorical exhale of breath – necessary after the exultation of the previous song – and with the addition of some subtle acoustic guitar, it appears to do its best to levitate the listener. It damn near succeeds. And finally we are taken back to the question we were asked at the beginning: “What is my relationship with life?” before the riffs abruptly stop. We don’t get an answer, but maybe that is the point.