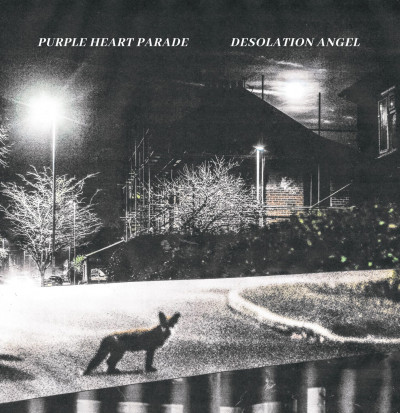 Manchester based psych heads Purple Heart Parade have been somewhat quiet of late, and so it is a very welcome return indeed. Purveyors of a noisy melody, their Ride inspired shoe-gaze may sound like a throwback to the early 90’s, but when they crank up that glorious sound, they simply sound like no other band on the planet. Laying down their template with the stunning ‘Petrichor‘, they waste no time in reaching for those glorious levels of cascading guitars which build into gigantic walls of sound. Within it all is the messianic form of frontman Peter Cowap II, who provides a suitably explosive turn as his words undulate through a quiet/loud aesthetic. At the moments when he reached the apex of his preaching you literally feel your whole body being lifted.

‘Sister Libra‘ carries another killer chorus, but just as inviting, is a more refined sound to the immensity of ‘Petrichor‘. Finding an inner beauty within the noise brings forth beautiful melodies which play off the more noisier moments. As it moves from on, the chaos of the song slowly drifts into the melancholy of ‘Red Rose Country‘, which owes just as much to the rock of 60’s West Coast California, as it does to any shoe-gaze conventions. Underlying it all is that attitude, the perfect prescription for a tripped out mind.

As if PHP haven’t impressed enough already, its down to the absolutely stunning ‘Starwheel‘ to elevate them from a great band to something much more special. Built on the classic epic ‘gaze sound, it’s one of those mid-tempo build-ups that uses melody and harmony as its key to triggering the ultimate release. It shows a band who are totally in tune with each other, as they instinctively create a sound made for triggering your mind into a trance. In fact, for all your staring into the distance in awe moments, PHP have it all nailed down.

‘Desolation Angel‘ finishes by reviving that melancholic edge that made ‘Red Rose Country‘ stand out, but also displays an innate sense in what works best on a music release. They could so easily chosen the easy option and gone with the classic epic closer, and lets face it, ‘Starwheel‘ would still have been perfect, but instead they choose to bring you down slowly. It’s an almost gentle end to a release which hits you right in the feels and elevates your soul. Did we say messianic earlier? There’s certainly something spiritual about this release, and it’s not just that good old Northern cheer. The year is barely out of the starting blocks and already the bar has been set ever so high. An absolutely essential release.