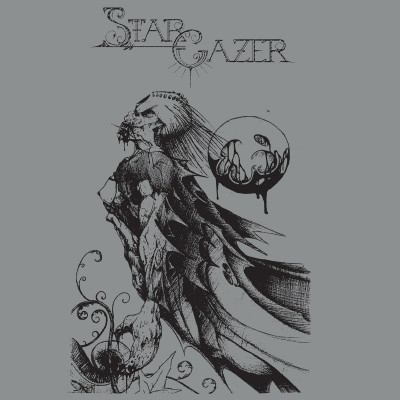 Remember that first time you heard ‘Rational Gaze’ or ‘New Millenium Cyanide Christ’? How you were so blown away, so stunned that something so eternally baffling could exist? What about when you went back to Meshuggah’s early ’90s material and found a Metallica tribute act with some weird industrial dabbling? Well, delving back into StarGazer’s earliest releases is a similarly alienating experience – even if the material doesn’t quite match up to the ambition they are now renowned for, checking it out is still a worthwhile proposition. Especially if you like your death metal raw, uncompromising and occasionally brain-scrunchingly technical.

Gloat / Borne pulls together their ’97 Borne EP, much of the ’96 Gloat demo (the rest of which was re-recorded for Borne anyway), as well as a handful of comp and split entries, all of which has largely been pulled together as-is. While this does sometimes result in sound quality jumping around mid-record, the upside is that the fury and aggression are kept completely intact. ‘Conquer Perennial Fire’ kickstarts the collection with an unwavering focus that’s near-bestial, a frantic battle between nanosecond-tight percussion and mechanical riffing that quickly shifts gears into something more outre, toying with tempos before going completely off the rails in spectacularly avant-garde fashion towards its climax.

Not every cut here seeks to repeat that template but most take some stab at playing with genre tropes, like in the piercing to-and-fro chaos of ‘Interrestrial Black Twilights’ or in ‘Ride The Everglade Of Regniroro’, a song that manages to nail both the thrash and death metal components of the band’s sound while being seemingly devoid of order or structure, pinballing from one extremity to another and crushing skulls all the while. Of the non-demo/Borne tracks, ‘Final Winter Kiss’ proves an especially worthwhile inclusion for both its scale and the blackened intensity of its guitar work, and the instrumental ‘Outro’, though woefully brief, demonstrates some measure of restraint by opting for a mid-paced gallop and spacey acoustics over outright fury.

Part of the reason such weirdness works so well is down to the sharp interplay between The Great Righteous Destroyer and The Serpent Inquisitor (a.k.a. Mournful Congregation’s Damon Good and Denny Blake), a partnership that even in the early days was showing off intuitive yet unorthodox rhythms as standard, as well as being able to segue organically between disparate tempos and time signatures without disrupting the compositions’ punishing flow. In an odd way, even the production is a boost. These songs sound filthy, as though having just been freshly dragged up from the grave, and  the guitars are given plenty of muscle and sinew, rendering them just cutting enough to make Paul Murphy’s drumming seem massive in comparison.

At its core, this comp is still of niche appeal. These songs didn’t change the face of metal but neither is it a mere curiosity for fans looking to fill a couple of gaps in the collection and no-one else. It’s an intriguing look at the roots of a band who have carved out their own place in the death metal universe as well as a glimpse of the state of Australian extreme scene in the mid ‘90s, one that birthed no shortage of great and truly genre-defying bands (many of whom counted StarGazer as their home at some point or another). Give it a chance, it’s more than worth the effort.