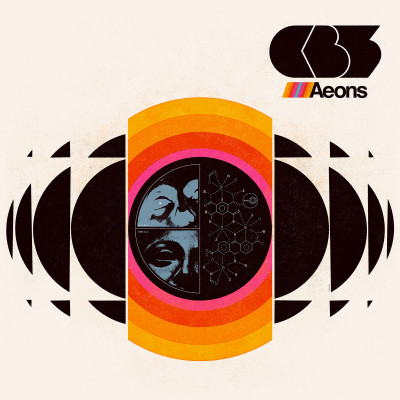 Coming at you like the bastard son of early Pink Floyd and any period Hendrix, CB3(Charlottas Burning Trio) waste no time in getting to grips with their revved up space rock and roll. Greased out riffs to the max, it may be all too Neanderthal but their back to basics approach is just what you need for a heady Saturday night in the land of getting high. Top grade monster psych-heads, the Swedish band have never been one for subtlety, so its great to see they continue that tradition on new album Aeons.

Indeed, as the dinosaur roar of the riff on opener ‘Zodiac’ attests, we are not here for a nuanced approach in the intricacies of space rock. Instead CB3 choose the straightforward route of pummelling you into submission. It could almost be too simplistic and if you haven’t heard CB3 before you may wonder what all the fuss is about. That “what-abouttery” comes into play around about third track ‘Acid Haze’ as you slowly realise that whilst you may have still been nodding along to that incessant riff, the band have seemingly opened up another part of the universe. Cleverly leading you ever so astray, they then cast you three suns to the left of a mighty big black hole with no hope of ever getting back. Watch out for the winding guitar which drags you to it’s epic closure.

‘Warrior Queen’ takes things even further as the band abandon all hope of ever getting back to that straightforward riff, and start poking around in places that no-one really has no business poking around in. You know those places that really come alive after a joint or two, or even more strictly, a tab or two…that’s just where they head. Meandering psychedelic interludes, built to stretch your mind in several different directions at once, the worrying thing about it all is how organic it all sounds, like this is some kind of natural state. Maybe it is, maybe we’ve all been looking at things the wrong way round. Or it could all be some kind of weird cult. Who knows? Who cares, when the music is this good.

As if all that wasn’t weird enough CB3 decide that now may be a good time to just simply throw in some 80’s sax into the mix. Yes, you got that right, the kind of sax last heard on the tail end of a Michael Bolton record from 1987. The kind of sax which probably invented Moonlighting featuring Bruce Willis and Cybill Shepherd. Hell, it probably is Bruce Willis playing the sax, who knows!. Anyway, it’s the last chance saloon and if you are going to go out on a high, then this is the one. Tremendously head-fucking, it kinda sums up the whole delightful album.

So go ahead and taste the sweet high of CB3. Brazenly rock and roll, and fucked up psychonautical explorers, on Aeons they deliver an almighty slice of space rock, primed to leave you aghast at the thought of ever having to come down and face the real world again. Then again, faced with the realities of life, why would you want to anyway? Go on, buy it, play it, then play it again.