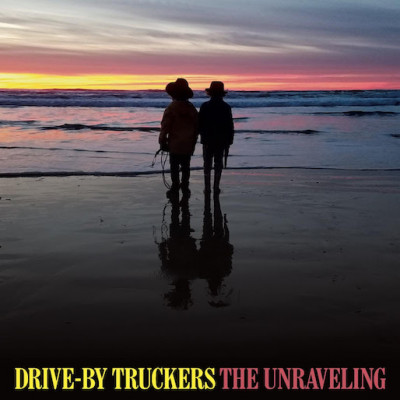 The Unraveling by Drive-By Truckers

Whilst politics has never been too far away from the music of Drive-By Truckers, of late it has become much more directly focused. Their last album, American Band, rallied against the trend in populism and Trumpism, with their ire particularly aimed at gun laws. It was the sound of a band understanding the very roots of the America they loved and came from was under attack from forces out of their control. Democratic processes were being warped, and there was a sense of misjudged anger which fed into the breed of populism pounced on by Trump.

A few years later, and nothing much has changed. The Unravelling is yet another blunt album of politically charged songs which cut to the very heart of Trumpism and America as it is now. The band may have built their catalogue in Southern Rock epics such as Decoration Day and Southern Rock Opera, but a much leaner direct sound aims to leave their legacy intact as a band who cared enough to fight against what they saw was wrong. A quick glance at the comments on the release of first single ‘Thoughts and Prayers’, an anti-gun song, was enough to see how much they had divided their fans. Drive-By Truckers have managed to cut right to the heart of a split country, and unravelled the hurt within.

Whilst that song follows much the same path as one from American Band, or even English Oceans, elsewhere their are powerful anthems of desperation such as ‘Armageddon’s Back in Town’, or the bleak truth of ’21st Century USA’, a paean to the damage that capitalism has reaped upon working towns, and all the false promises that are sent to alleviate their anger. Gone are the storytelling songs of old, and in place is a much more mature kind of writing which holds a microscopic eye on society, and channels the ills that it sees into a series of songs which stand as some of the best that Patterson Hood and Mike Cooley have written.

It’s testament to how far this band has travelled down their chosen path that a song such as ‘Babies in Cages’ could only have come from this iteration of the band. In the past they may have entered a more nuanced stance and smothered the song in rollicking guitars, whilst here the music is much more subtle and quieter, allowing the lyrics to stand out. It betrays a confidence in the themes and ideas put forth in the songs, with the band happy to let the words do the talking. Of course, we are talking about two of the great Americana songwriters here, in Hood and Cooley, so we should expect nothing less. Indeed, Cooley takes one of the highlights of the album with the acerbic ‘Grievance Merchants’.

Whether by plan or accident, Drive-By Truckers seemed to have arrived as a band for the moment in US history, and their recent songs have struck a political resonance which firmly entrenches them in the times. No longer simply a Southern Rock band, they are now a band with a “message”, a band who cares, and a band who want to change things. They were always a great band, now with yet another excellent album under their belt, they become one of the essential American bands.